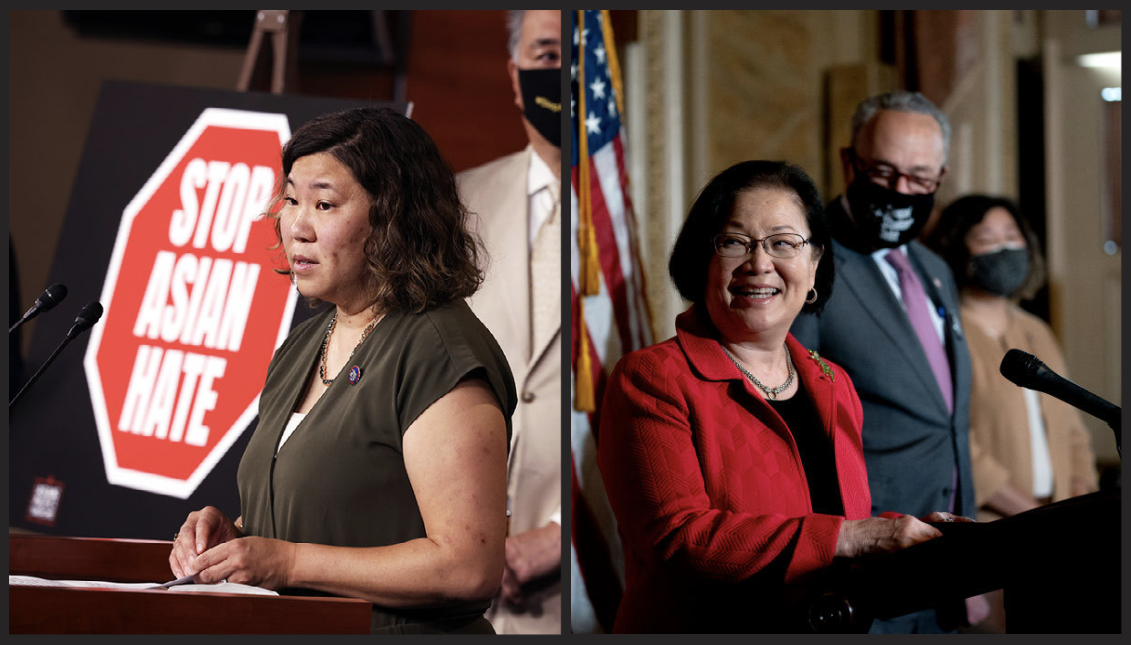 The bill is in response to the massive uptick in hate crimes, especially those targeting AAPI individuals, over the past year. Photo: Kevin Dietsch/Stefani Reynolds/Getty Images

The letter comes weeks after a recent FBI report revealed that the number of hate crimes last year was the highest in more than a decade.

Two Asian American lawmakers are asking the Justice Department to provide updates on the COVID-10 Hate Crimes Act, which was signed four months ago.

On Monday, September 20, Senator Mazie Hirono and Rep. Grace Meng sent a letter to Attorney General Merrick Garland urging the implementation of key provisions of the act that are “critical to its effectiveness.”

In the letter, Hirono and Meng highlighted the increased violence towards elderly Asian Americans and the Atlanta spa shootings that killed eight people, six of whom were women of Korean descent.

The letter comes weeks after a recent FBI report revealed that the number of hate crimes last year was the highest in more than a decade.

According to the report, more than 10,000 people reported to law enforcement last year that they were the victim of a hate crime due to their race, sexual orientation, gender, religion or disability.

“We request your attention to these matters and periodic updates on your progress as you continue to implement the COVID-19 Hate Crimes Act and work to reduce the violence from xenophobia and hate in our country,” the letter read.

President Biden signed the legislation, co-sponsored by Hirono and Meng, on May 20, after it won bipartisan support in Congress. It directed the Justice Department to speed up the review of pandemic-related hate crimes reported to law enforcement agencies to help them create ways to report these incidents online and to conduct public outreach.

Although the letter commended Garland’s efforts to combat hate crimes, it requested that the Justice Department dig deeper into establishing online reporting for hate crimes and other incidents.

The letter referred to a recent analysis from the reporting tool Stop AAPI Hate, which showed that over 9,000 anti-Asian bias incidents occurred within 15 months during the pandemic.

In a new report by @StopAAPIHate, between March 2020 and June 2021, there have been more than 9,000 anti-Asian incidents include verbal harassment and physical altercations. More than 63% have been reported my AAPI women. #StopAsianHate #StopAAPIHatehttps://t.co/KEOl4Uuf6A

Hirono and Meng explained that not all of these incidents, such as shunning and verbal harassment, can be classified as hate crimes, “the impetus for these actions are the same — fear and xenophobia.”

They said that in order to successfully address the root causes of this bias and animosity, there needs to be a “clear and full picture of the scope of the problem,” and that hate crime data alone is not enough.

The letter also requested an increase in public education campaigns intended to raise awareness of hate crimes in multiple languages to encourage victims to come forward with their experiences.

The lawmakers also called for the law to be applied to all hate crimes occurring during the pandemic, citing antisemitic attacks in May, and the deaths of at least 44 transgender or gender-nonconforming people last year.

The letter concluded by sharing concerns that as the pandemic goes on, frustration over the virus will “undoubtedly resurface,” and with it, more hate incidents.

The Covid-19 Hate Crimes Act was signed into law in May. The authors of the bill, Sen. Mazie Hirono and Rep. Grace Meng are urging the Justice Department to swiftly implement the law.https://t.co/QIkuXWYqxZ pic.twitter.com/R0vp8V9OzG

"We fear the impact this could have on perpetuating hate-based violence against people," the letter stated. "Full implementation of the COVID-19 Hate Crimes Act will help stem the tide against further violence."