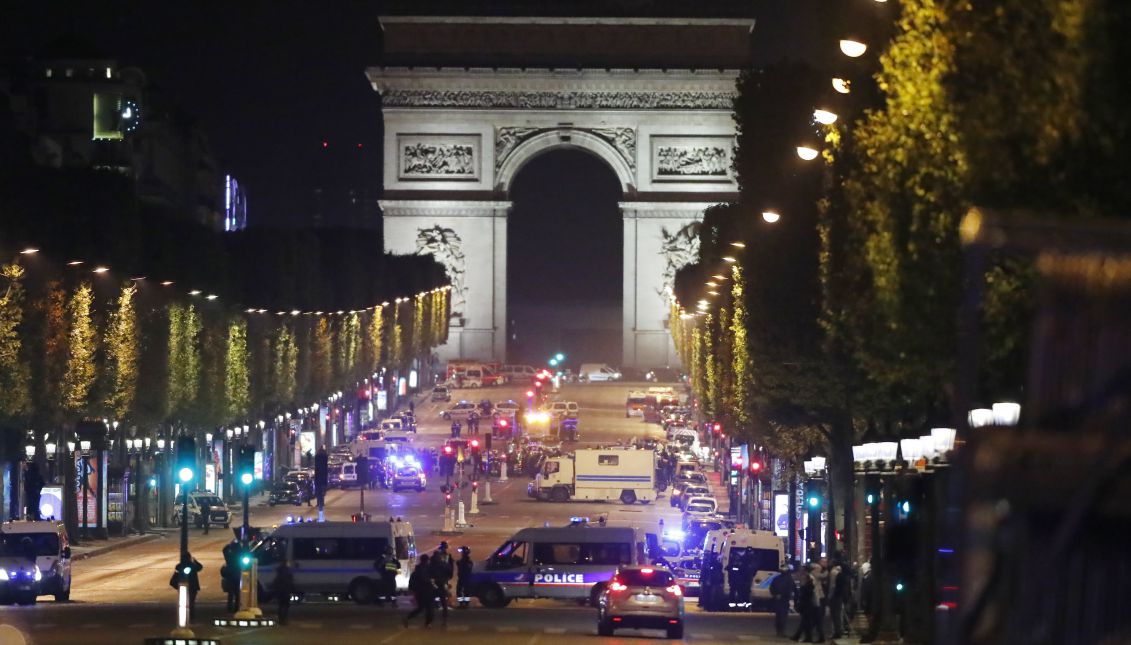 French Police officers after a shooting in which two police officer were killed along with their attacker and another police officer wounded in a terror attack near the Champs Elysees in Paris, France, 20 April 2017. EPA/IAN LANGSDON

Paris Shooting: Could the attack influence the elections?

At least one policeman has been killed and two wounded in a shooting incident in central Paris, days before the first round of the French presidential election.

At about 9pm the man drove a car up to a parked police van full of officers. He got out of the car and fired an automatic weapon, killing one officer in the van, before shooting at others who were standing on the nearby pavement, injuring two before he was shot dead by police.

The French president, François Hollande, said the Champs Élysées attack was “terrorist in nature” and promised “utmost vigilance” by security services to ensure security around the presidential election. He has called a defence council meeting for 8am on Friday.

Islamic State claimed responsibility for the attack in a statement by the jihadi group’s propaganda agency Amaq. According to AFP, the statement said the attacker was one of the group’s “fighters” known as Abu Yussef, “the Belgian”. The statement offered no evidence to support the claim.

Local media say the 39-year-old lived in the city's suburbs, and had been seen as a potential Islamist radical.

French police are also hunting for a man who has been identified by Belgian security services, an interior ministry spokesman says.

The question now is: could the attack influence the elections?

The 11 candidates standing in Sunday's closely fought presidential election were engaged in a final joint TV appearance to argue their policies as the attack happened, as reported in the BBC.

Marine Le Pen, of the far-right Front National, tweeted: "I feel for and stand by our security forces, who have been targeted again."

Centre-right contender François Fillon also went on Twitter to pay "tribute to the security forces who give their lives to protect ours".

Independent centrist Emmanuel Macron said during his TV appearance that it was a president's "first duty to protect" and he expressed his "solidarity" with the police.

Ms Le Pen, Mr Fillon and Mr Macron have announced they are cancelling campaign events scheduled for Friday, the last day of canvassing for votes.

Surveys so far have shown voters more concerned about unemployment and their spending power than terrorism or security, though analysts warned this could change in the event of further violence, as reported in France24.

However, the French public is no stranger to terror attacks and it is unclear how many would alter their voting decisions based on Thursday’s attack.

French President François Hollande promised "absolute vigilance, particularly with regard to the electoral process" and paid tribute to the police.

Hollande, who said he was convinced the shooting was a "terrorist act", cancelled a trip to the northwestern region of Brittany and will chair a security cabinet meeting on Friday.