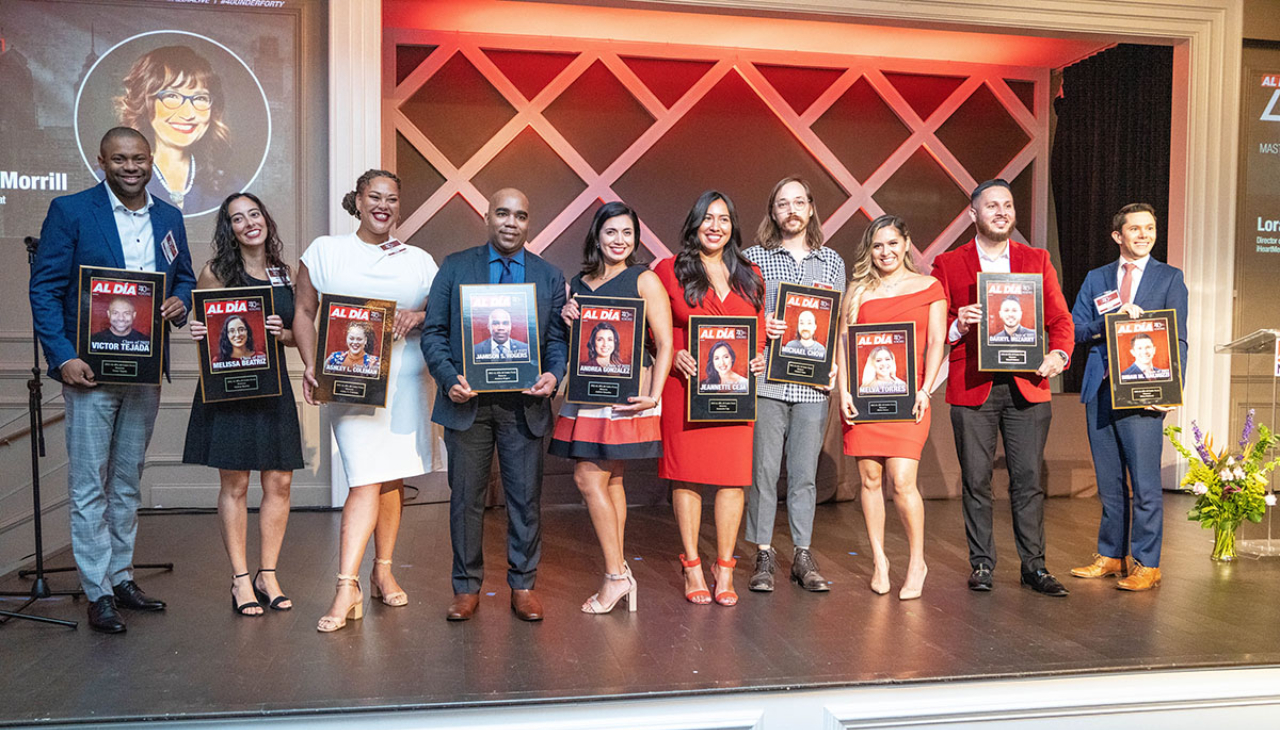 2022 AL DÍA 40 Under Forty: A Glance into what the Future of Philadelphia leadership looks like

The AL DÍA 40 Under Forty celebration displays the future landscape of the city of Philadelphia, guided by the work of our young generation of leaders.

Over the past three years, Loraine Ballard Morrill has just about established herself as the unofficial official voice of the annual AL DÍA 40 Under Forty celebration.

As her familiar and distinct voice echoed across the room at The Vie by Cescaphe, all nearly 300 people present knew it was about celebrating the young generation of professionals driving our city towards the future.

“It is truly remarkable to see the evolution and impact of this program,” said Ballard Morrill, who has served as the event’s emcee each of the three years the event has been held.

After being held virtually during its first iteration, the second edition last year marked the first in-person event AL DÍA had held since the start of the pandemic.

Year three marked the latest chapter of what is shaping up to be one of the premiere annual AL DÍA events.

“In the short span of three years, AL DÍA’s 40 Under Forty has expanded to become one of the most talked-about events for young professionals in the city of Philadelphia,” said Hernan Guaracao, AL DÍA Founder, Publisher and CEO.

As one of the most diverse and densely populated cities in the nation, Philadelphia is setting itself apart from many other cities, and the annual AL DÍA 40 Under Forty event is living proof of how strong the leadership in the city is.

“Our very diverse honorees tonight — in my humble opinion — represent the future of Philadelphia,” Guaracao added.

The inaugural AL DÍA 40 Under Forty Class represented the changing of the guard of young leadership in the city who will be — or have already started — rising up the ranks in the coming years.

The second class reiterated the distinction, and this year’s class just magnified it even more.

Elizabeth Flores, Vice President of News for NBC 10 and Telemundo 62, shared such.

“As I looked around and I walked in, I just felt so inspired by the room filled with diverse young professionals,” she said. “Hopeful for our future, inspired by tonight’s honorees who are already making an impact in our community.”

As four of this year’s judges — Bridgett Battles, Evan Urbarnia, Jimmy Contreras, and Blane Stoddart — called out the names of this year’s honorees, the audience clapped in celebration for the inspiring work being done by the young leaders.

This year’s class was diverse in every sense of the word; from each of their unique backgrounds to their respective industries. However, their goals hold uniformity.

Whether it’s law, public service, entrepreneurship, media and everything in between, each honoree is a leader dedicated to uplifting their communities towards a better, more equitable and inclusive future.

Many of the honorees who made up the 2022 AL DÍA 40 Under Forty class were eager to express their appreciation and gratitude for the honor.

For Darryl Irizarry, the honor makes him reflect on his background as “a kid from North Philadelphia who always knew he could do so much more in the midst of being in an environment that was kind of impoverished.”

To him, the honor represents the journey that it takes to achieve success.

“I really appreciate this honor because it allows me to show others that they can do it,” said Irizarry.

Shawnna Williams noted that while she prefers to be out of the spotlight, the honor is a culmination of her career to date.

“It feels great to be recognized for years of hard work and networking and building these relationships,” she said.

Given the talent of the fellow honorees and the passion each one shows in their respective industries, it motivates her to continue doing more.

“I find that to be humbling, but I also feel welcomed in this space,” Williams added.

While the honor features a singular name on each plaque, Nigel Charles noted that while the honor feels good from a personal perspective, the real importance lies in the collective.

“This feels like really an honor for all of us,” he said.

Those are just three individuals. However, they and the young leaders honored in past years represent the future landscape of our city.

“Leadership is really an exchange,” Charles added. “It’s an exchange of what I have to offer, and I get so much from those interactions, as well.”

To truly push our society forward, diversity, equity and inclusion must be at the forefront.

“It’s important city-wide,” said Williams. “I feel like all these individuals really take the advancement of DEI to heart and embed it in what they do on a daily basis, and it also goes beyond the workplace.”

Irizarry added, “Our future is bright.”

Each year, this event adds more validation to the progression this city is sure to make in the years and decades to come.

The work of these young, diverse and impactful leaders will go a long way toward shaping the future, and it starts now.