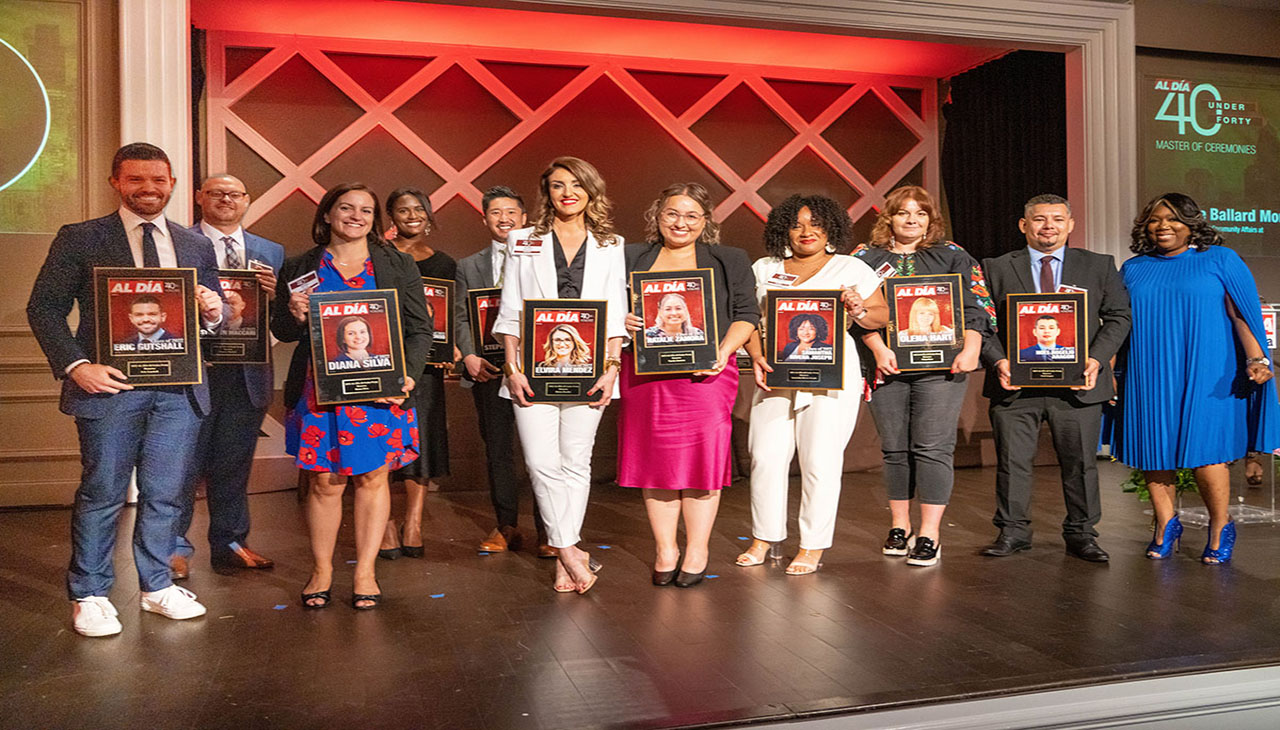 AL DÍA’s third annual 40 Under Forty recognized many young, diverse professionals for their successes within their respective industries.

While the event served to highlight impactful individual professionals across the Philadelphia region, it also served as a call to action to continue this impactful work.

After two years, AL DÍA has recognized and awarded 80 individuals who have earned recognition for their services across the city of Philadelphia.

This year’s honorees were selected by a panel of 10 judges, most of which were in attendance and shared their thoughts on the event’s premise.

“I am happy to be here with the next generation of young leaders who are fantastic,” said Evan Urbania, CEO of ChatterBlast Media.

Jimmy Contreras, Vice President, U.S Regional Communications at JPMorgan Chase & Co., noted he is thankful that the event took place in person, rather than on Zoom and was honored to be on the advisory board.

The night began with Latina DJ Jholi playing music for the crowd in attendance, as the attendees networked with each other.

During the annual event, some of the honorees spoke with AL DÍA to share their thoughts and feelings on the event.

"It is such an honor to be here. I am happy to be part of the 40 under Forty. It's great to be here and celebrating everything," Amaris Hernandez Padgett told AL DÍA.

"It's an honor to be here and there are so many people to be honored here also. I am so happy to see all these amazing people here," Ashley Coleman told AL DÍA.

Keighan Z. Gunther and Jamison Rogers also had positive things to say about being at the 40 Under Forty event.

"It's great to be here and a good way to have a good Friday night," Gunther told AL DÍA.

“I feel great about being here with so much diverse talent, seeing and meeting people and making connections,” Jamison Rogers told AL DÍA.

He also shared what he believed made this year’s honorees special.

“Diversity and inclusion is what makes this group tonight wonderful,” Rogers added.

In addition to sharing their thoughts on the event, some honorees also provided some information about what makes them leaders within their industries.

“I run a company as the founder. My team and I help restaurants sell their food through applications. We work in Philadelphia and recently arrived in New York. It 's what we try to do,” Tejada, founder and CEO of the Delivery Guys App, told AL DÍA.

“I’m a director of partnership for the Philadelphia Convention and Visitors Bureau, which means I am recruiting partners from around the City and providing an engagement program for them,” he said. “I am excited that I was even given the privilege to be honored.”

As happy as the 40 under Forty honorees were, Elizabeth Flores, VP of News from NBC10/Telemundo 62 felt she could still inspire many from what she learned on her career and personal journey.

"Each of you truly inspires me as I'm filled with inspiration tonight. I hope to inspire this generation of leaders with one important message I learned throughout my professional and personal journey: Please lift as you rise. I know I wouldn't be here tonight if someone did not lift me as they rose. To lift as you rise does not mean you have to be at the top,” Flores said.

By the call of four judges, this year’s 40 honorees were called on stage in four groups of 10 to retrieve their plaques, qualifying their impact and successes within their respective industries, despite their young ages.