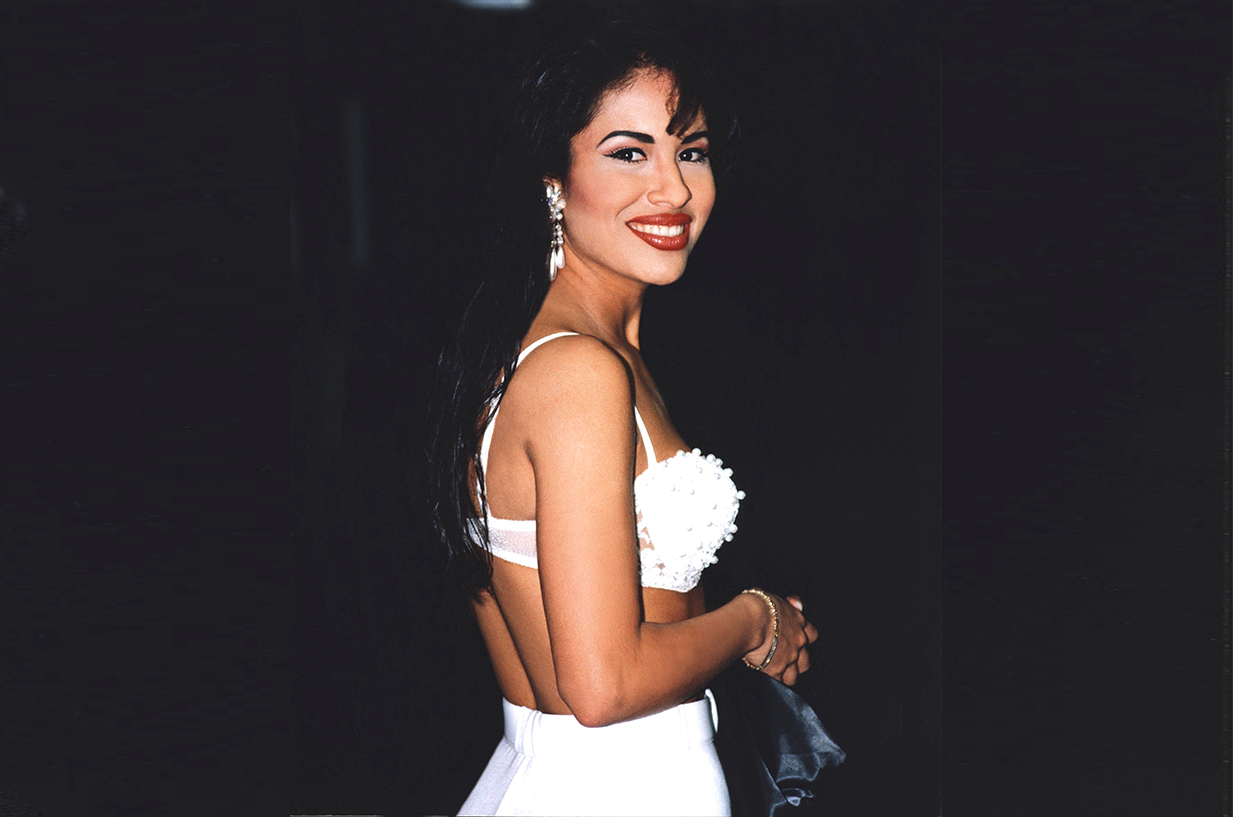 Selena Quintanilla-Pérez, Queen of Tejano music and adorer of greasy slices of pizza, whose life was tragically cut short at the peak of a promising career and…

At eighteen, she released her self-titled debut album. At nineteen, she sold the first Tejano record to achieve gold status. At twenty-one, she eloped with her “forbidden lover” and got married to the lead guitarist of her band; months later, she released her breakthrough album that would become certified 6x platinum. At twenty-two, she simultaneously launched two fashion boutiques while releasing the Grammy-nominated and certified diamond Amor Prohibido.

At twenty-three, while working on a bilingual crossover album, preparing for a benefit concert for the Texas Boys & Girls Clubs of America, and sowing more of her trendsetting costumes, Selena Quintanilla-Pérez, was macabrely murdered by the president of her fan-club, Yolanda Saldívar, leaving a 392-foot trail of blood at a Days Inn in Corpus Christi, Texas.

Posthumously, the Mexican Madonna and enthusiast of decorative bustiers, garnered a prolific amount of success, spurred groundbreaking records, and opened the doors for breakout roles and genre-bending talents. Though her life was tragically cut short at the peak of a promising career and at the prime of her life, the Queen of Tejano music and adorer of greasy slices of pizza’s legacy was to grow in strength and in numbers exponentially. This began only a week following her death on March 31st 1995 with her commemorative issue for People being the first to ever sell-out, a demand that inspired the creation of People en Español, Newsweek en Español, and Latina. These two decades since the shooting in Room 158 have been marked by remembrance and celebration of the artist, including speculation of what she could have been had she lived, and the ways that she paved the road for acceptance and equality for Latina women in a highly-chauvinistic culture and male-dominated industry. Memorial tours carried-on by her band, Los Dinos (fronted by her brother, her sister, her widow, and her father), multiple documentaries and true-crime specials, the 35x certified platinum posthumously-released Dreaming of You, the cult-classic film starring J.Lo, a Broadway musical, the best-selling celebrity cosmetics line in history, and several new endearing epithets: “Chicana Elvis”, “Hispanic Marilyn Monroe”, and the “Tupac Shakur of Latin music”.

Less than a week ago, Google acknowledged Selena on the anniversary of her self-titled album. The Doodle includes a sweet, animated mini-biopic to the tune of Bidi Bidi Bom Bom, and a link to a limited virtual tour of The Selena Museum.

An icon for musicians, dancers, designers, feminists, WOC, Latin Americans, and the LGBT community, Selena will now be immortalized on the Hollywood Boulevard as a star on November 3rd 2017, alongside another “Corpus Girl”, Eva Longoria at the front of Capitol Records. She will join the other notable Latinas immortalized on the Boulevard: Christina Aguilera, Gloria Estefan, Celia Cruz, Katy Jurado, Rita Moreno, Dolores del Río, Cristina Saralegui, Lupe Vélez, and Carmen Zapata. Mayor Garcetti of Los Angeles will be further honoring her by naming November 3rd “Selena Day” in the city, which deviates from “Selena Day” in Texas, celebrated on her birthday (April 12th) and declared by George W. Bush two weeks after her death. Her sister, Suzette, will be in attendance to receive the honor on Selena's behalf.