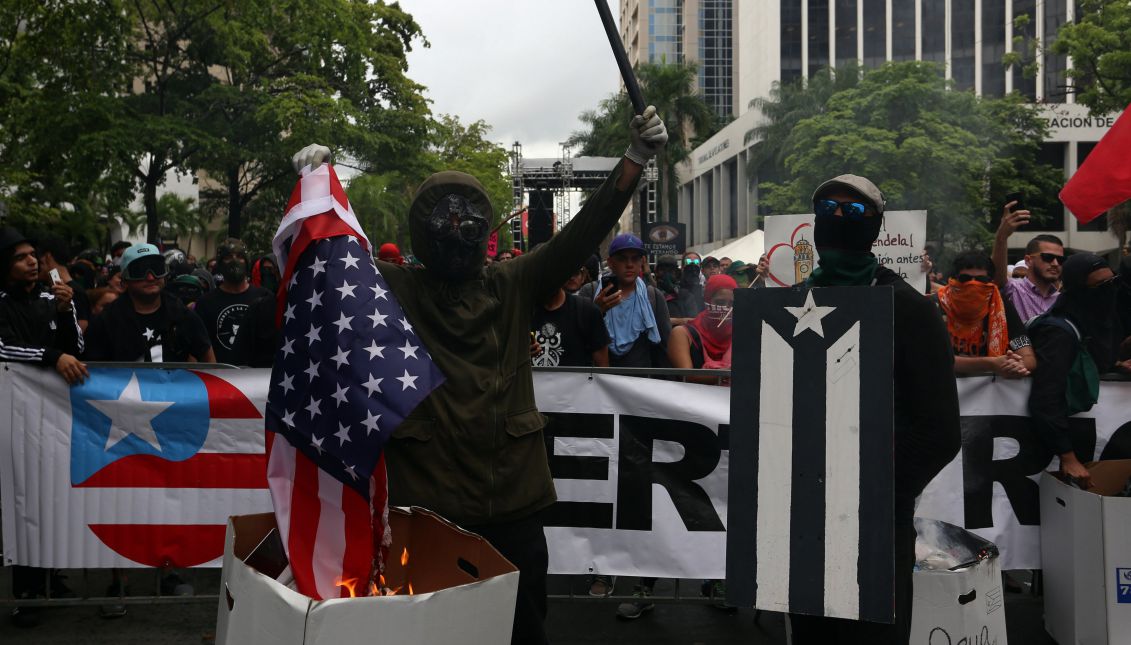 People demonstrate during the general strike against austerity measures, which coincides with the International Workers Day, in San Juan, Puerto Rico, May 1, 2017. EFE/THAIS LLORCA

Puerto Rican police arrested five people on Monday during a general strike and street demonstrations against austerity measures and government spending cuts on the island.

The Hato Rey district, the financial zone in the capital of San Juan, was the scene on international workers day of acts of vandalism by protesters, who broke windows and otherwise damaged buildings housing bank branches at the end of the main demonstration.

The main streets in the zone were the stage for clashes between security forces and some masked demonstrators who caused damage to important buildings like the Popular Center and the Oriental Bank.

The general strike was adhered to in other cities around the island, with unions, social and student organizations calling people onto the streets to protest social spending cuts implemented by the administration of Gov. Ricardo Rossello, as required by the Financial Oversight and Management Board, the entity put in place by the US Congress to deal with the problem of Puerto Rico's relatively massive debt.

Rossello called the vandalism "criminal acts" and issued a statement saying that his administration will "go after those responsible," adding that "we're going to ensure that all those who commit criminal acts feel the full weight of the law."

Meanwhile, Puerto Rico police superintendent Michelle Hernandez said that the force she commands "does not have" and "does not use" tear gas or rubber bullets, in contrast to complaints by some demonstrators.

Public Affairs Secretary Ramon Rosario said that despite the strike and demonstrations, all government departments and entities were functioning normally, along with electricity and water services.

The San Juan airport was operating normally, he said, except for early in the day when some demonstrators blocked access routes to the facility, but there were reports that some of the island's main highways were cut and public transport in the capital was only partially in operation.

Meanwhile, the state-run University of Puerto Rico remained closed, as it has been for weeks, while the Education Department reported that more than 90 percent of the island's teachers showed up for work on Monday.