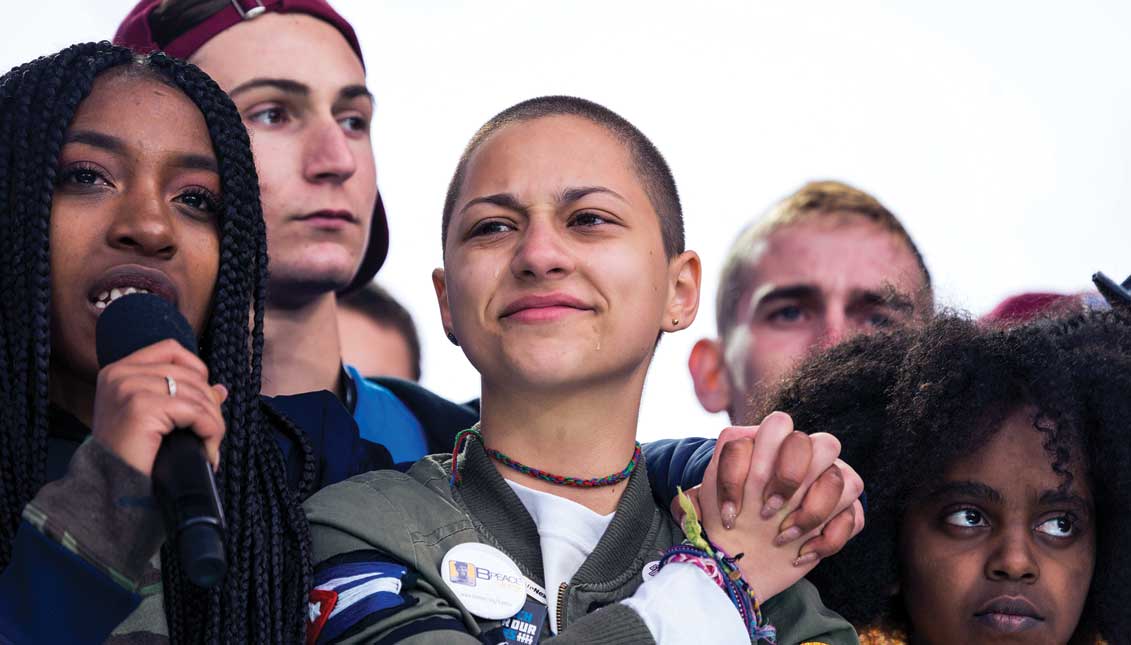 Emma González during the March For Our Lives rally last week in Washington D.C. Photo: EFE.

The Merchants of Death Between a Rock and a Hard Place

Yes, between a rock and a hard place.

That’s where, thanks to the nation’s youth, all the mostly Republican elected officials, political operatives and sycophants who have been in bed with the NRA for years find themselves after Saturday’s March for Our Lives.

The march was spearheaded by the kids who survived the shooting at their Marjory Stoneman Douglas High School, in Parkland, Florida that left 17 people dead.

I must admit I am having a great time watching the Marco Rubios, Ted Cruces and Mario Díaz Balarts of this world sweat and squirm of fear for what the future, unavoidably, will mean for them and all the other “leaders” who benefit from NRA’s blood money in exchange for enabling the carnage of our children.

“If you listen real close you can hear the people in power shaking,” said on Saturday 17-year-old David Hogg, a Parkland survivor and student leader to the more than 800,00 people gathered in the nation’s capital demanding gun control laws that protect people and not the NRA and the merchants of death they represent.

“96 people die every day from guns in our country. Yet most representatives have no public stance on guns. To that, we say, no more,” Hogg added to roaring approval from the crowd. Then the thin, tall teenager issued a warning to all the corrupt and heartless politicians who love guns –and NRA money-- more than their own children: “We are going to make this a voting issue. We are going to take this to every election, to every state and every city. We are going to make sure the best people get in our elections to run, not as politicians, but as Americans.”

You bet they are, as the hundreds of thousands of people who attended the Washington rally and 800 other marches and rallies all across the U.S. will make sure of it.

The reactions from the NRA and the corrupt politicians and hangers-on of the Right, sick as they have been, ooze desperation.

“The debate after #Parkland reminds us We The People don’t really like each other very much. We smear those who refuse to agree with us. We claim a Judea-Christian heritage but celebrate arrogance & boasting. & worst of all we have infected the next generation with the same disease,” tweeted Rubio, who seems to have found religion now that his popularity has hit rock bottom.

But despite Rubio’s hypocritical holier-than-thou attitude, there has been no smear from the students, no arrogance, just the truth of his despicable behavior as an NRA sell out.

Students at the March for Our lives made even clearer to the world who Rubio really is by wearing a “price tag” of $1.05, the amount they say each student is worth to the Florida senator.

"This here is a dollar and five cents," said in her speech at the rally Marjory Stoneman Douglas survivor Sarah Chadwick, holding up the sticker. "When you take 3,140,167 — the number of students enrolled in Florida schools — and divide by $3,303,355 — the amount of money Marco Rubio has received from the National Rifle Association, it comes out to a dollar and five cents. Is that all we're worth to these politicians? A dollar and five cents? Was $17.85 all it cost you that day, Mr. Rubio? Well I say, one life is worth more than all the guns in America."

It certainly is, and it is a terrible indictment of Rubio and the nation’s political system that our own kids have had to take charge and remind a cruel and greedy president and Congress of this most fundamental of rights.

“Fight for your lives, before it’s someone else’s job.” With these words Parkland survivor Emma González, her head shaved and the Cuban flag of her roots on her right shoulder, and invested with the power of her authenticity in stark contrast with Rubio’s opportunistic shifting and hypocrisy, ended her unforgettable speech at the March for Our Lives.

But that was not all. González came back to the stage to urge people to register to vote as volunteers signed up thousands of young new voters at the 800 marches across the nation eight months away from midterm elections. The young people’s message is clear and unambiguous.

“If there is no assault weapons ban passed, then we will vote them out,” Delaney Tarr, another Parkland survivor, told marchers in Washington.

No wonder all the shameless NRA accomplices are sweating and squirming of fear.