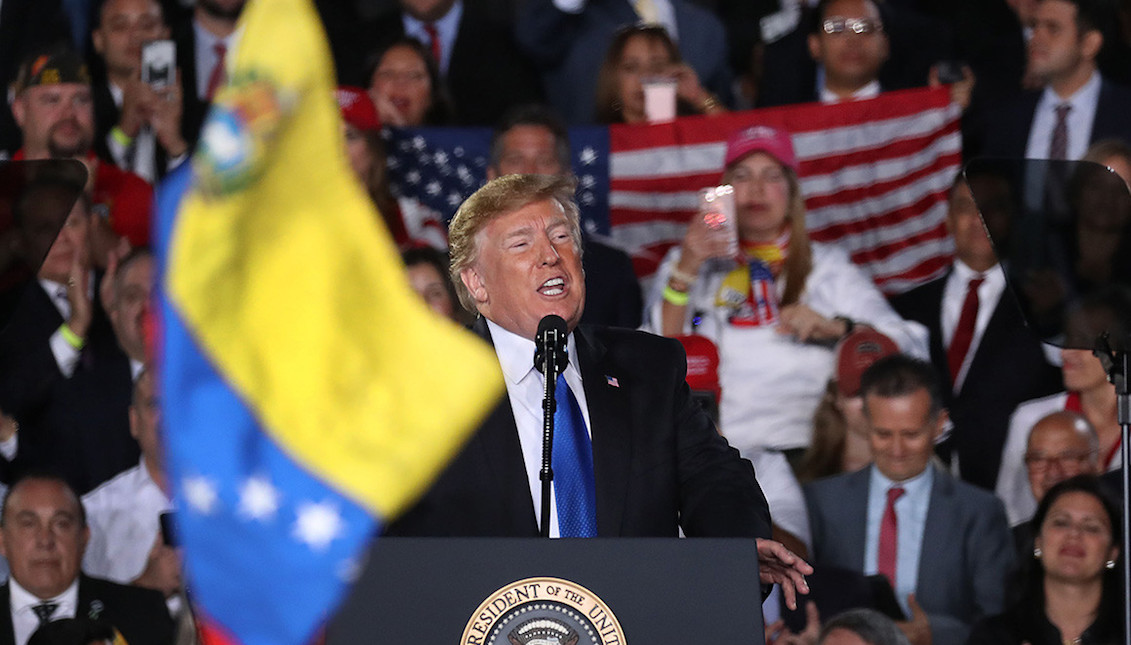 President Donald Trump gives a speech in Florida on his government's options against the Nicolas Maduro regime in Venezuela. Joe Raedle/Getty Images

I’m sure you would agree that we are not inhabiting a nice world right now. Actually, it is as cruel, dangerous and unfair as a Mad Max movie. Except that this one is, of course, real and its consequences are devastating.

The conjunction of the horrible Coronavirus pandemic, with Donald Trump, an ignorant, greedy, immoral and powerful individual who happens to be president of the United States, makes life difficult, miserable and uncertain for, yes, the whole world.

With almost unbelievable cruelty, in the midst of a global pandemic of unpredictable reach and consequences, the Trump administration has increased pressure on the Venezuelan government and its president, Nicolás Maduro. Promising to “smash” it during a “maximum pressure March,” Trump has imposed crushing sanctions that force Venezuela to spend three times as much to fight the epidemic as non-sanctioned countries. While hypocritically proclaiming he wants to help the Venezuelan people, in reality, he is adopting measures that punish them, even increasing their chances of dying from the virus.

The GrayZone editor, Max Blumenthal tweeted: “The US regime has put a mafia-style bounty on the head of the elected leader of Venezuela and set the stage for a Panama-style intervention. It seeks to install Juan Guaidó, an unelected marionette who has worked hand in glove with the Los Rastrojos narco gang in Colombia.”

But such cruelty is not enough for Trump and his accomplices. The Trump administration is also asking the countries that are benefitting from the generosity of Cuba, Italy included, and its doctors to fight the Coronavirus, to reject such help. Not that Trump is offering to send U.S. doctors to take their place, or is offering to provide interferon alfa-2b, as Cuba does, a medication that has proved to be effective when used to treat more than 1,500 coronavirus patients.

The person who occupies the White House is just demanding those nations to let its citizens die without help because of his lack of human solidarity and his insane hatred of Cuba, Venezuela, Latin American and Latinos in general.

This is the world we live in today, a world that makes me remember the words of Cuban poet Robert Fernández Retamar: “Buena suerte viviendo” (Good luck living)