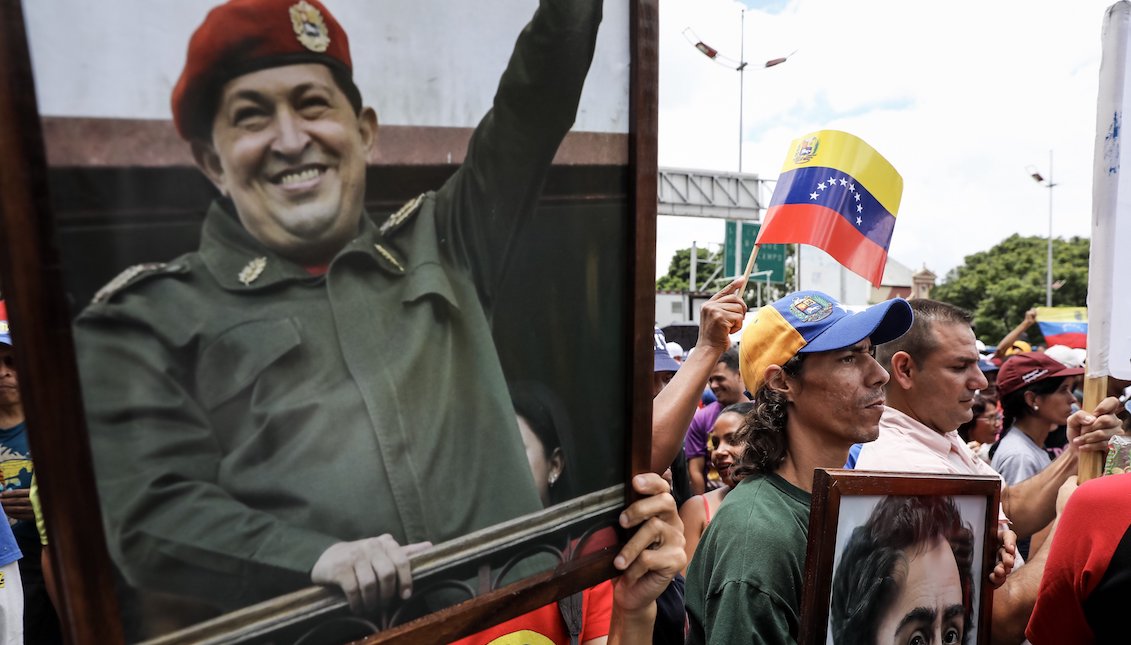 Chavistas participate in a demonstration with a picture of the late President Hugo Chávez (1999-2013) and El Libertador, Simón Bolívar, to support the installation of the National Constituent Assembly on Friday, August 4, 2017, in Caracas, Venezuela.

With the ceremony of installation of the Constituent Assembly in Venezuela this Friday, the unconstitutionality and arrogance of the Chavez regime condemn the…

After months of fighting in the streets, an unsustainable humanitarian crisis and inflation with no sign of lowering, the government of Nicolás Maduro insisted on holding elections for a Constituent Assembly, whose results were manipulated by the government, as the digital company that conducted the count stated.

The National Electoral Council condemned the accusations of the company Smartmatic as "irresponsible" and has continued with the swearing-in ceremony of the board of an Assembly that will amend the 1999 constitution.

Given the unconstitutionality of the government’s Assembly and the electoral fraud demonstrated by Smartmatic and independent observers, around 40 countries worldwide have declared that they do not recognize the Constituent Assembly or its product, urging the government to dialogue and establish an election schedule immediately, in the face of the consecration of a dictatorship.

But the regime of Nicolás Maduro has turned a deaf ear to the international community, despite the economic sanctions issued by the United States against more than 13 state officials, including the president himself, and the request of several Latin American presidents to suspend Venezuela of the Common Market of the South (Mercosur).

The goal is one: to cling to power to the last consequences.

To do this, the Venezuelan government - fearing the possible sanctions of the United States to the national oil company, PDVSA - has agreed new economic pacts with Russia, through the state company Rosneft, which has advanced payments for more than one billion dollars.

According to the BBC, "in its latest quarterly financial report published Friday, the Russian company included an advance payment of $ 1,015 million made in April to its similar Venezuelan PDVSA."

This type of transaction is not new, as there have been agreements between the two governments to purchase crude oil in recent years. Only during 2016, PDVSA received payments up to 1,485 million dollars.

Currently, there are few countries that openly support the Venezuelan government, including Bolivia, El Salvador and Nicaragua, in Latin America.

The case of China and Russia has been even more punctual, as both nations maintain fundamental economic ties with the Venezuelan oil company, so that none of the governments has discredited the Constituent Process of Maduro.

On Friday, the Venezuelan opposition has called again to the streets to demonstrate against the fraudulent government process, and have decided to march to the hemicycle, a building from where now on both the National Assembly (opposition majority) and the Constituent Assembly of Maduro will try to demonstrate its legitimacy.