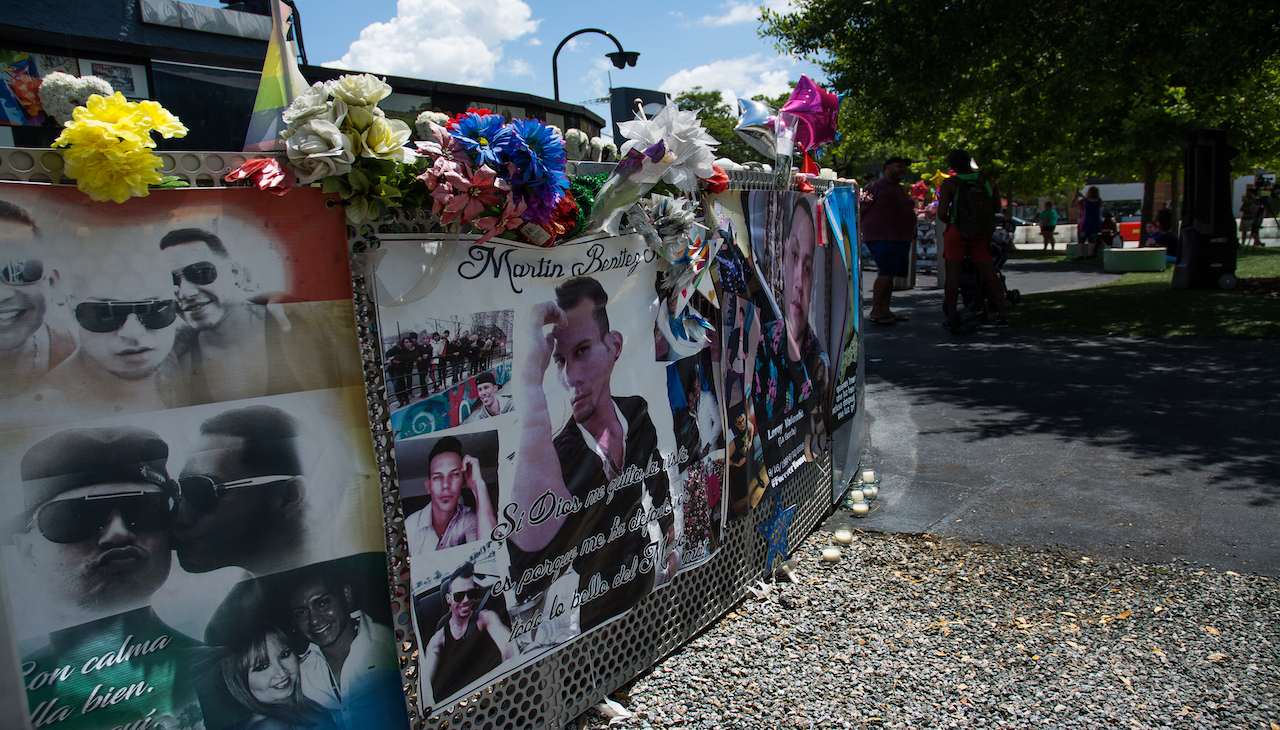 Amid Pride month, a murder and solemn anniversary show how far there’s still to go for LGBTQ+ rights

That’s not even to mention all the anti-LGBTQ+ bills that have passed in states across the country this year.

On a humid night in June 1969, police raided the Stonewall Inn, a LGBTQ+ bar in NYC’s Greenwich Village that served as a safe haven for the community.

At the time, engaging in homosexuality was illegal in 49 states, and bars and restaurants could be shut down for employing gay people or serving gay patrons.

Police raids at gay bars were common, but on that particular night, the LGBTQ+ community, led mainly by Black, transgender women, decided to rise up and fight back.

This rebellion, now referred to as the Stonewall Riots, sparked a new era of resistance, organizing and revolution that we now know as the modern day LGBTQ+ rights movement.

To commemorate the Stonewall Riots, which essentially created the concept and celebration of LGBTQ+ pride, the month of June is dedicated to recognizing the impact that this community has made in the world.

But this year’s Pride month feels different for many community members, and not in a good way. Lawmakers across the country have been aggressively advancing anti-LGBTQ legislation for months now, particularly targeting transgender youth.

Many advocates on social media have predicted that this rise in state-sanctioned transphobia would directly lead to an increase in homophobic violence, and they were right.

On Wednesday, May 20, 25-year-old Julio Ramirez went out with his friend Carlos Camacho to a gay bar in Hell’s Kitchen, and was pronounced dead at 4:49 the next morning.

More than a month after Julio Ramirez’s mysterious death, loved ones are left with more questions than answers. https://t.co/Zd8yjN9yxk

The evening was filled with different stops throughout the popular Manhattan neighborhood, known for its lively nightlife and high concentration of LGBTQ+ bars and restaurants. Ramirez and Camacho ended their night at the Ritz Bar and Lounge, located in the heart of the neighborhood’s Restaurant Row.

Surveillance footage obtained from a nearby security camera shows Ramirez leaving the venue with three unidentified men at 3:17 a.m. The four of them entered a taxi, but Ramirez was alone in the backseat at 4:10 a.m when the taxi driver approached a police officer to report that his passenger was unresponsive.

The Emergency Medical Services team did their best to revive him, but their efforts were unsuccessful. The initial cause of death was listed as a “possible drug overdose,” but the medical examiner told NBC News that Ramirez’ official cause and manner of death are “pending further study.”

Ramirez was initially identified as ‘John Doe’ because neither his wallet nor phone were with him at his time of death. More than a month later, his family and friends are left with more questions than answers about the details surrounding his death.

There are so many unknowns. Why did Ramirez not have his phone or ID with him? Who are these men that he entered the taxi with? Was Ramirez drugged or assaulted?

The eerie nature of the case goes further. In the days following his death, Ramirez’ bank accounts were completely drained, and it is unclear who is responsible.

Carlos Ramirez, Julio’s 32-year-old brother, told Pink News that he logged into his brother’s laptop three days after he died, and was surprised to see that the Apple iCloud password had been changed. He was able to access Julio’s emails and noticed a series of strange money transfers.

Carlos said that his younger brother’s bank accounts were emptied between the day he died and April 25, through purchases on apps like Zelle and Apple Pay. Additionally, about $20,000 was taken from Julio’s accounts, and his phone and wallet are still missing.

“They had literally taken every dollar that he had, all his savings and all of his money,” Carlos said.

Karinina Quimpo, a friend of Ramirez, told NBC New York that she finds the entire situation very suspicious, and hopes that answers will come soon.

“To get into a cab with a bunch of strangers, to just give away his phone, potentially give away his belongings, it’s just not like him,” Quimpo said.

On Wednesday, June 8, community members held a vigil and march in honor of Ramirez. The event drew about 60 people who marched in the street toward Times Square. Participants wanted to raise awareness of this mysterious death and push investigators to prioritize his case.

The vigil was put together by Catie Savage, a Hell’s Kitchen resident who is frustrated with the lack of information the public currently has about Ramirez’ death.

“There are still people out there who did this, who knows if they’ve done this to someone else. Until they’re brought to justice, this can easily happen again,” Savage said.

Chris Lebron, a community activist who also lives in Hell’s Kitchen, told NBC News that the lack of updated information from the NYPD is concerning, and he said it's frustrating how long it took for the public to hear about this case.

There was a vigil tonight for Julio Ramirez. Julio was found dead an hour after he left a Hell’s Kitchen Bar. He was last seen leaving with three men. They drugged him and drained His bank account. #justiceforjulio pic.twitter.com/lSLkXSe2Ws

Ramirez’s friends say that he was kind and intelligent, and believed wholeheartedly in serving communities that are underfunded and underrepresented.

Hailing from Long Island, Ramirez recently moved to NYC to get his bachelor’s degree and two master’s degrees from the University of Buffalo. He had been living in Bushwick, working as a bilingual mental health counselor.

Like many gay men in the city, he frequently visited Hell’s Kitchen, along with its neighbor, Chelsea, which has the highest concentration of LGBTQ+ bars and resources in the city.

As the LGBTQ+ community in NYC mourns the loss of a gay Latino man with a bright future, the rest of the country is solemnly remembering the 49 LGBTQ+ people lost in the Pulse nightclub shooting.

Not only was this mass shooting an attack on the LGBTQ+ community, it was an attack on Latino people. During a 2016 press conference, Zoe Colon of the Hispanic Federation informed the crowd that about 90% of the victims were Hispanic, mostly of Puerto Rican background.

Today marks the six-year anniversary of the Pulse nightclub shooting. This was the biggest attack on the LGBTQ community - an act of hatred and bigotry. Today, we honor those who were taken from us. We must keep fighting for common sense gun reform. Let's honor them with action. pic.twitter.com/heoip1Vrf1

Around 2 a.m on June 12, 2016, a gunman parked a rental van next door to the club, walked past a uniformed police officer working as a security guard, entered the building and began shooting.

The onslaught continued for hours, and by the time the perpetrator was killed after 5 a.m, he had killed 49 people and injured another 58. At the time, it was the worst mass shooting in U.S. history, and it remains the deadliest attack on LGBTQ+ people in the U.S.

Six years later, friends and families of the victims, the survivors as well as LGBTQ+ people across the nation are still grappling with the trauma.

Jeff Xavier, who spent that night out with friends and decided to get one last drink at Pulse, told PEOPLE that this decision almost cost him his life.

Xavier said he was shot multiple times and bled out on the floor. He actually died and was resuscitated. In the years following, he has undergone several surgeries. Xavier lost six friends that night.

"It's been 6 years, and I am still having nightmares about what I saw that night," he said.

Even in 2022, 53 years after the Stonewall Riots, the LGBTQ+ community is still actively facing oppression and violence. And for people of color within this community, especially Black and Latino people, the dangers are heightened.

However, this resilient community will continue pushing back until they reach the ultimate goal of peace, justice, freedom and liberation.

TAGS
hanosoy179
I get over $25k a month working part time. I kept hearing other people tell me how much money they can make online so I decided to look into it. Well, it was all true and has totally changed my life...This is what I do, check it out by Visiting Following Link open here → 𝗪𝘄𝘄.𝗦𝗺𝗮𝗿𝘁𝗝𝗼𝗯𝟭.𝗰𝗼𝗺
woson82288
I make 85 dollars each hour for working an online job at home. dso I never thought I can do it but my best friend makes 10000 bucks every month working this job and she recommended me to learn more about it.
The potential with this is endless copy the link...—————-> 𝗪𝘄𝘄.𝐄𝐚𝐬𝐲𝐰𝐨𝐫𝐤𝟐.𝐂𝐎𝐌
rzstpddemcgtrjw
I easily make $32,000-$38,000 each month just by doing a simple home business. This job is online and can be done very easily part-time or full-time, although no specific experience is required for this job. Anyone can join this work now and start earning like me.
.
Follow the link. >>>> 𝗪𝘄𝘄.𝗕𝗶𝘇𝗣𝗮𝘆𝟭.𝗰𝗼𝗺
jihiga3700
=❤️= [ JOIN US ]
I get paid more than 💰$100 to 💰$700 per HOUR for working online. I heard about this job 3 months ago and after joining this I have earned easily 💰$35000 from this without having online working skills .. Simply give it a shot on the accompanying site…