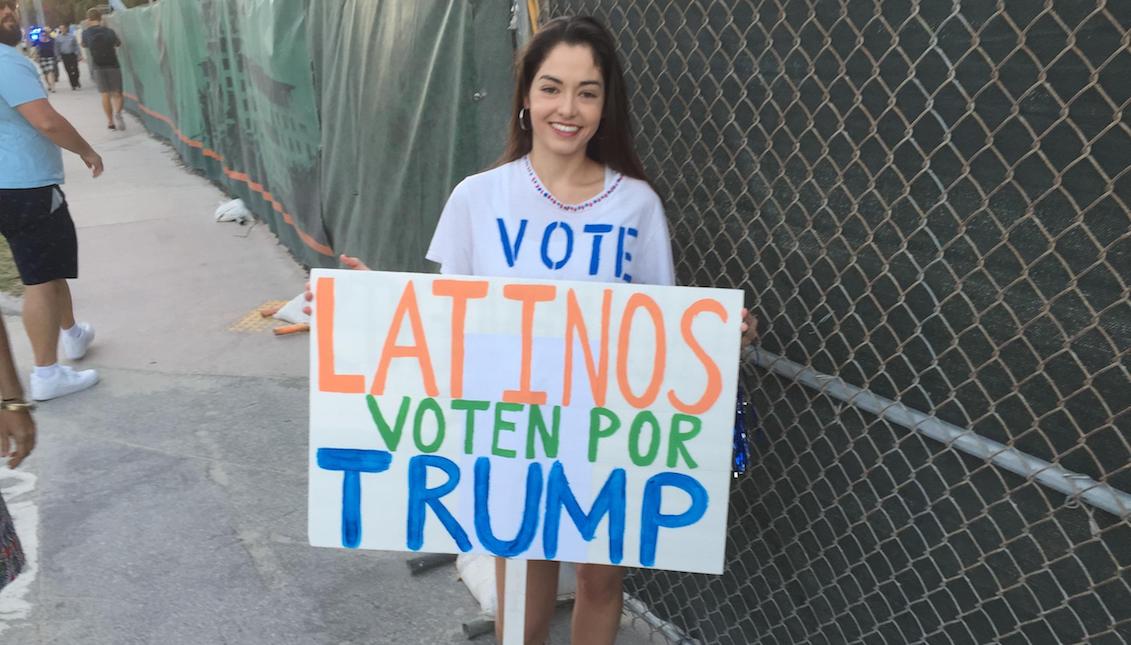 Photo showing a Cuban-American supporter of Donald Trump during the month of March 2016 in Coral Gables. Credit: Tim Padgett/WLRN.org

Latinos for the wall: breaking the myth of the immigrant

Recent polls have determined that the support of the Latino community to President Trump is around 34 percent nationwide, including many that favor the project…

The most pronounced tendency in politics is the radicalization of discourses.

In the Trump Era, this divisionism has been accentuated by those who consider him a right-wing radical versus those who read between the lines of his proposals.

The same case applies to the immigrant community, specifically Hispanics, in the United States.

Even though Donald Trump's presidential campaign focused on the stigmatization of immigrants from the southern border, a large portion of Latinos who identify as Republicans have maintained their political stance, exhibiting little change in party support.

The range of characteristics in the community is so diverse that it accommodates both traditionalist religious and liberal progressives, breaking the myth of the "monolithic" community that many claim to perpetuate.

When at the beginning of the year the president boasted of the increase in Latino support for his administration, his claim was not completely outlandish.

The data analyst and political columnist for the Washington Post, David Byler, explains the phenomenon of "Latinos by Trump" arguing a pre-existing base in the Republican party composed mainly of Hispanics whose interests are far from mere immigration.

"Hispanic and Latino voters aren’t one identity homogeneous group," explains Byler. "As with every other large racial and ethnic category (white, black, Asian), there’s a lot of internal diversity when you look under the hood."

The columnist explains that this heterogeneity is influenced especially by a large number of Latino countries that exist, and how the origin and the context cause profoundly different communities, as happens with Asian Americans.

Similarly, the new generations - second or third generation - tend more to identify themselves as Americans than as Latinos, which also breaks with the prejudice of the Latino Democrat in the Trump era.

It’s precisely these Hispanics who consider that public health; national security and/or access to education are issues that precede immigration when it comes to voting.

The incomprehension of this phenomenon is what allowed journalist Miguel Márquez to be stunned when Rolando Rodriguez, who resides a mile from the border, told CNN he wanted, "a wall of 2,600 miles that is longer and higher.”

"I don’t think the wall is going to be a barrier, really, for good people," Rodriguez added. "It will be a barrier for the bad people."

This argument has been used by other Latinos even to make politics.

During the mid-term elections, Fred Rangel competed for the position of representative in District 125 of the House in Texas for the Republican Party and had the massive support of the Latinos for Trump coalition.

Rangel used the border wall as one of his campaign weapons, as well as the radical opposition to abortion and religious comments.

Despite the efforts of Latinos for Trump, Democrat Ray Lopez defeated Rangel with 54 percent of the vote.

However, it’s precisely this range of Hispanic support that could radically change the landscape of the elections in 2020 in favor of Trump.

The Administration's campaign to exert pressure against "socialism" in Venezuela has garnered great support in states like Florida, with a Republican majority, and the sustained trend of support for the government could imply a second term for Trump.

The warning for Democrats is simply to stop campaigning on immigration and take Latinos and Hispanics as voters with the same needs as everyone else.