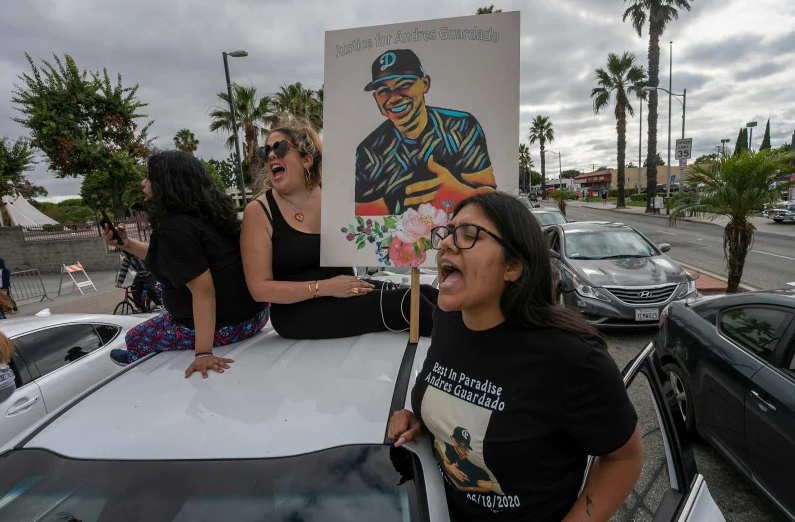 It’s time to talk about police violence against Latinos

But it must be done in solidarity with African-American communities. UnidosUS and Voto Latino have partnered with Black Lives Matter to start the discussion.

The recent deaths of George Floyd, Breonna Taylor and Daunte Wright have made it impossible to ignore the crisis of police brutality that has flourished on U.S. soil for several decades.

The Black Lives Matter movement, co-founded by Alicia Garza, Opal Tometi and Patrisse Cullors, began in 2013, but it gained major fuel among all races in a monumental way throughout the Summer of 2020.

The Hispanic community proudly stood alongside any injustices committed against fellow marginalized ethnic groups, but lately, they are feeling a lack of reciprocated support.

Odis Johnson, lead researcher and associate professor of education and sociology at Washington University, explained that according to data they’ve collected, the racial and economic demographics of the neighborhood a person resides in is a powerful factor in their odds of being killed in a police interaction.

“The bottom line from this latest analysis  is that the demographics of the neighborhood where you live, work and walk the streets can make a big difference in the odds that a young Black or Hispanic male will have a fatal interaction with law enforcement,” Johnson said.

Since 2015, Latinx people have been the second-highest demographic killed by police, after Black Americans, research by the Washington Post shows.

"It has been a real problem for the Latino community throughout the country," says Rep. Joaquin Castro. https://t.co/sK9dRmlnE1

Both are disproportionate rates considering their percentages of the population.

While both Black and Latino Americans face similar degrees of racial profiling, mass incarceration, as well as disparities within education, healthcare and the workforce, the conversation around police brutality and systemic racism tends to leave out Latino Americans.

Currently, about 50% of federal drug cases are against Latinx people, even though they make up only about 17% of the U.S. population. And in New York, Latinx people are arrested for marijuana possession at about four times the rate of white people.

The country just witnessed the tragic and senseless murder of 13-year-old Adam Toledo in Chicago, but the murders of Hispanic boys and men at the hands of police are all too common.

On June 18, 2020, 18-year-old Andrés Guardado, a Salvadoran American was shot and killed by a Los Angeles sheriff’s deputy. But Guardado wasn’t the only young Latino executed by police that month.

Earlier, on June 2, 22-year-old Sean Monterrosa was killed by a detective who shot him five times through the windshield of an unmarked police vehicle.

Police alleged that Salgado was “ramming: the car he was driving into their vehicles, but his family’s lawyer said that he was shot multiple times first. Salgado died; his girlfriend survived, but lost their baby.

Ok then charge the cops who murdered Sean Monterrosa, Erik Salgado, Andres Guardado and all those who has been murdered by police in California. https://t.co/blx5vXNudx

As Black Americans remain the most targeted victims of police brutality, it’s crucial that they are centered in the conversation, but it’s also essential to shed light on the plight of Latino Americans and their grief, trauma and specific barriers to racial equity.

In response to this void in dialogue about police brutality faced by Latinx people, UnidosUS, formerly known as The National Council of La Raza, has partnered with Voto Latino and Black Lives Matter to bring more awareness to these attacks against Hispanic communities.

The ongoing, tragic police killings of Black and Latino men and women, including Adam Toledo, Daunte Wright, and Ma’Khia Bryant, means that passing the George Floyd Justice in Policing Act is more urgent than ever. pic.twitter.com/91uWKfYVfv

Many Hispanic-related issues are misinterpreted. Immigration seems to be the issue most associated with the communities, and Rodriguez does acknowledge this.

“Sixteen percent of Hispanics are facing immigration related issues, but what about the rest of the population?” Rodriguez said. “As if the other 84% of the population isn’t impacted by the issue [police brutality.] They are,” he continued.

In a press release from Tuesday, April 20, Janet Murguía, president and CEO of UnidosUS, released a statement responding to the verdict in the recent Derek Chauvin trial, and announcing the organization’s collaboration with their “brothers and sisters in the Black community and other communities of color.”

“The murder of Mr. Floyd —and most recently, the tragic deaths of Daunte Wright and Adam Toledo at the hands of police — shows how far this country has to go to rid itself of the structural racism and bigotry that exist in this country, especially in law enforcement,” Murguía said.

Angelica Erazo, VP of the Hispanic Quality of Life Commission in Austin, Texas, spoke out after the death of Mike Ramos in 2020, an unarmed Hispanic man killed by police in response to a 911 call.

She called upon the Hispanic community to stand up and speak out, but to walk in unity with the Black community and take over some of the heavy lifting.

“All too often, we do not show up when it comes to police violence and your voice is powerful and needed, too,” said Congressman Jesús García.

My heart goes out to George Floyd’s family and a nation in mourning.

It took a 9 minute & 29 second video of a man being murdered,

And 1 year of millions taking to the streets,

This is NOT justice for George Floyd, his family or our country!

“Now is the time to stand in solidarity with [your] Black sisters and brothers and realize that their struggle is our struggle. Our stories are intertwined, and it is up to us to write our future legacy,” he said.