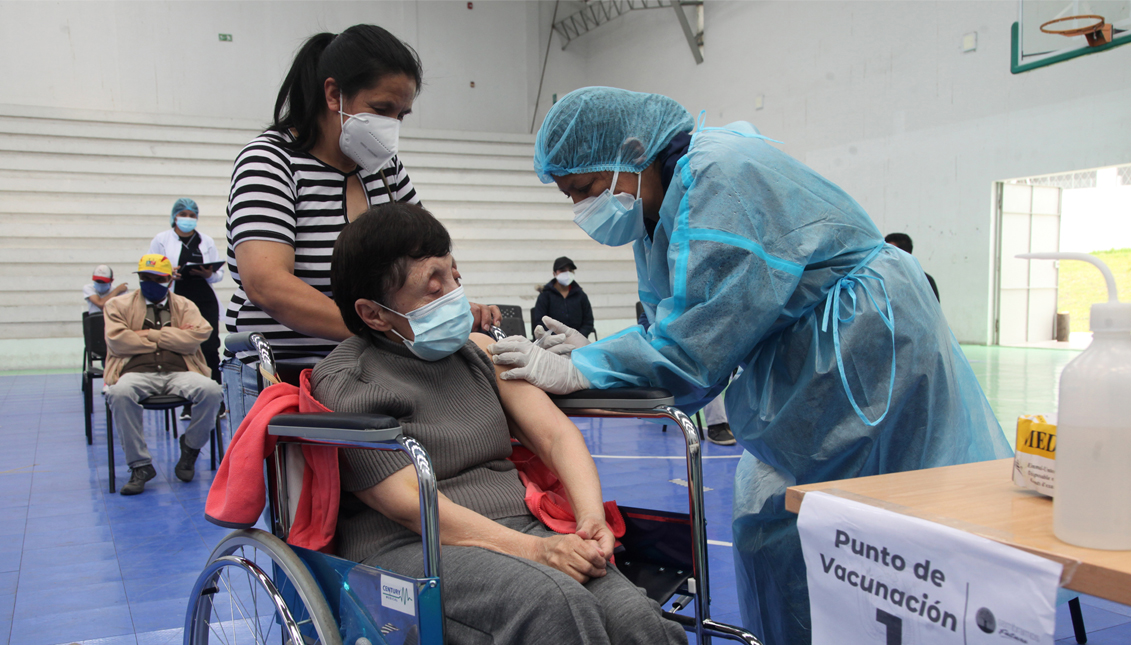 CUENCA, ECUADOR - APRIL 26: A health worker administers a dose of the Sinovac vaccine to a person with disability as part of the vaccination campaign against COVID-19 at Coliseo de la Unidad Educativa Garaicoa on April 26, 2021 in Cuenca, Ecuador. (Photo…

Latin America will produce COVID-19 vaccines, but none from the U.S.

The worst of the COVID-19 pandemic seems to be in the rearview for people in the U.S., but the inequity in vaccine production and distribution will keep Latin America in a dire state into 2022.

Similar to the U.S. experiencing massive protests for racial justice and having to conduct a presidential election during the height of its outbreak, Latin America has witnessed its own civil unrest and heated election campaigns during the same time frame.

Bolivia and Ecuador had drama-filled presidential races that would determine if both would be governed by the hand-picked successors of their former “pink tide” leaders.

Residents of Colombia have also been engaged in violent protests over a tax reform proposed by president Iván Duque. The pandemic has seen the country’s poverty rate increase to over 40%.

Salvadorans also took to the streets over authoritarian actions taken by President Nayib Bukele. Recently, his New Ideas Party, the ruling party in parliament, voted to fire the five judges on the country’s Supreme Court and their alternatives.

Having to balance multiple other matters while the pandemic ravages through a nation are the only aspects where the Latin American region and the U.S. can relate.

Although America does not have a universal health care system or as generous social safety nets like countries in Scandinavia and Westerrn Europe, it is still able to provide more assistance to its people than any country to its south.

The American Rescue Plan, which went into effect in March, was an economic stimulus worth $1.9 trillion. The World Bank estimates that the gross domestic product of Brazil, the richest country in Latin America, totaled $1.8 trillion in 2019, the year before the pandemic negatively impacted world economies.

As a result of these countries already having high rates of poverty and large segments of the population working in the informal economy, Latin American nations could not properly enforce lockdowns and quarantine measures.

The region also lacks economies that are as diverse or sustainable without immigrants in the U.S. sending money back home.

In the Dominican Republic and Uruguay, over 15% of their residents worked in the travel and tourism industry. In a time when travel was highly restricted and still very limited, this took a toll of their workforce.

Remittances make up about a fifth of the GDP for countries in the Northern Triangle. Central Americans losing work in the U.S. during the outbreaks could result in them not being able to support their families during even harder times.

Vaccines were supposed to spell the beginning of the end of suffering for millions of Latin Americans, but many operations have not gone to plan.

Last summer it was announced that Mexico and Argentina would be between 150 and 250 million doses of the Oxford/AstraZeneca COVID-19 vaccine.

Argentina would produce the vaccine and send them to Mexico for them to be bottled. These doses would be distributed to all of Latin America except for Brazil, who made accords with other countries.

The project financed by Mexican billionaire Carlos Slim has not released a single dose in the 10 months after it was announced.

BBC Mundo reported that the delay is a result of a scarcity of materials needed to package the doses. Mexico’s Deputy Secretary of Prevention and Health Promotion has commented on the setback.

"For a while, there was a small delay of approximately 10 to 12 days that had to do with a worldwide shortage of some filters, of a very specific component of the manufacturing process. This was solved several weeks ago, more than a month and a half ago, and now we are in the packaging process," he said on April 22.

On Monday, May 10 it was announced that Argentina sent 5.7 million AstraZeneca vaccines to Mexico and that the bottling process would begin soon.

Mexican president Andrés Manuel López Obrador received his first dose of the AstraZeneca vaccine in April, during one his morning press conference in an attempt to promote immunization.

His Argentine counterpart, Alberto Fernandez, got his second dose of the Russian Sputnik V vaccine in February, but still tested positive for coronavirus on April 3. Studies showed that people who receive this vaccine can still contract the virus, although it is very rare.

President Joe Biden took his second dose of the Pfizer vaccine on Jan. 11, before he was officially sworn in.

The U.S. getting more than a couple months  head start means that Latin American countries will be playing catch up for a while.

Americans can talk about fully reopening the economy in the summer because three of its companies, Pfizer, Modern and Johnson & Johnson, have developed vaccines, and over 34% of the U.S. population is fully vaccinated.

Meanwhile, Guatemala, Paraguay and Ecuador each have less than 2% of its people fully vaccinated.

Countries in the region are having to negotiate on the market to receive the scraps from foreign laboratories.

The only large vaccine deal the U.S. has done was with Mexico in March. They aim to send 2.5 million vaccines to their Southern neighbor.

Aside from this, the American government has been absent from the distribution process in Latin America and has allowed Russia to pounce on an opportunity.

The geopolitical adversary of the U.S. has not only committed to giving multiple countries in the region millions of vaccines, but they will allow some to produce their vaccine.

Russia will allow Argentina to produce Sputnik V, and they will do so at a rate of one million doses per month for one year. However, the goal will be to work up to producing five million per month.

Bolivia’s Deputy Minister of Foreign Trade, Benjamin Blanco, confirmed last week that there were also promising talks between both countries.

“We are working with the Russian Investment Fund, seeing what possibilities there are for a Bolivian public or private company to start manufacturing these immunizers,” the official said.

Some might fear that Russia is trying to increase its influence in the region, but only time will tell if this is simply an outdated Cold War manner to approach the issue.

China has also not hidden their intentions to expand into the Latin American economy in recent years with their Belt and Road Initiative. The rising power has invested billions into the region through large-scale infrastructure projects.

These investments are not free of petitions from the Chinese government and one of them is for a country to cease recognition of Taiwan.

Countries in Latin America who choose to hold diplomatic relations with Taiwan, like Guatemala, Honduras, Nicaragua, and Paraguay, will not receive China’s Sinopharm COVID-19 vaccine.

Taiwan feared that its allies in the region would abandon them for vaccines, but they all held out so far.

The Chinese vaccine was only given emergency approval by the World Health Organization on Friday, May 7.

To many, the pandemic should have brought people together, but geopolitical interests are still at play during this public health crisis.