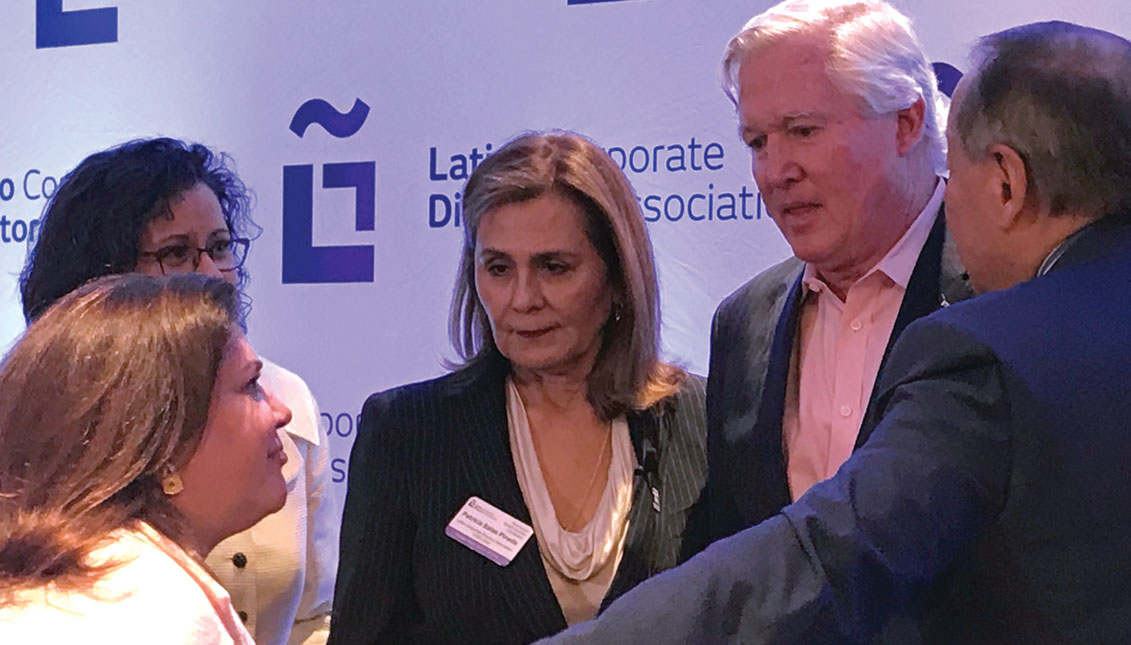 Kim Casiano, Board member of Ford Company (left) being introduced by Nelson Diaz (right), PECO Board member, to the President and CEO of EXELON, Christopher Crane. Photo: AL DÍA News

Latino participation on corporate boards remains low. How can that be changed?

Victor Arias, managing director of RSR Partners, led his consulting firm in producing a report entitled: “Latino Board Representation: Improvement or Not?”

While Latinos only represent 2.4 percent of all corporate board members on Fortune 1000 companies in 2017, that number increased from 1.6 percent in 2011, his study found.

Arias said Latino corporate board membership trails significantly behind the segment’s effect on the US economy.

Latinos in the US contributed $2.1 trillion in gross domestic product (GDP) to the economy; that number would make them the seventh biggest economy in the world, larger than the Mexican economy.

“I think Latinos will continue to make up ground,” Arias said of corporate board membership.

Arias made the remarks at the 3rd Annual Latino Corporate Directors Association (LCDA) Board Leaders Convening, held in Chicago, Oct.18-19, to which AL DÍA was also invited.

Oscar Munoz, the Chief Executive Officer at United Airlines, also spoke at the conference. He is one of the few Latinos in the chief role at a major company.

“It has to get away from, ‘I’m the exception, you’re the exception,’ to acceptance of corporate America,” Munoz said. “It’s not about color or race, it’s about insight of body.”

Munoz has had an eventful term, since taking over in 2015.

He suffered a heart attack in Oct. 2015, months after starting; he recovered, returning to work in March 2016, hammering out several union contracts.

But in early 2017 he faced a public relations disaster when a passenger was forcibly removed from an overbooked plane. Munoz was criticized for showing a lack of compassion in his statement.

In May 2017, he was rated as one of Forbes most hated CEO’s, but after profits and the stock price shot up, he was called the comeback kid, with Seeking Alpha even titling an article, “United Airlines: In Oscar Munoz We Trust” in April 2018.

According to its website, the LCDA was created in 2012 “to promote a culture of inclusion for Hispanics is America.

“By collaborating with U.S. companies, we can create new opportunities and make corporate boards more representative of today’s America.”

Esther Aguilera is the President and CEO of LCDA, and, in remarks at the Convening, she said LCDA is accomplishing this goal by focusing on four pillars:

LCDA will grow the supply of Latinos in the board room through an initiative launched last year: The Board Ready Institute, a two-year program to identify Latinos for board service.

According to a Jan. 2018 LCDA press release, BRI “is an exclusive, invitation-only engagement for US Latino C-suite executives and top leaders interested in serving on corporate boards. The BRI will prepare, network, and position high-caliber U.S. Latino talent from a variety of industries and professions for corporate board service. Participants dove into the program with the LCDA Annual Board Leaders Convening on Nov. 1-3, 2017.”

She noted later: “It’s really about the networking, the coaching, and helping them map out the journey to the boardroom.”

An Oct. 2018 article from the Financial Times entitled: “Diversity beyond gender proves hard for investors to measure” also found that institutional shareholders like private equity are interested in helping increase diversity on corporate boards.

“The shift is being propelled by the more progressive public U.S. pension plans, as well as advisers to city retirement and investment funds in New York and Chicago,” the article noted. “Big money managers, such as BlackRock and State Street, which hold hefty sway in proxy contests, have also responded to the call.”

“We went to go visit with the private equity. It turns out they’re interested in our talent,” Aguilera said at the LCDA Convening. “Some of them are launching a board director diversity initiative.”

Aguilera mentioned that LCDA is working with several prominent private equity firms on diversity initiates; firms who have partnered with LCDA include KKR, the Carlyle Group, TPG, Clear Lake, and Wind Point Partners.

Increasing demand continues to be difficult.

Chris Crane is CEO of Exelon, a Fortune 100 energy company.

When Crane spoke at the LCDA Convening, he said his search firm could not provide a qualified minority candidate when a recent board positioned opened.

That said, Aguilera said that in 2018, LCDA received  45 requests from board search companies, up from approximately five in previous years.

Growing capacity means “building up our organization to continue to keep pace with the growing needs and demands of the organization,” Aguilera said.

Jose Rodriguez, a Partner and the Executive Director of KPMG’s Audit Committee Institute also spoke at the LCDA Convening.

“We came to the conclusion that it fit really nicely with what KPMG is trying to do in terms of diversity,” Rodriguez said. “We decided to expand the relationship.”

KPMG is one of the sponsors of the BRI.

Its annual meeting is another opportunity for partnership, Aguilera also said.

Aguilera said that the annual LCDA convening was one way to raise awareness, but change “includes how we can get out there in the mainstream media, and magazines and publication and focus on boardrooms.”

In 2018, the mainstream media has taken some notice.

Besides the article in the Financial Times, a September 2018 article in Forbes was entitled, “Latest Trends in Addressing Boardroom Diversity.”

Chief Executive, a trade journal for high level executives, ran an article in June 2018 entitled: “Does Diversity in the Boardroom Matter?”

“While driving gender and ethnic diversity among directorship roles has gained traction at large, consumer-facing companies, movement has lagged across corporate America as a whole. Yet a growing body of research suggests boosting diversity in your boardroom is worth considering,” the article stated.

The mainstream media does not have a consensus diversity adding value in the board room; Bloomberg ran an article entitled More Boardroom Diversity Means Less in C-Suite, Lucara CEO Says on June 21, 2018.

The website QZ stated that diversity of age is also important- in an April 25, 2018 article entitled The type of diversity boardrooms prize most is age—and they can’t even manage that.

The average age, according to the RSR, of Latinos in the US is 29 versus 43 for non-Latinos.

The LCDA Convening was held on October 18-19 at the Monaco Hotel in Chicago.