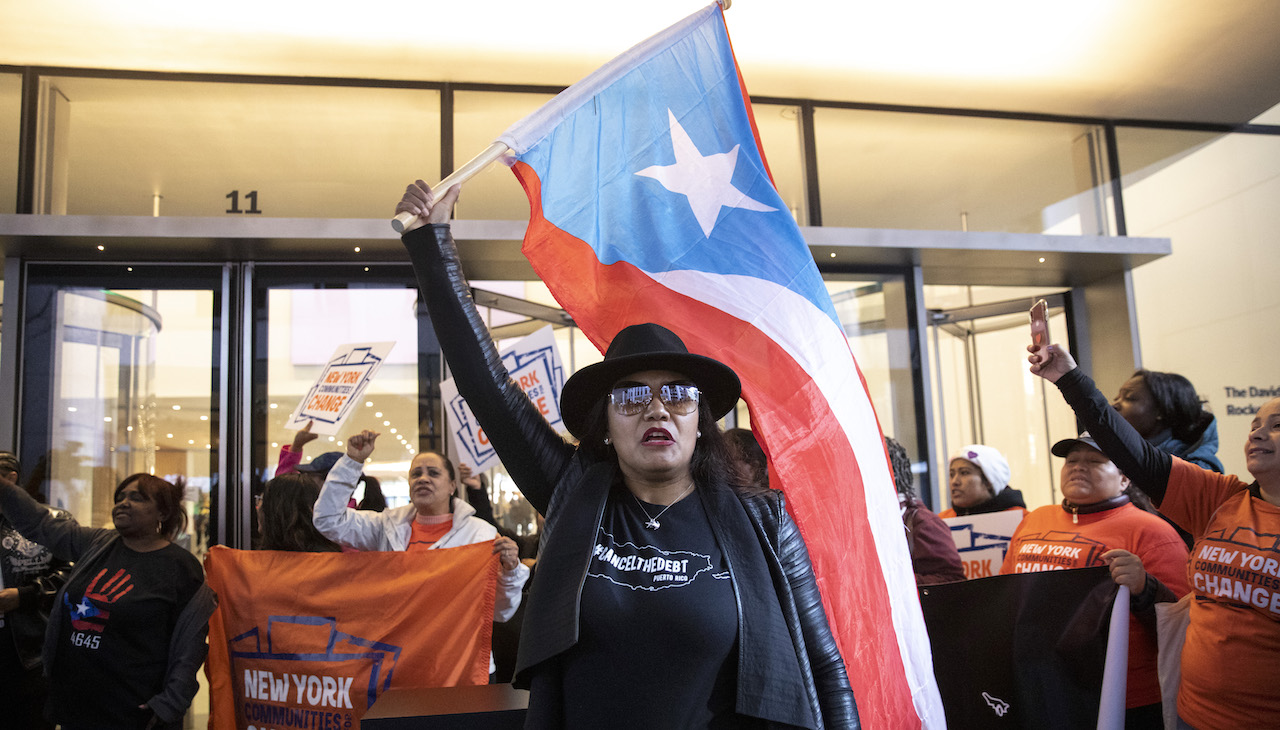 Puerto Rican activists across the US mainland are often at the forefront of the battle for Puerto Rico's legal wranglings. Photo: Drew Angerer/Getty Images.

As Puerto Rico faces deep economic austerity, U.S.-based organizations are at the forefront of a growing movement opposing the debt.

While many enjoyed a hot Summer Saturday on Aug. 6 following a heat wave across the U.S., a New York-based organization comprised of 30 or so members convened a virtual meeting to discuss Puerto Rico’s $124 billion debt, the largest in U.S. history.

PR no se vende (Puerto Rico is not for sale) is a grassroots organization part of a larger coalition that opposes federal austerity measures imposed on the island to resolve the island’s debt.

The topic of the meeting was how to file a complaint with the Securities and Exchange Commission (SEC), the federal body responsible for overseeing market stability.

Gabriela Malespin, 27, is a Puerto Rico native and one of the organization’s earliest members. She guided the call by filling out a complaint herself and answering any questions posed along the way. On a call filled with mostly black squares listening in, she discussed intricacies within the complaint process, hoping to ease an otherwise complicated process for others.

For Malespin, the movement stems from the first-hand relationship between her upbringing and Puerto Rico’s dire economic conditions.

“You know, I’ve been slowly seeing the turmoil Puerto Rico’s gone through throughout my childhood. I grew up during the recession and saw a lot of my friends having to leave (...) to Florida because there weren’t any jobs,” Malespin recalled.

Her story echoes the Puerto Rican diaspora, a narrative that describes uprooting your life and starting over, not of one's own will because you don’t see a way out.

Congress declared a crisis in 2016 when it deemed the island’s debt untenable, totaling hundreds of billions, an amount the local government said they could not pay, triggering a federal austerity response.

President Barack Obama installed Federal Oversight and Management Board to control government spending and get the debt back on track. The end goal was to design a payment plan without leaving the island financially insolvent.

PROMESA was Congress’s promise to bondholders, local government, and pensioned employees to whom the debt is payable.

In 2019, Aurelius Capital Management, the primary bondholders, brought the case before the United States Supreme Court, which, in a unanimous ruling, determined the debt was constitutional by allowing the legitimacy of the financial overseers.

And because the court did not consider them “Officers of the United States,” the president could appoint members without Senate confirmation. Puerto Rican citizens, the debt’s ultimate collateral, did not have a say in the matter.

Following years of severe oversight that has resulted in skyrocketing taxes and wage paralysis, Puerto Rico is one step closer to its first payment after a federal bankruptcy court approved FOMB’s restructuring and payment plan in 2022.

For people like Malespin, the effects of the debt are felt directly in her hometown of Bayamón, where schools like the one she attended for elementary school remain closed following the destruction of Hurricane María.

“I really can’t stand to see all the news stories about what is going on in [Puerto Rico]. Reading about all the different ways in which the vulture funds continue to prioritize their profits over Puerto Rican lives,” she said.

Through small actions like filing an SEC complaint, Malespin hopes to get enough traction on the website and trigger an investigation. While it is unclear how many complaints are needed for the SEC to conduct an ​​official inquiry, her ultimate goal is to mobilize the diaspora through several organizations in the nation.

“Part of it is to educate, and the next part is to agitate and start moving toward action,” she said.

A voice for the diaspora

“There’s a very general knowledge that people have of around Puerto Rico. They’re aware of the debt crisis. It’s just some pieces of the puzzle. A lot of it has to do in part with the way people have appropriated the discourse on [Puerto Rico] (...) instead of interrogating all the policies that have led us to where we are,” said Malespin

Puerto Rico’s crisis coverage often makes national headlines, but Congress can only do so much for a constitutional debt, resulting in worsening economic conditions for citizens on the island.

Puerto Rican lawmakers frequently express how any restructuring would ultimately leave the island insolvent, or at the very least, unlivable, given current dire conditions.

The law made it worse

As members of Capitol Hill introduce recycled legislation, the country’s most wealthy seek tax refuge on the island, where they can avoid the IRS after a few months of residence. Act 22, a legal measure passed by the Puerto Rican government, attracted investors hoping to restart the economy.

According to economic studies, these investors have amounted to a little over 2% in the years since the Act was passed.

These issues compounded an inflation-stricken island with little to no economic growth or opportunity, pricing citizens out of the island.

In the interim, U.S. legislators introduce status acts, which historically have not worked, to resolve a political question, leaving the economic outlook inconclusive.

Alongside surrounding coalitions, Malespin continues to drive awareness at the forefront of the battle against Puerto Rico’s debt.