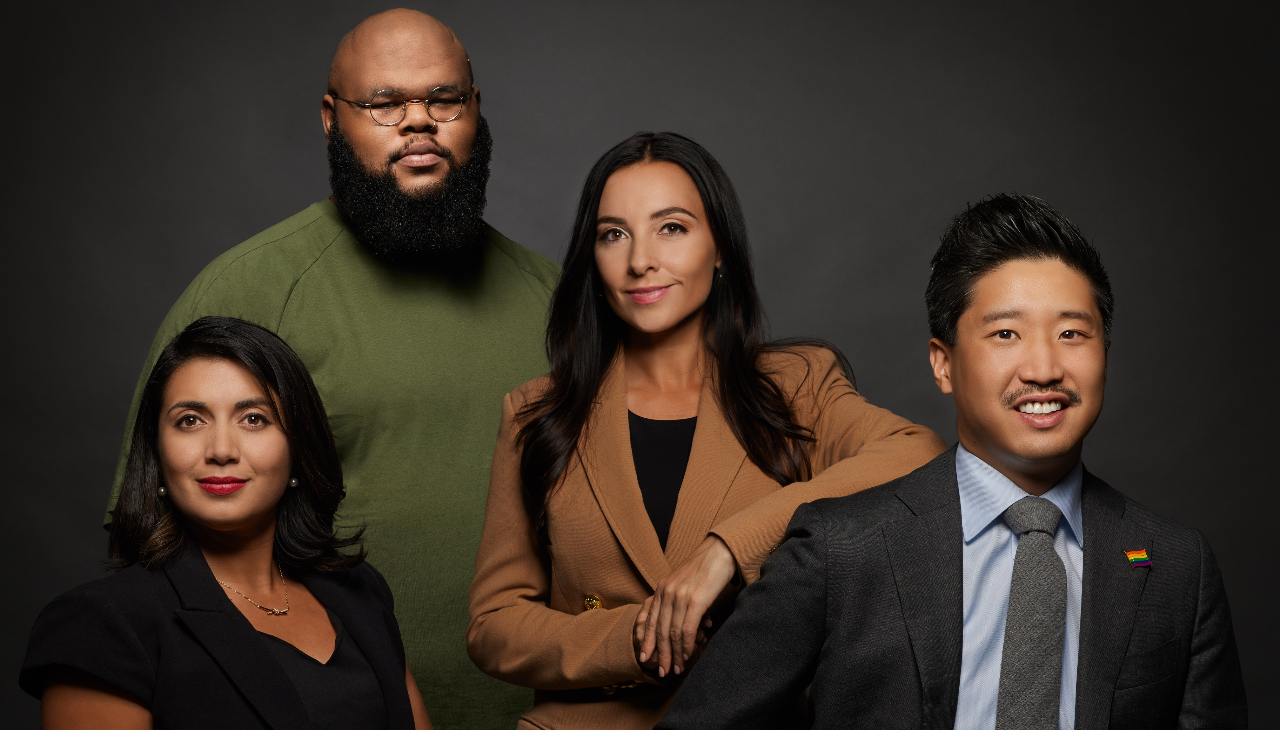 These four diverse individuals represent 10% of this year’s AL DÍA 40 Under Forty honorees; each with different experiences, but an interconnected goal.

When the AL DÍA 40 Under Forty event came to fruition amid the COVID pandemic in 2020, it was done so through determination and a positive attitude.

The city is filled with great, diverse young leaders whose work isn’t being highlighted.

Two years later, and AL DÍA has highlighted 80 individuals who have helped drive this city through prosperity, innovation and hard work.

This year, 40 more individuals will be adding their name to this growing list of honorees.

These four — Deana Gamble, Stephen Kulp, Rasheed Ajamu, and Andrea Gonzalez — offer just a glimpse of just how dedicated and impactful the young leaders of our city truly are.

A Communicator At All Levels

Deana Gamble and her twin sister were the first in their family to attend college.

When Gamble enrolled as a student at Temple University, the South Jersey native decided to study strategic and organizational communication, armed with a desire to work in the nonprofit sector.

“I felt like comms was something that you could apply to any organization,” Gamble told AL DÍA.

After pursuing the nonprofit route early in her career, she developed a passion for community development and education.

The latter passion led to her working over eight years for the City of Philadelphia. During her tenure, she played a key role in launching the city’s first adult education system, directed a range of advocacy efforts, supported the Community Schools initiative and PHLpreK program and led communication efforts for the Mayor’s Office.

“Everything from PreK to higher ed was always a passion because just believing that the path out of poverty for Philadelphia kids is through education,” said Gamble.

Since Nov. 2021, Gamble has served as Assistant Vice President of Communications at Jefferson.

As both a prominent university and health system, she saw employment at Jefferson as a way to marry two of her passions, as well as an opportunity to be more proactive in her everyday approach.

With the COVID-19 pandemic, it taught her — and many others — that health is everything.

“Anything that I can do to promote good health practices and the services that are available… I think is really important,” said Gamble.

“Finding creative ways to reach people where they are, I think, is always the mission,” she added.

Stephen Kulp has always been passionate about advocating for others, speaking out against injustices, and looking for ways to drive change.

That passion has been a direct result of his personal background.

Born in South Korea, he was adopted by his adoptive parents who brought him to South Jersey as an infant.

“I thought that the law was a good place for me to do that. And it has proven to be a great platform for me to speak and raise awareness about the issues that I’m passionate about,” Kulp told AL DÍA.

Given his status as “a minority,” he has often faced double standards, lack of equal opportunities and imposter syndrome throughout his life. However, he notes that those challenges have aided his advocacy efforts, and helped build his courage and grit.

Kulp is the Chair of the Philadelphia LGBTQ Bar Association — the first Asian American to hold the role.

“It’s an honor of a lifetime,” he said. “To be the first Asian American to lead the organization and hold this position is incredibly humbling, but it also allowed me to bring perspective and a lens to the organization that is built on collaboration and coalition building.”

One of the ways he has helped do so is through the launch of the Judicial Portrait Project, an initiative to honor and thank the service of the LGBTQ+ judges who have adorned the city’s courtrooms.

“We thought it was very important that if this where justice is being carried out — in a court of law — we need to recognize that when we walk into a courtroom and we’re not seeing those who came before us in a way that honors and respects them, that’s a problem,” said Kulp. “It’s been an effort to raise awareness, raise funds… and also an opportunity to inspire.”

Storytelling With a Greater Purpose

It was a popular TV series that inspired Rasheed Ajamu to pursue his career path.

While an undergraduate student at La Salle University, he studied communications but was undecided about the track. Tapping into his high school work doing filming and photography, he decided to explore journalism.

A native of Germantown in Philadelphia, Ajamu now gets to report on the very neighborhood that raised him with the Germantown Info Hub, a community-based project spearheaded by Resolve Philly.

Resolve Philly is journalism centered around solutions, a key element that is often missing from the practice.

“There’s so many different articles that can come out in a day about the same story, but I think if nobody is actually reporting on what can be done, what’s actually currently going on around not just the city or even a neighborhood, but around the world, and looking at how other models work and how you can bring them to a specific area, it makes all the difference,” said Ajamu.

Being a Germantown native and meeting individuals in the neighborhood for his stories has taught him some valuable lessons about himself and his role as a journalist.

“What I’ve learned about working with these folks is that you can live somewhere and not know the inner workings… you don’t know as much as you think you know,” he said.

Different people in the neighborhood may have different ideas about how their communities should look like and be reported on. However, journalists who are doing these stories have an important role to play.

“When people tell you things, you can’t just shape it the way you want to shape them. You have to take a step back and let those people tell the stories for themselves,” Ajamu added. “It’s a struggle, but at the same time, it’s honest. It’s taught me to be less biased.”

Coming to the United States as a 21-year-old who had spent virtually her entire life in Mexico proved challenging for Andrea Gonzalez.

Born in Buffalo, Gonzalez’s family soon moved back to Mexico shortly afterward, where she spent over two decades before returning to Buffalo to finish college.

“I came here barely speaking English, and it took a lot of effort to be able to find a way to get into college, to finish college, find support, organizations, colleagues, mentors, as well as financial opportunities to be able to bridge the gap that perhaps more settled families here in America would take for granted,” Gonzalez told AL DÍA.

As part of a family who struggled with financial security, her work surrounding housing and economic opportunities stems from her personal experience.

While pursuing her degrees, Gonzalez’s family was going through a home foreclosure.

“That was our first family home that I arrived to live in when I came to America, and it was just heartbreaking to see my family putting all their effort into one thing. And at the same time I'm putting all my effort into getting my degrees,” said Gonzalez.

So, she felt torn. Should she help her family or continue pursuing her degree?

“That’s a choice that I don’t wish upon anyone,” she added.

To Gonzalez, things like education, housing, food and healthcare should be human rights for everyone, and not be reduced to an either/or scenario.

It’s that mindset that drives her today as an urban planning consultant at Guidehouse.

“Everyday, I am at the table where policies are drafted,” said Gonzalez.

In her role, she meets with city and state government officials about housing programs being launched and informs board members on how existing policies perpetuate housing and economic inequality.

Through case studies and papers, she is able to bring up concrete examples and consequences on how these policies are disproportionately impacting others.

“I feel like my job at Guidehouse has given me that platform,” said Gonzalez. “I kind of plant the seeds in the minds of the people that are making policies so that they can make better informed decisions that result in greater opportunities for current families and for future generations.”

Driving Philadelphia Towards the Future

The city is filled with young, diverse leaders who will continue to play key roles in driving the city and our society towards the future.

The goal with the annual AL DÍA 40 Under Forty is to shine a light on the work being done and provide a platform for these young leaders’ voices to be heard.

While the recognition is great, the work doesn’t stop and these individuals share that same mindset.