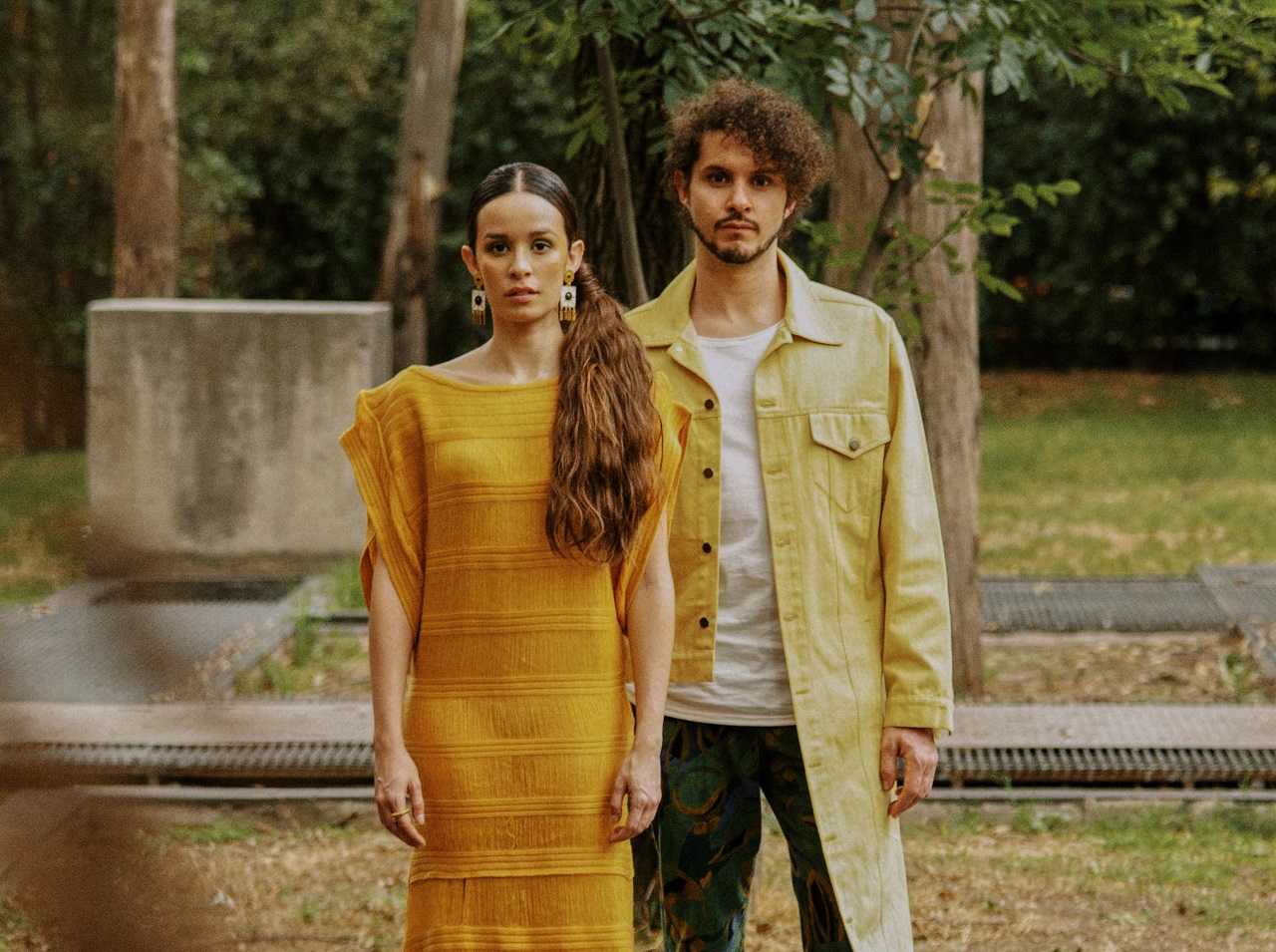 Monsieur Periné: "Latin has become part of the DNA of world music, it's like a reversed recolonization"

Their songs transmit good vibes and desire to embrace humanity

At first glance, Monsieur Periné may seem like a snobby Parisian group. But it's more than the name, and is a cool band from Bogotá, Colombia, founded by Santiago Prieto and Catalina García while they finished their musical studies. Their sound can be defined as an original cocktail that mixes Latin American rhythms with classical European music.

Away from reggaeton and the urban sounds that stand out so much in the Latin musical universe, their dynamic songs, which transmit good vibes and a desire to embrace humanity, are a success. Their last album, Encanto Tropical (2018), generated a Grammy nomination, and has more than 120 million streams.

They are currently finalizing a new album, co-produced by Rafa Sardina (Calle 13, Stevie Wonder). Even with the popularity, they remain humble and want to grow and innovate. As a taste of the new album, the Colombian band released "Tú y Yo," a single featuring Spanish singer Vanesa Martín, that defends the right to love whoever. From the garden of his Bogotá home, Prieto gave AL DÍA a sneak peek of what's to come.

How did the idea of ​​"Tú y yo" come about and how would you define its style?

It's a song we wrote three years ago, inspired by a bandmate, Linda, who came to Colombia from Holland to learn salsa. She inspired us because she has a very beautiful and exemplary love story with her best friend and today, partner. She confessed her love, but if it doesn't work out, they can still be friends with no problem.

In “Tú y yo,” we defend free love in every way possible, and show how there are people who cannot love freely because they face many social structures, pressures and discourses that prevent them from doing so. It's a romantic song, a slow merengue with bossa nova influences. Rhythmically, it has a very Brazilian guitar, and also other wind arrangements, influenced by swing and jazz. It's a mixture, like everything we do. A song that brings joy with a powerful message.

You make an open defense of free love and LGBTQ+ rights. However, there are those who insist that this is an exaggerated claim, and there is no need to overexpose the issue.

There are many who are against this, but it has to be made visible since it is a minority and an oppressed population. Sometimes it is commercialized and companies turn it into a business and some essence can be lost. Nevertheless, it is important that everyone can freely choose what they are without being judged or discriminated against. I understand that there are people who don't like it, but it is a mechanism to encourage people to tolerate it more, and to structurally establish a more equitable and respectful gender issue.

The new single is a collaboration with the Spanish singer Vanesa Martín. How did this happen?

We met Vanesa for this collaboration. She came to Mexico and we met to record the song and the music video. It was the amazing, meeting her and her music and getting together with her energy. A collaboration is a meeting of visions and talents. She's a great singer, she composes super cool, and she brought an amazing vibe to the song. She has a beautiful voice. She invited us to perform with her band in Miami. Her music, lyrics and style is very consistent with what we do.

You are a band of many styles and instruments. How does the songwriting process work?

There are various paths. Most of them were written by Catalina and me, and we have also worked with other composers. It's rewarding getting together with people who do things differently. "Tú y yo" is composed together with Servando Primera and Yasmil Marrufo, Venezuelan composers and authors. The origin of the songs is diverse, sometimes it is triggered by a harmonic loop or some chords as a starting point. It can be a chord, a melody, a letter, through a beat... Most of the time we do it the old-fashioned way, not starting from the computer or the production, but starting from the song itself and looking for its integrity. Creating a powerful melody that holds up a cappella, and a lyric and concept that sticks with it. Compose without so many gadgets and look for the essence of the song.

Naty Agudello directs the music video. Was it her idea alone, or was it a joint creative production?

We have been working together for a long time. The video for "Nada" was also directed by her. The music videos have been a co-creation, and Cata also had a lot to do with the image of "Tú y yo," which she decided to shoot in Mexico City, in the neighborhood of La Roma. It is a simple video, very aesthetic and calm.

The powerful thing is the stories that are shown there, which are real stories that couples have. Different types of relationships that decided to show themselves with us and create a very beautiful piece of art. It was very beautiful and unusual — all the production team were women, without prior planning. Being a man, it was an incredible and enriching experience. In the music industry, most technicians, directors and producers are men, so the male vision dominates.

There’s a scheduled extensive North American tour in July. What expectations does it generate, and how do you feel as a Latin band performing in the U.S.?

Well, we have gone to the U.S. the last five years in a row [not counting COVID-19 delays]. There is something special — our audience is not entirely Latino, maybe 50-50. There are many Americans who don't speak Spanish who go to our concerts, and that's very nice. People who like other types of music and connect with what we do, despite the language barrier. Latin music is very popular in the U.S., and we are excited about this 22-concert tour, visiting new cities, as well as performing in Canada, Puerto Rico, and the Dominican Republic.

Latin is what is fashionable throughout the world, and that defines the sound of world pop inclusively, even the Anglo-Saxon. It got very much into the DNA of the music, it's like a reversed recolonization. Latinos in the U.S. are no longer a minority. In a decade, the number of Latinos or people of Latino origin, with blood, education and language, will be a giant force.

Encanto earned you a Grammy nomination. What is the goal with the new album?

For now we are closing the mix of this new album, which we recorded between December and February in Bogotá with Rafa Sardina. More than to win prizes, which is a collateral effect, the primary intention of each album is to enjoy making music. On the other hand, trying to take some artistic risks, doing something that hasn't been done to evolve. Innovate so as not to repeat ourselves. There is also a message — we are talking about peripheral positions, as in "Tú y yo." Statements about nature, the environment... It's an album that, like everything else, has a political position regarding life and society. I hope it brings something good to the lives of those who listen to it.

Streaming platforms are big for you. "Nuestra canción" has more than 34 million views, "Bailar contigo" more than 50 million...

We take it very well. Rather than freak out about being famous, we give thanks. It give us health and abundance to continue creating, and these numbers have reaffirmed this intention. It is nice to know that it is successful and that people like it beyond marketing. Our music is not mainstream, so it's an accolade. As an artist, one sometimes feels insecure and mistrusts what he does, it's a long and hard road. This allows us to continue trusting in the vision we have, because when one begins to grow the pressure begins.

Never before was there the possibility of reaching so many people, and it is satisfying to know that our music reaches people from all over the world who connect with the universal language of music.

Looking back, how do you rate Monsieur Periné's journey?

It all started unexpectedly, we never thought we would get anywhere. We met Cata and started playing at birthday parties, weddings and baptisms. In 2012, we recorded our first independent album Hecho a mano, and something extraordinary happened — it became a gold record in Colombia with more than 10,000 sales.

Here we are after all, we have been able to survive ourselves, we have built not only a band, but a company, with an organization of musicians, technicians, videos, press... When we look back, it is very nice, because it has been a great learning. We consider ourselves very lucky. The most important thing — we are happy, we are at peace with what we do. Our success is not a luxury car or jewelry, but dedicating ourselves 100% to what we like.