The Kings of la Salsa prove that aging is mandatory, but being old is optional.

Those who know about salsa remember with nostalgia those years in which the shy Son Cubano merged with the psychedelia of jazz in the New York scene — and with that fusion, Latin American music was forever changed.

It was thanks to a young Puerto Rican, who then called himself Ricardo Ray, that the new sound was called salsa (sauce), because of the flavor it gave to traditional music. Along with Bobby Cruz, Ray would lay the foundations of one of the most important musical phenomena in history.

Fifty years have passed since then, but seeing the two legends perform live is still an unforgettable experience.

A recent concert on the island on Feb. 23, billed as “One Last Time,”opened with “La zafra.”  After just a couple of chords, the thousands of fans that filled the “Jose Miguel Agrelot” Coliseum of Puerto Rico immediately recognized the hit song and welcomed their idols with a standing ovation. Richie and Bobby had come back home to celebrate fifty-five years making music together.  They may have traveled the world as salsa ambassadors, but when it comes to celebrating the most important moments of their careers, their roots seem to always pull them back to their island.

The chemistry these two musical legends share both on and off stage is the result of the fusion of two completely different life stories.  Roberto “Bobby” Cruz was born in the rural countryside of Hormigueros, a town in the southwest of Puerto Rico. He moved to Brooklyn with his mom when he was fourteen following his parents divorce.  That’s where he met Ricardo Maldonado, known today as “Richie Ray,” the son of Puerto Rican parents who was born and raised in Brooklyn. Though sharing a connection to the island, the two were totally different people.  While Bobby was throwing punches as a teenage gang member on the streets of New York, Richie was already studying classical piano and bass when he was seven.   The kid was a musical prodigy trained in the world of classical music and eventually graduating from the prestigious Julliard School of Music in New York. The kids met through their moms, who happened to work together.  At the time Bobby was nineteen and already had his own band.

“Richie was twelve when he started playing bass with my band.  He was so small the bass was bigger than him,” recalled Bobby. “Since my band played other group’s music, I would give Richie records of what we wanted to play and he would transcribe the music from the record to paper so my musicians could read it.”

Bobby, unlike Richie, was self-taught.  He learned on his own how to master and develop his unmistakable voice.  Today, at eighty- one, an age at which most singers have lost their vocal abilities, he still sounds as sharp as always and assured AL DÍA in an interview that his vocal chords are “as strong as those of a twenty year old.”

According to Richie, he immediately recognized in Bobby an incredible natural talent.  “He had all this music in his head, plus he knew the language and was familiar with the Puerto Rican culture I hadn’t grown up with, being raised in New York,” explained the pianist.  “I was also impressed by his tremendous drive and the fact that he was very street smart.”

The meeting of these two kids in 1964 led to the formation of one of salsa’s longest and most stable collaborations to date.  Richie says that the reason they are still together is that they allowed themselves “to be totally different with all our crazy stuff.”

Looking for a beat

There was one thing they always seemed to agree on from the start. They knew that if they wanted to achieve success, they would need to create a sound that was totally different to what was being played at the time.  And what was being played consisted of rhythms like the “cha-cha”, the “mambo,” and the “pachanga,” by orchestras such as Machito’s, Joe Cuba’s and Tito Puente’s, among others. With this goal in mind, the two musicians started experimenting with different harmonies and orchestrations.

“Suddenly all that classical music in me started to sneak in,” explained Ray.  “And that’s how we created a sound that people started to recognize immediately.”

Once they started recording, “The Kings of Salsa” admit to having harassed the most important radio stations of the time so they would play their music. They were the first orchestra to use electronic bass and piano in salsa and also the first to have their own sound system for their performances.

Professional success came a lot quicker than they had expected, but in Richie’s case, it came with a twist, as his artistic triumphs profoundly affected his already rocky relationship with his dad. 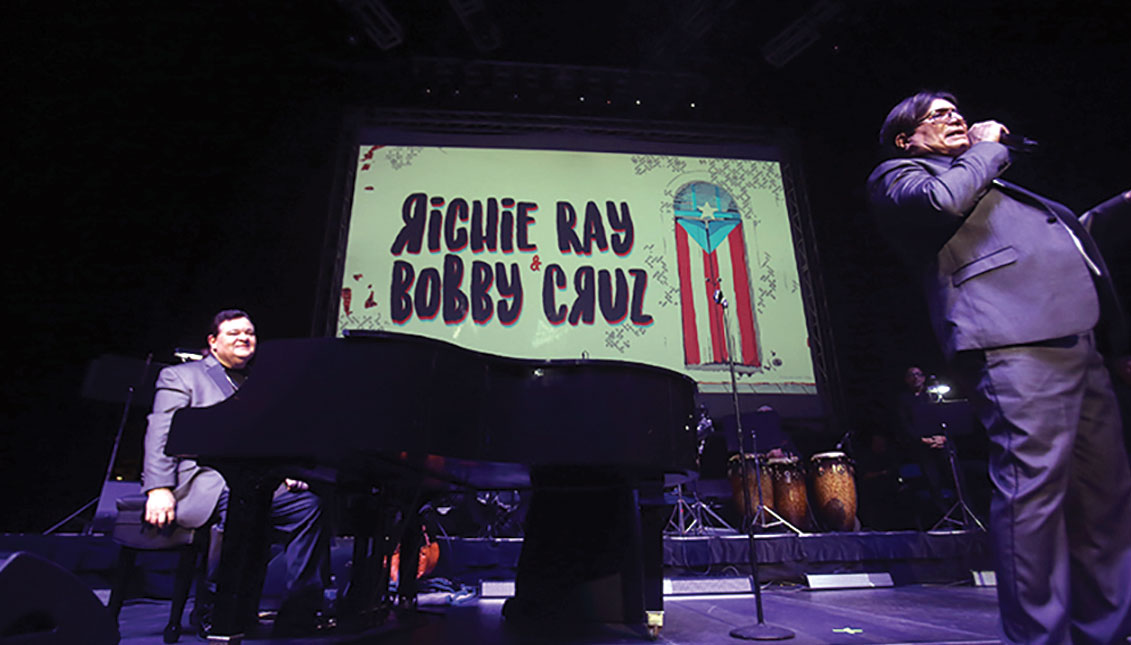 “My father was bipolar, although we didn’t have a name for his condition back then.  He suffered from drastic personality changes,” sais Richie. “Our relationship had always been difficult, but after I decided to abandon classical music to play popular music it became worst. He never understood it.”

Bobby, as Richie’s elder by seven years, then became a sort of mentor and paternal figure for the boy.  The singer noted that he still can see in his career partner that kid he met.

“There’s a saying that goes: ‘aging is mandatory but becoming old is a choice,’” he said.  “Richie is a kid. He has always been a kid and always will be.”

Listening to the powerful sound these two mega talents create takes many of us back to the parties and dances of the seventies and eighties.  Songs like “Jala Jala,” “Mr. Trumpet Man,” “Agúzate,” “Sonido Bestial,” and boleros like “Yo sé que te amo” and “Cuando me digas sí” are forever embedded in Latin America’s popular culture.

When the stage meets the faith

Even after 134 musical productions, millions of records sold, 16 gold and platinum records, and the Latin Grammy for “Excellency in Artistic Career” awarded to them in 2006, Richie and Bobby seem to be far from retirement.

“I have announced my retirement around twenty times,” said Bobby with his characteristic sense of humor, “but someone always offers me enough [$] to motivate me to come back.

Richie said, “We’ll keep on playing as long as I can get up on stage, even if it’s in a wheelchair.”  After February’s 55-year celebration concert in Puerto Rico, they went on to perform in Mexico, Colombia and Florida.

Both musicians have made Florida their homes.  Richie, who never had children, has been married for forty years.  Bobby has been with his wife for more than fifty and has three children.

“The three of them sing, but none of them are interested in popular music.  They chose the church,” says the proud father. “One of my boys sounds exactly like me when he sings.  He’s the pastor of the first church Richie and I founded together.”

The church Bobby refers to was followed by dozens more throughout Latin America, the Caribbean, the United States and even Europe.  The ministry founded by these two brothers in faith and music started with Richie’s conversion to Christianity forty- five years ago.

“Everything was going great for us, but I didn’t feel accomplished”, explained the pianist.  “It’s as if something were missing, as if there was a pain and an emptiness that wouldn’t go away.” It was a friend who was working as a back- up singer with their orchestra who took him to a Christian church for the first time.

After Richie embraced the Christian faith, both Bobby and his wife followed.  Over the course of many years, they worked on preaching and building their ministry and although they kept making music, they limited themselves to Christian themes.

They later separated and each went on to work on independent projects.  But in 1991, they decided to play together once more, For this re-encounter they brought onstage a new repertoire that combined both their greatest hits and the Christian salsa that’s still today is part of their shows.

Although both Richie and Bobby agree that their faith is still the engine of their lives, neither of them are actively involved as ministers today. Bobby plays more of an administrative role, supervising the ministry they have founded.  Richie is very involved with the “Spring of Life Church” in Miami, which was founded by one of his “spiritual sons.”

As for new projects, both musicians agree that creating new things is always going to be a challenge because they have become “slaves of their success.”  “What the fans want to hear is “what has made us famous."

“That’s what they want,” explained Bobby.

In spite of recognizing this, both artists have been working on independent projects which we can hopefully expect to be released this year.

Bobby is currently negotiating the release of a musical production which includes both new and traditional salsa songs, and for which he did all the arrangements.

“I have a version of ‘El cumbanchero’ where I emphasize the role of the bongo,” he explained.  “If you recall there is a line in the song that says ‘bongosero que se va’ (the bongo player is leaving).  I never understood why the bongo player has to go if he’s the most important part of the song. So, I decided to make him the priority.” Richie, on the other hand, is about to release an instrumental production which includes a composition based on a classic piece he enjoyed playing on the piano when he was seven: “The flight of the bumblebee”.  In an interesting twist, the inspiration for this composition came to him while watching Angelina Jolie in an action film.

“One day I see her kicking ass in a movie and I said to myself: ‘That’s the queen bee and the bumble bees will be following her.’  And that’s how the idea was born,” Richie noted.

After mastering classical music, jazz, and Afro-Antillean rhythms, is there anything left for Richie Ray to accomplish as a musician?  Are reggaeton and trap out of his musical spectrum?

“I don’t know Daddy Yankee personally, but I’ve heard there is some Christian faith in his background.  I think that would make an interesting collaboration. As for Bad Bunny, who knows…I wouldn’t do it for money or fame, I’d just do it to allow my message to reach new audiences,” Richie said.

The “Kings of Salsa” keep surprising us with their ability to reinvent themselves without sacrificing the sound that defines them.  There’s no doubt that after fifty- five years together, Richie Ray and Bobby Cruz are still living their faith and their passion for music in, as the lyrics of one of their hits would say, “their own way” (A su manera).