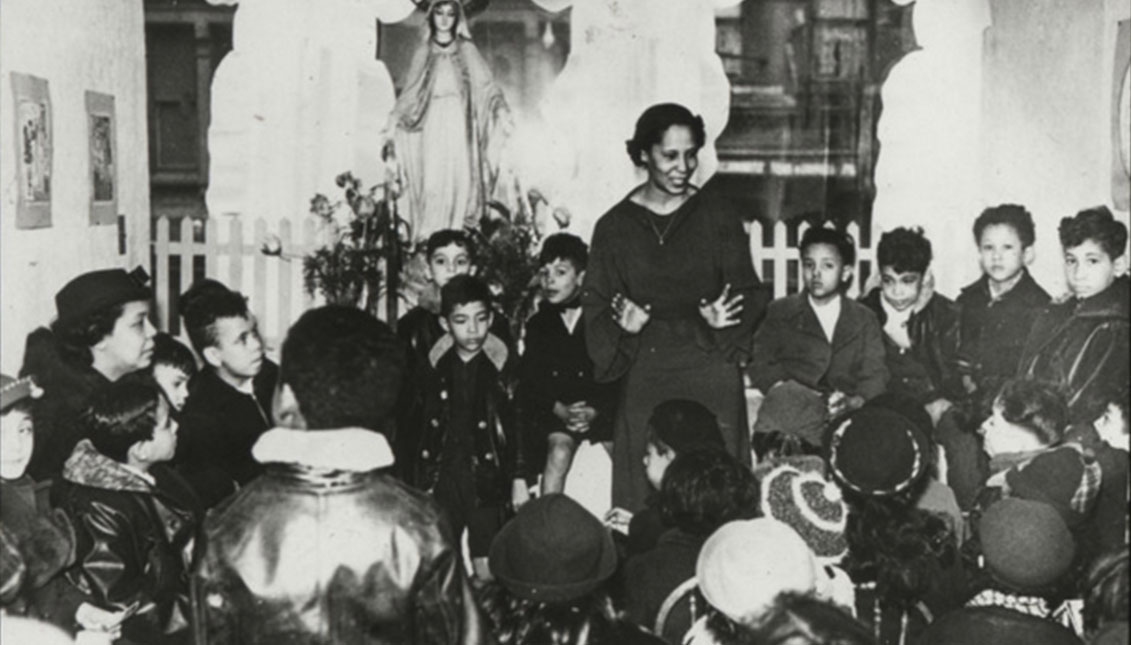 During Women's History Month, New York City's City Hall has added four more portraits to an exhibit on historic NY women. Belpré is one of the most beloved new…

Pura Belpré first came to Manhattan from her native Puerto Rico in 1920 to help with a sister's wedding. She no plans to stay, and was going to be a teacher on the island. However, Belpré,  who would become a legendary librarian and storyteller, ended up living in the city until her death 62 years later.

During those years, she loved books, puppets, and children, and gave a lot to New York. She was not only the first Latina employee in the history of the New York Public Library, but the first Puerto Rican within the city's public library network. In 1932, she even published a classic of Latino children's literature in the United States, Pérez y Martina, based on a popular Puerto Rican tale with Spanish roots.

Opening the Way to Diversity

Through her oral narrations and puppets – which were first were seen throughout the city's library network – she managed to get Spanish onto the shelves in New York City. Her effort to promote Hispanic culture also came at a time when the Puerto Rican population was growing in New York and it needed an anchor.

Pura has also inspired hundreds of Latinas to become librarians. One is Valeria Garcia, also of Puerto Rican descent, and a librarian in the children's section of the NY Public Library. Garcia's mother, Belen, worked for more than 40 years at NYPL and knew Belpré well.

"Oh my God, tell your friends at school that there's going to be a Hispanic lady telling a story," Valeria told NPR of her mother's enthusiastic words when Pura began bringing her bilingual stories to the neighborhoods to make the migrant children feel at home.

"As I read about her [Belpré], I thought, 'I can do this. I can read books to children in Spanish and tell their parents about the resources the library has for them," she said.

The Women Who Made Cesar Chavez
March 23rd, 2022
The Feminist Street Initiative aims to get more streets named after historical women
March 1st, 2022
Weed entrepreneurs and their battle to sell in New York
February 22nd, 2022

"Thanks to her, we have a Spanish story hour," says Rivas. "We have computer classes in Spanish. And I feel that as a Latina librarian we have a responsibility to continue doing the work she started."

It had such an impact that each year the American Library Association presents an award in her name to recognize the best books for children and young people written and illustrated by Latinos.

Nationally, the proportion of Latino authors is still very low, especially considering that 25% of U.S. public school students are Hispanic according to NPR.

Alongside Belpré's portrait in the second edition of the exhibition "Women's Voices: Shaping the City," is another of Puerto Rican activist, educator Ana Pantoja (who was inaugurated last year). Other members of Belpré's class are African-American civil rights activist Elizabeth Jennings Graham, LGBTQ-advocate Edie Windsor, and China's Chien-Shiung Wu, a physicist and mathematician from Columbia University.

According to Helen Rosenthal, chair of the Women and Gender Equity Committee of New York City Council, the inclusion of these four "iconic" activists in the exhibition "begins to address the pervasive absence of women in what is considered the 'official' history... In unique ways, these women changed New York, and the world, for the better."