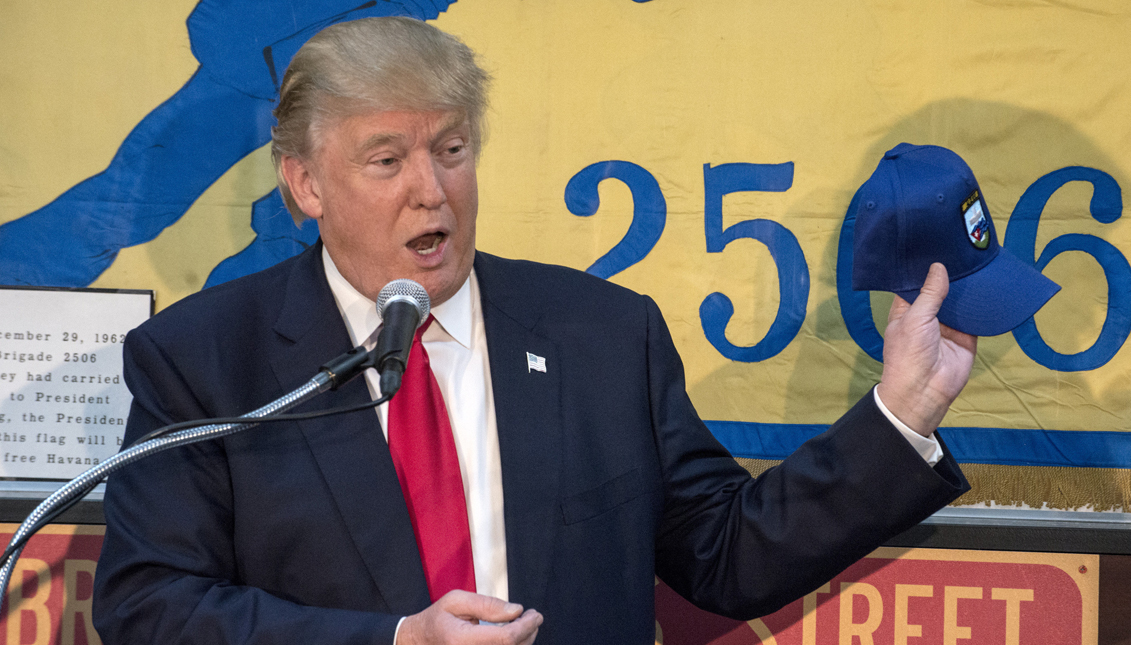 The Republican presidential candidate US, Donald Trump, speaking today, Tuesday October 25, 2016, during a visit to the Museum of the Combatants of the Bay of Pigs Invasion in Miami (Florida). EFE

To call this presidential campaign unconventional is, well, like calling Donald Trump a nice guy. The blowhard Republican presidential nominee is the opposite of nice and the campaign is much more than unconventional:  it is an aberration. Weirdness has been the norm and ironies are plentiful.

Take, for instance, the role Latino voters have played as a result of the GOP nominee recklessly disrupting the process, making a mockery of it and turning it on its head.

To call this presidential campaign unconventional is, well, like calling Donald Trump a nice guy. The blowhard Republican presidential nominee is the opposite of nice and the campaign is much more than unconventional:  it is an aberration. Weirdness has been the norm and ironies are plentiful.

Take, for instance, the role Latino voters have played as a result of the GOP nominee recklessly disrupting the process, making a mockery of it and turning it on its head.

More Latinos are expected to vote on November 8 than ever before and, consequently, they should have a decisive participation in Election 2016. According to the NALEO Educational Fund, more than 13.1 million Hispanics will cast ballots across the nation, a 17% increase in turnout and 8.7% increase in the Latino share of the vote from 2012.

So important has the Latino vote become that Democratic vice presidential nominee Tim Kaine said that the United States was in the midst of "a Hispanic moment.”

This being the case, and after the fundamental role Latinos played in making Barack Obama President twice, one would expect for Hillary Clinton, the Democratic hopeful, to fiercely pursue their support. Yet, her campaign has concentrated its efforts on states like Florida and Nevada with large Hispanic populations and neglected the traditional Spanish-language ad campaigns in key markets.

The strategy, critics believe, is not broad enough.

“We’re not a three-state community, we’re a 50-state community,” Arturo Vargas, executive director of the NALEO Educational Fund, told the Washington Post. “Latinos are ignored, and there is no real outreach.”

“A lot of it has evolved to include outreach that isn’t obvious to people who are used to doing it old school,” María Cardona, a long-time democratic strategist told the Post. “The Clinton campaign and the DNC are very strategically focused on Latino millennials.”

Whatever the case may be, there is another reason for the Democrats limited effort to persuade Latinos to cast their vote for Clinton on November 8: Her Republican rival is doing their work for them.

That is, why bother when Trump’s hateful rhetoric is pushing Hispanic voters into the Democratic fold? Latinos are not fools nor are they masochists, and certainly they are not about to favor someone who has based his campaign on insulting them, lying about their character and promising to persecute, imprison and deport them.

As it happened four years ago when Mitt Romney advocated the self-deportation of Latinos, Hispanic voters, who flocked to Obama then and propelled him to victory, will choose the Democratic nominee on Election Day, not so much because they like Clinton but because they dislike the billionaire blowhard so much more.

“Trump is a fascist, he hates us, if you are not white he doesn’t care about you,” said Guatemalan-born, American citizen María Arias, a 30-year old personal trainer in Manhattan. She could have been talking for millions of people all over the country. “Hillary hasn’t been good to my country, but still is better than Trump. I’ll vote for her because I would have to be crazy to vote for Trump.”

As Trump’s white supremacist, “bad hombres” campaign crashes into a cesspool of revelations about his repugnant behavior toward women, his insistence on absurd schemes like building a border wall and making Mexico pay for it, his ridiculous temper tantrums and his stubborn denial of his failure as a politician and a human being, is obvious that, ironically,  Clinton, who is poised to become the first woman President of the United States, has to be grateful to her racist and misogynist opponent’s unintended contribution to her victory.

"The Latino vote could be the difference in this race. The power of the Hispanic vote in key states like Nevada, Colorado, Virginia, Florida, Arizona and North Carolina ... could decide our future president more so than in any other election in our history," Kaine said.

Yes, it could, but only if everybody –I repeat, everybody—goes out and vote against Donald Trump and his hateful ideology on November 8.