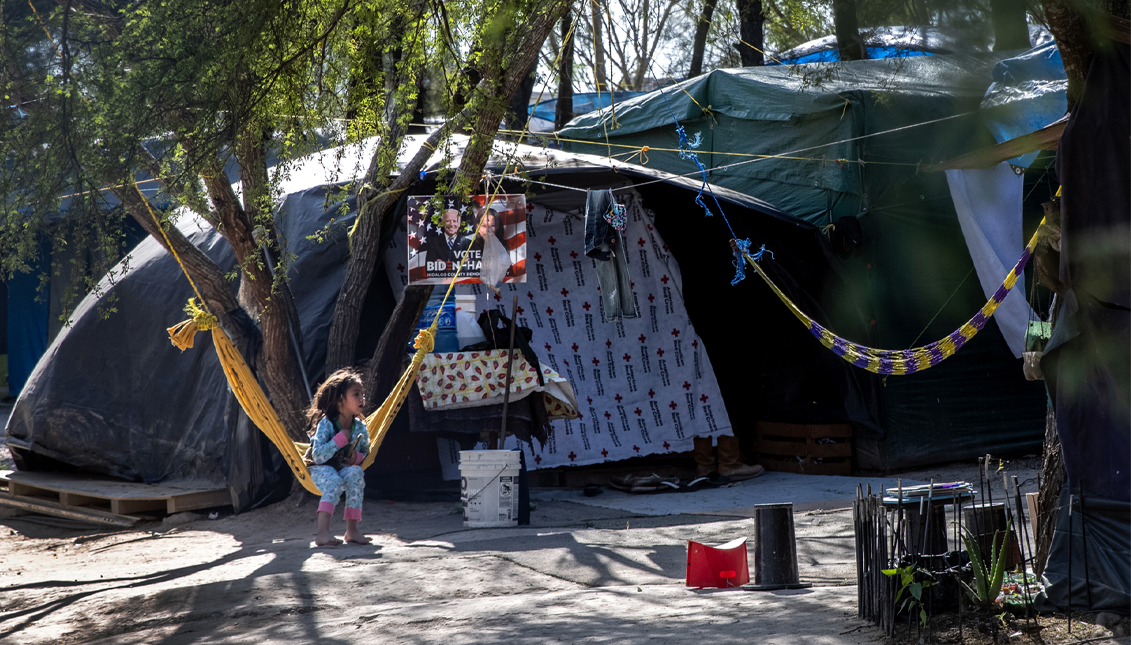 A Salvadorian girl sits near a Biden-Harris campaign poster inside a camp for asylum seekers on February 07, 2021 in Matamoros, Mexico. Many of the some 600 people in the camp, most from Central America, have been living there for up to a year, waiting…

Democrats controlling the Senate and President Joe Biden upholding his promises were always going to be crucial to seeing substantial reform in the realm of immigration policy.

Both congressional Democrats and the White House have quickly gotten to work in recent weeks with various planned pieces of legislation that have been discussed, and Biden has signed several executive orders to undo policies from the Trump administration.

The latest moves from Washington address immigrants in the United States who are on Temporary Protected Status (TPS), and many of the people who sought asylum as part of migrant caravans over recent years.

What TPS was intended to do

TPS has been in place since 1990 and it provides temporary legal status to groups who are unable to remain in their home country due to ongoing armed conflict, environmental disasters, or other critical situations.

The humanitarian program received resounding bipartisan support as it was introduced by the progrressive former Senator Ted Kennedy and signed into law by Republican president George H. W. Bush. It aimed to assist Central Americans who were fleeing their countries after a string of violent earthquakes and military coups.

Countries like Syria, Yemen, Sudan and South Sudan have recently been named TPS countries within the last decade due to continuing civil wars. The head of the Department of Homeland Security is in charge of designating what countries can have people apply for this status.

Trump’s Attacks on the Program

Termination for the program in these countries was going to occur in 2021. If Trump had won a second term, immigration activists would have fought to protect those who were on TPS from the six other countries who have it available to them.

Senator Bob Menendez (D-NJ), the new chair of the Senate Foreign Relations Committee recently introduced the Venezuela Temporary Protected Status Act of 2021 and would protect over 200,000 Venezuelans living in the US.

If passed, the bill would give more security to people trying to escape the regime of Nicolas Maduro. One of Trump’s last actions as president was signing an executive order to defer the removals of Venezuelan exiles for 18 months.

The former president ran on a hardline immigration approach and it delayed him from extending any kind of protected status to Venezuelans. Members of his own party, like Florida’s Senator Marco Rubio, fully back the bill introduced by Menendez.

On Monday, Senators Chris Van Hollen and Ben Cardin (both D-MD) reintroduced the Safe Environment from Countries Under Repression and in Emergency (SECURE) Act along with Senate Majority leader Chuck Schumer.

This piece of legislation seeks to allow TPS recipients to apply for permanent residency. This would offer over 411,000 immigrants a potential pathway to citizenship.

Currently, the SECURE Act does not have a Republican Senator in support, but its proponents are still hopeful.

The likelihood of it becoming law is also hindered by the fact that it is its own separate bill, and not included in the new sweeping immigration reform bill that Sen. Menendez introduced on behalf of President Biden.

Democrats will have to convince their colleagues on the other side of the aisle that TPS recipients should be granted the possibility of a green card and that they do not deserve the uncertainty that comes with having to apply for their status every six to 18 months.

"TPS holders are our neighbors, friends and colleagues and many have lived in the U.S. for decades and call America home. These individuals have made countless contributions to our communities and businesses and many have served on the frontlines of fighting the COVID-19 pandemic. It is essential that we stand with them by working to pass the SECURE Act,” Senator Schumer said.

Migrant Protection Protocols, also known as the “Remain in Mexico” program, was implemented by the Department of Homeland Security on Jan. 25 2019. It allowed for non-Mexican asylum seekers to wait in Mexico while their cases were being adjudicated on the other side of the border.

It is estimated that 25,000 Central American migrants are currently in Mexico waiting to know their fate.

They still live in danger as they are in violent border towns and the Mexican government does not have the necessary resources to care for them.

As part of undoing Trump’s immigration policies, Biden wants to readmit these migrants into the U.S. in a measured process. Housing needs to be set aside for them, and they need to be tested for COVID-19.

The readmission process is scheduled to begin next Friday and U.S. officials have said that the ports of entry will be San Ysidro, Calif., and El Paso and Brownsville, Texas.

In his first month in charge, the new Secretary of Homeland Security Alejandro Mayorkas will have a lot on his plate.

The first immigrant to lead the department will not only lead the readmission process but he will also work with the departments of State and Health and Human Services to reunite families separated at the border because of Trump’s “Zero Tolerance” policy.