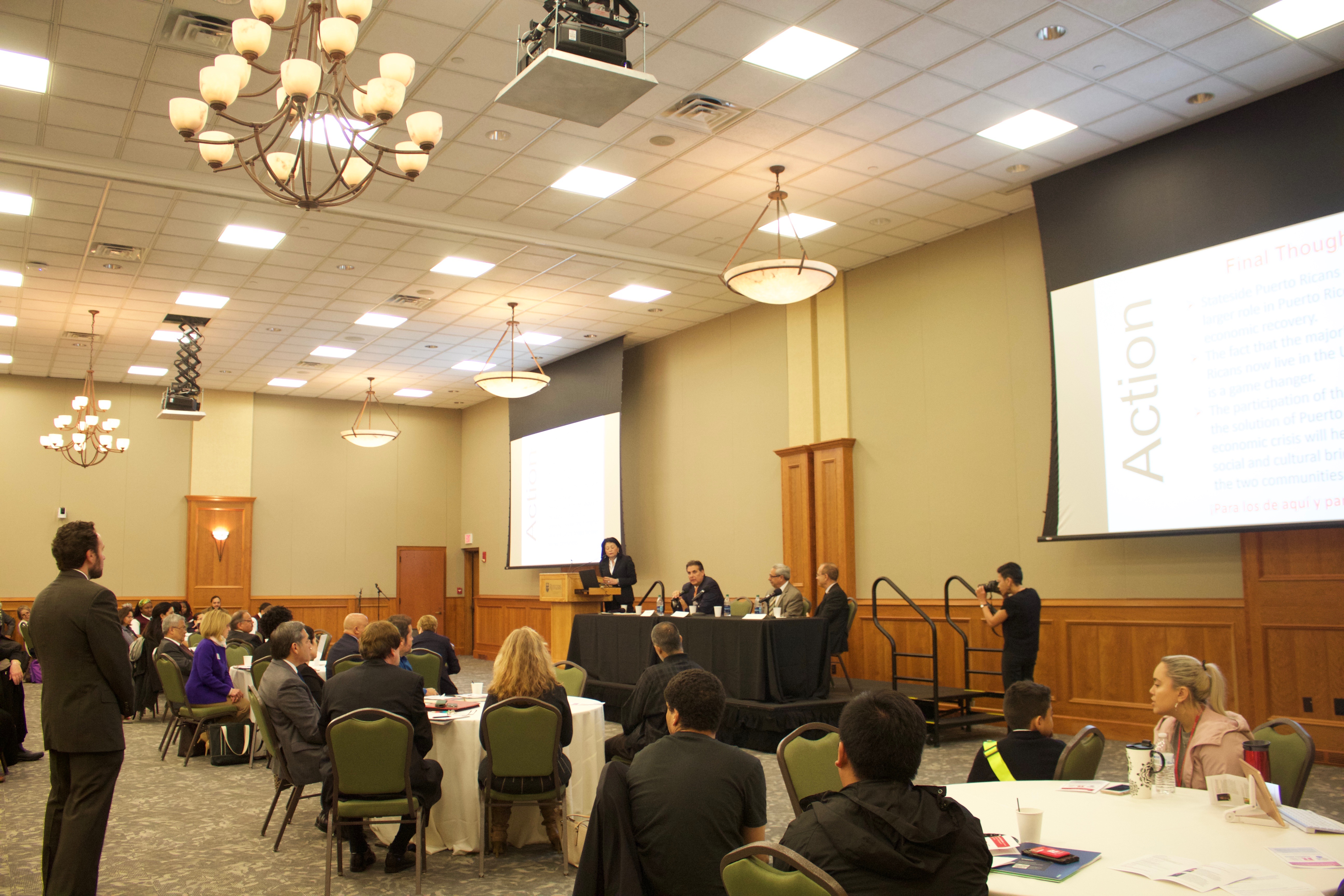 Elected officials, scholars, and activists gathered for a symposium held at the Rutgers-Camden campus on the topic of "A Year After Maria: Current and Future Challenges in Puerto Rico." Photo: Emily Neil / AL DÍA News

A push to ‘reconnect to the future’ of Puerto Rico

On Monday, the Rutgers University Camden campus hosted a symposium to answer the questions that remains unanswered both on and off the island: Where is Puerto Rico one year after the natural disaster, what is its path forward, and what does its future hold?

There are no clear answers, but guest speakers Senator Eduardo Bhatia, a member of the Puerto Rican senate and former president of that body, Jorge Haddock, president of the University of Puerto Rico, and Edwin Meléndez, director of the Center for Puerto Rican Studies at Hunter College, sought to give their insights on what has created the ongoing challenges the island faces and what the next steps should be.

Bhatia explained that the island is suffering from “three storms” that have contributed to the island’s current struggles: the question of what Puerto Ricans’ U.S. citizenship status actually means; the ongoing economic crisis on the island and the role of federal policies in contributing to the creation of the $74 billion dollar debt; and, of course, the worst natural disaster to strike the island in over a hundred years, Hurricane Maria, which made landfall on Sept. 20, 2017 and whose impact will be felt for years to come.

For Bhatia, the key to short-term recovery and long-term stability lies in a reinvigorated economy based on solar energy.

“At the very short-term, we have to rebuild our energy system,” Bhatia told AL DÍA on Monday. “We’re about to unleash in the next 48 hours a very aggressive plan to move into solar energy which will create a whole industry.”

Backed by investment on the part of the U.S. Department of Energy and Congress, the move to grow the solar energy industry on the island is a pathway to what Bhatia envisions as a billion-dollar industry.

“We have the sun, we have the need, we have the resources, so that’s step number one,” said Bhatia, who noted that another important facet of recovery is the need to attract more businesses and investors to the island.

Ultimately, Bhatia said that the island has to “reconnect to the future” to move forward and put into place changes that address all of the “storms” that have faced the island for decades.

The senator noted that one of the ways in which non-Puerto Rican U.S. citizens can make an impact is to connect with their members of Congress.

“People in Congress should know that you care, and that every citizen cares and that Puerto Rico should be considered, should be addressed not as property of the United States but as federal citizens of the United States,” said Bhatia. “To the extent that that starts to sink in, that will make a difference in the future.”

For Haddock, who began his position as president of the University of Puerto Rico in July, said that the future for higher education on the island is tied to attracting more students from the mainland to enroll as well as forging partnerships with universities and other institutions throughout the country — a step which the University of Puerto Rico and Rutgers University were bringing to life that same day, with a signing of a memorandum of understanding that will provide for greater partnership possibilities between the institutions.

“There’s a lot of hope and there’s many opportunities. Need is the mother of invention,” said Haddock. “People are becoming more entrepreneurial, people are having more initiative to create their own businesses and their own jobs.”

“We just need that leadership there to continue to not only bring hope as a concept but also bring hope in the form of opportunities,” he added.

According to Meléndez, the Puerto Rican diaspora and the nearly two-thirds of the Puerto Rican people that now live on the mainland are key in advocating for and effecting change at the political level for the island.

"The diaspora is a great resource," Meléndez told the symposium audience, explaining that it proved to be a huge support since Hurricane Maria and needs to be organized to leverage its political power and solidarity with those still on the island.

"I would propose...to have a national advocacy coalition stateside, because we vote, we vote for members of Congress, we vote for the president, and we have influence over other elected officials to align with us for Puerto Rico," he said.