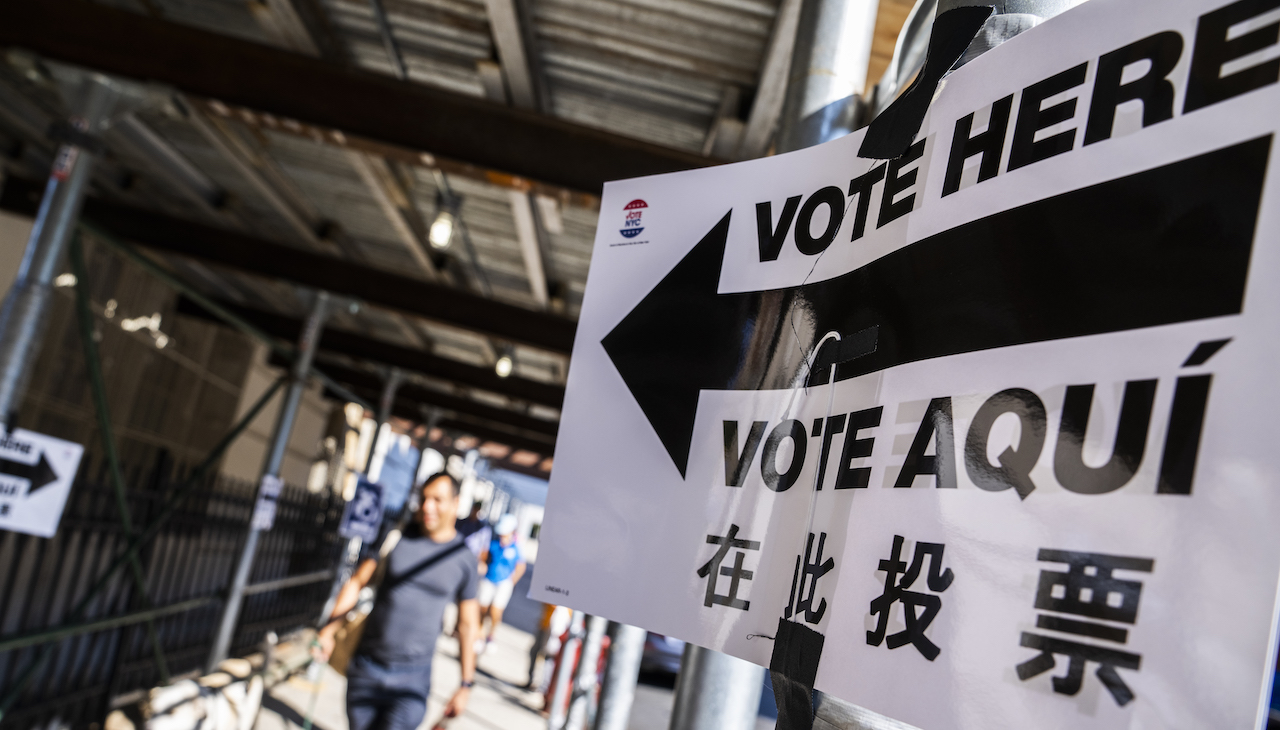 Language Justice Committee is unique in its kind and scale to forward language accessibility at the polls, county by county, polling place by polling place. Photo: Tom Williams/CQ-Roll Call, Inc via Getty Images.

Amid an increasingly chaotic 2022 general election, a Biden ally group mobilized around the clock to ensure the administration’s message and agenda were transmissible to Hispanic voters, oft-ignored voting blocs that have proven to be decisive in local elections on critical policy issues.

Accompanied by this work was a committee that widened the efforts to reach the breadth of naturalized U.S. citizens, eligible to participate in the country’s most democratic process, but who find themselves dissuaded from a lack of available tools to cast a ballot.

Building Back Together spent the better part of last year working on expanding language accessibility for eligible Asian-American, Pacific and Indian (AAPI), Native American, and Hispanic voters across the country via the Language Justice Committee (LJC), helmed by Rubén Lebrón, the committee's director, who reminisced on a year’s worth of challenges and wins.

LJC was the first committee established by Building Back Together in September 2021, assisting 105 counties across 25 states, according to Lebrón.

“Building Back together made language justice a core component of our voting rights initiative,” said Lebrón, in an unequivocal opener to his conversation with AL DÍA, while attributing the committee’s inception to “make sure that voters everywhere have access to election information and materials in the language camp.”

In 1975, Congress expanded the civil rights law, a landmark piece of legislation, to diminish barriers related to language access, and although Section 203 does just that, not every language is covered, compounded by a limited number of jurisdictions determined by census data.

The inaccessible nature of casting a ballot discourages constituents from engaging in the voting process, who over time become disengaged from the political conversation, though not entirely apathetic to policy issues. BBT aims to steer the conversation toward participation, and as part of their efforts, released a six-figure ad buy to communicate Biden’s legislative wins on Capitol Hill.

But at the state level, counties continue to lag behind what resources they’re able to provide. And while this history is long-recorded, there is limited data surrounding specific components missing from polling places for voters to comfortably cast their ballots, in spite of language limitations.

“I think it has to start at the ballot (...) If we cannot choose people that care enough to provide language accessibility and language justice for everybody, that can speak to our communities in a culturally competent way, that can speak to our community in a way that can make them feel valued, we cannot achieve language justice,” said Lebrón.
A poll conducted by UnidosUS, in partnership with Mi Familia Vota, found that in an overwhelming number of cases, the majority of Hispanic voters receive no outreach at all, making LJC unique in its mission and scale to provide language intervention and incentivize voter participation, spanning multiple languages.

To that end, LJC’s work begins with an email to jurisdictions required, by law, to provide language access at polling sites. Lebrón told AL DÍA they work meticulously with each county to find what’s missing, from best practices echoed from other counties, materials required, updating election office websites, and community outreach.

“Sometimes it takes starting from scratch, [because] there’s nothing, but in other places who have a history of providing this assistance, sometimes it’s just looking at your neighbor (...) Sometimes just making those connections and getting folks talking about best practices, that gets us very far,” said Lebrón of the organization’s approach.

“If we weren’t there to make those conversations happen, it would take much longer or they would not happen at all,” he added.

Non-English speaking voters face unique obstacles that impair their ability to cast a vote correctly, namely, the ability to read and interpret the ballot. As such, election clerks and staff become critical to ensuring all electors make their mark equally, and with the assistance of LJC, voters receive an indispensable resource to make an informed decision.

In places like Nye Cunty, in rural Nevada, LJC achieved a partnership between election officials and Shoshone tribe elders to provide Native American voters with accurate translations ahead of the midterms, effectively making Nye county the first to provide this service in the nation ahead of the midterm elections.

“This community has a special place in my heart because they are often not included or have a seat at the table, and they are made invisible by exclusion. When we take a look at our research, jurisdictions with [Native American] voters are often at the bottom of the list in terms of compliance,” Lebrón said of their work to close gaps in a culturally competent way.

But for Lebrón, poll work is half of the equation. He told AL DÍA the committee also engages in advocacy work, rooted in a mission to demystify the election office, in addition to ensuring voters are aware of their rights as it pertains to voting.

“On our committee, we’ve been focused on providing technical assistance, raising awareness of voter’s language rights, and making sure that people speak up and flag any barriers or discrimination in the language space,” underlined Lebrón of the committee’s advocacy efforts.

But LJC’s work, Lebrón said, is just beginning. After they’ve reflexively gathered data over the course of the year, LJC moves toward its next steps.

“Now we’re going to have to look what happens after November,” Lebrón said.

“One thing is accountability. We need to make sure that jurisdictions that are not complying with the law are held accountable (...) We’re going to use the information we compile monitoring the elections in November to submit complaints to the civil rights division at the Department of Justice for further accountability because our citizens cannot wait more years for this,” he added.

The committee’s head also plans to expand the number of places they serve, where voter advocacy can be strengthened, and continue to lay the groundwork for language accessibility for voters and election officials alike.