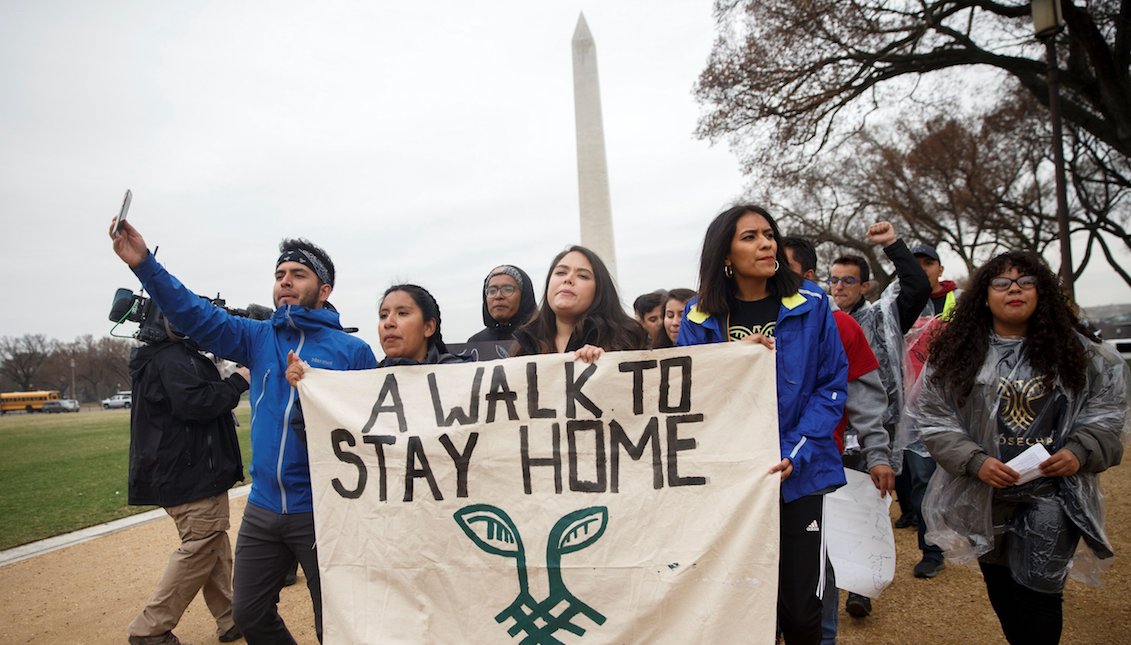 A group of "dreamers" (undocumented youth benefited by the Deferred Action known as DACA) arrives in Washington after making a 250-mile trip from New York, a city they left 15 days ago to ask Congress to find a solution that allows them to stay legally…

After months of ideological clashes and political ineffectiveness, finally March 5 has arrived and Congress is nowhere close to having a legal solution for the status of hundreds of thousands of young undocumented immigrants who arrived in the country as children (better known as Dreamers).

It has been six months since President Donald Trump suspended the Deferred Action program that granted immigration relief to these young people, and that was put in place by the Obama Administration.

In an attempt to destroy everything that his predecessor had started, and lacking professional knowledge, Trump argued then that the immigration issue was unequivocally about "national security", but his argumentative incapacity left everyone with the certainty that his intentions were vitiated by a radical anti-immigrant stance.

"I want the children who grow up in our country to be Dreamers too," the president said, trying to defend his decision to suspend "the illegal amnesties of President Obama" that he insisted on attacking during his campaign.

After signing his executive order, the president granted Congress six months "of grace" to obtain a solution that would satisfy him; not so much to his Republican herd, but to his own political goals (a border wall with Mexico, the suspension of family reunification and the visa lottery), transforming the fate of almost 800,000 young people raised in the United States in a sort of currency to manipulate the fundamental Democratic votes in Congress.

Two government shutdowns later, Congress turned its attention to more determining issues in the bidding for the midterm elections this year (such as the terrible shooting at a high school in Parkland, Florida), and the fate of the Dreamers was sawed frozen and relegated to aisle issues.

It was thanks to the sentencing of two lower courts in California and New York, that the young immigrants obtained a temporary break from their situation, since both judges allowed the temporary continuation of the program, admitting the renewal requests to be processed, although for the moment the Department of Justice has decided not to accept new applications.

To this day, only the Hispanic Caucus in Congress (USHCC) has maintained pressure on the matter through its social media, its party organizations and even a letter sent to the government, where they directly blamed President Trump for having "thwarted every bipartisan, narrow agreement that seeks to provide relief to the Dreamers and instead has attempted to force a deeply unpopular, anti-immigrant agenda through Congress."

This immobility - which feels more like apathy - has all eyes on a Congress that remains in stony silence.

As explained by CNN, Congress would still have some options to resolve the issue, especially considering that March 23 is the next deadline to reach an agreement for government funding, but sources close to the process have assured that "the House Republican leadership has opposed attaching any immigration matter to a spending deal."

As expected, the only plan that has moved some seats has been proposed by the Republican Chairman of the Judiciary Committee, Bob Goodlatte of Virginia, who has been supported by the president thanks to his radical conservative position that would not include a way to the citizenship for the Dreamers, and that has been denounced by the president of the USHCC, Michelle Lujan Grisham, as a proposal "for massive deportation".

At this time, young Dreamers must take advantage of legal circumstances and fill out and submit their re-enrollment requests as soon as possible, considering that the US Citizenship and Immigration Services (USCIS) "has yet to resolve some 102,704 renewal requests," according to Univisión.