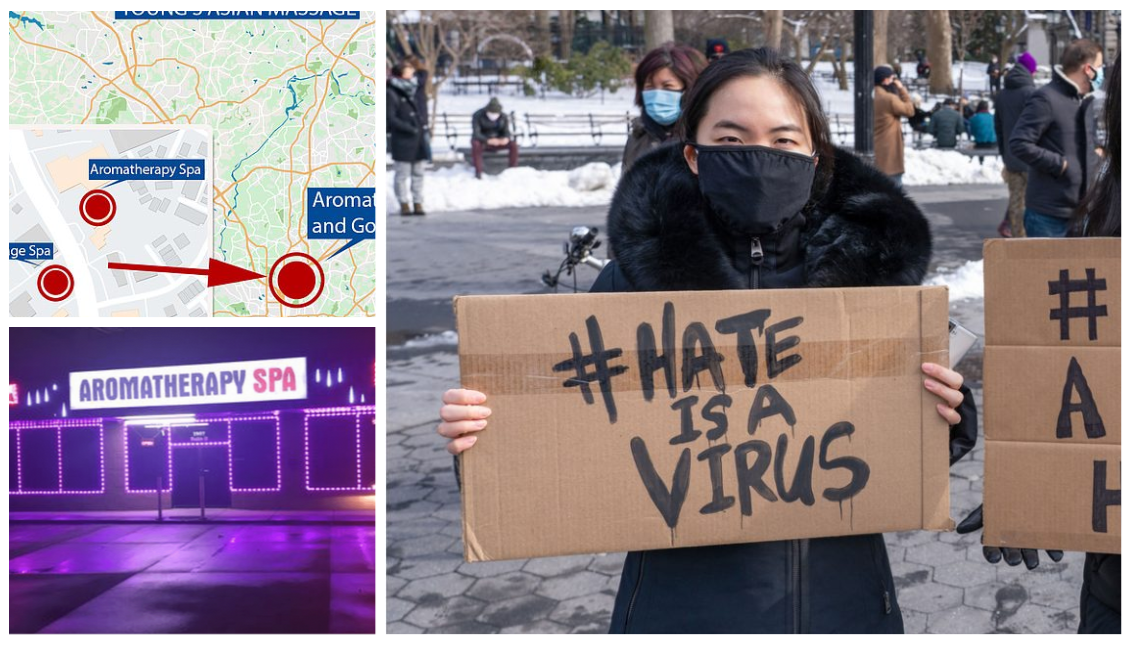 Six of the eight people killed in a mass shooting on March 17 were identified as Asian American. Four were Korean women.

According to the reports, businesses are the primary sites of discrimination, and women are reporting hate crimes 2.3 times more than men. Chinese are the largest ethnic group (42.2%) that report experiencing hate, followed by Koreans (14.8%), Vietnamese (8.5%) and Filipinos (7.9%.)

Stop AAPI Hate released the data on Tuesday, and that night, a string of shootings at three massage parlors in Atlanta left eight people dead, six of them reported to be Asian women.

Though the motive has not been uncovered, officials and organizations have raised serious concerns that ethnicity was a driving factor for the perpetrator.

Asian people have been infantilized, hyper-sexualized, emasculated, culturally erased, culturally exploited and humiliated, the list goes on & to think none of that played a part in the mass murder of multiple working class Asian women is dismissive & a part of the problem.

The shootings began at a parlor about 30 miles northeast of Atlanta, followed by two more at parlors in northeastern Atlanta. South Korea’s foreign ministry, which had been in contact with its consulate in Atlanta, confirmed that four of the six Asian American victims were Korean women.

We are shaken by the violence in our city that has left 8 ppl dead, including members of the Asian American community. We are gathering info about what happened & the needs of directly impacted are. Now is the time to hold the victims & their families in our hearts & with light pic.twitter.com/Hft5H7IZNW

A 21-year-old suspect was taken into custody on Tuesday night and police believe he was likely responsible for all three parlor attacks. The three parlors targeted were Young’s Asian Massage, Gold Massage Spa and Aroma Therapy Spa.

U.S. Secretary of State Antony Blinken, who was in South Korea’s capital to meet with the nation’s foreign minister Chung Eui-yong, brought up the attacks in opening remarks on Wednesday, March 17.

Noting the foreign ministry’s report that four of the six women victims were of Korean descent, he expressed his sympathies to the victims’ families and “to anyone in the Korean community who is shaken and deeply disturbed by this incident.”

Rep. Judy Chu of California wrote in a statement on Wednesday that she was devastated to learn about the shootings and said that the Asian American community “has been facing a relentless increase in attacks and harassment over the past year.”

She encouraged her followers on Twitter to remember that words and rhetoric have real life consequences, and to stand up, condemn the violence and help #StopAsianHate.

There is a reason responsible politicians do not use the term Wuhan or Chinese virus. Words from politicians are weapons for the idiots and the bigots of the world. My heart goes out to Atlanta and AAPI community.

A few other Latino politicians, including Sen. Julia Salazar, Reps. Ritchie Torres and Nydia Velazquez, commented on the shootings, speaking out against targeted racial violence and sending their sincere condolences to the victim’s family members and the Asian American community at large.

This is despicable. Our hearts go out to the victims’ families & the entire Asian-American community reeling from the rise in hate crimes across the country. We must continue to stand with our AAPI neighbors & condemn racism in all forms. #StopAsianHate https://t.co/rnP7nxy3Xt

The anger and unrest that Asian Americans, especially women, are feeling right now is visceral and cannot be ignored. For change to occur, everyone needs to listen to those most impacted by this hatred and senseless violence.

Many Twitter users called attention to the history of violence towards Asian women in the massage parlor industry that are typically doing sex work. One user drew the connection between sexualized violence that Asian women face and how it’s intertwined with violence against those in the sex trade.

It matters that the women killed tonight were sex workers and likely immigrants and poor. We need to have class in this conversation because all racism is an ideological expression of a materially oppressive relationship

“That violence has been so deeply shaped by American imperial wars in Asia,” they wrote.

In response to the shootings, Stop AAPI Hate released the following statement:

“The reported shootings of multiple Asian American women today in Atlanta is an unspeakable tragedy — for the families of the victims first and foremost, but also for the Asian American community, which has been reeling from high levels of racist attacks over the course of the past year.”

The organization stressed that this latest attack will only serve to worsen the fear and anxiety that the community is already experiencing. They cited the nearly 3,800 reports of hate incidents across the U.S that they’ve received since March 2020.

“Not enough has been done to protect Asian Americans from heightened levels of hate, discrimination and violence. Concrete action must be taken now. Anything else is unacceptable,” they continued.

To conclude, Stop AAPI Hate expressed their condolences to the loved ones of the victims and to the Atlanta community of Asian Americans. Many other organizations, advocates and politicians sent out messages of empathy, frustration, and condemnation, with an emphasis on the pressing need for an end to this ongoing violence.