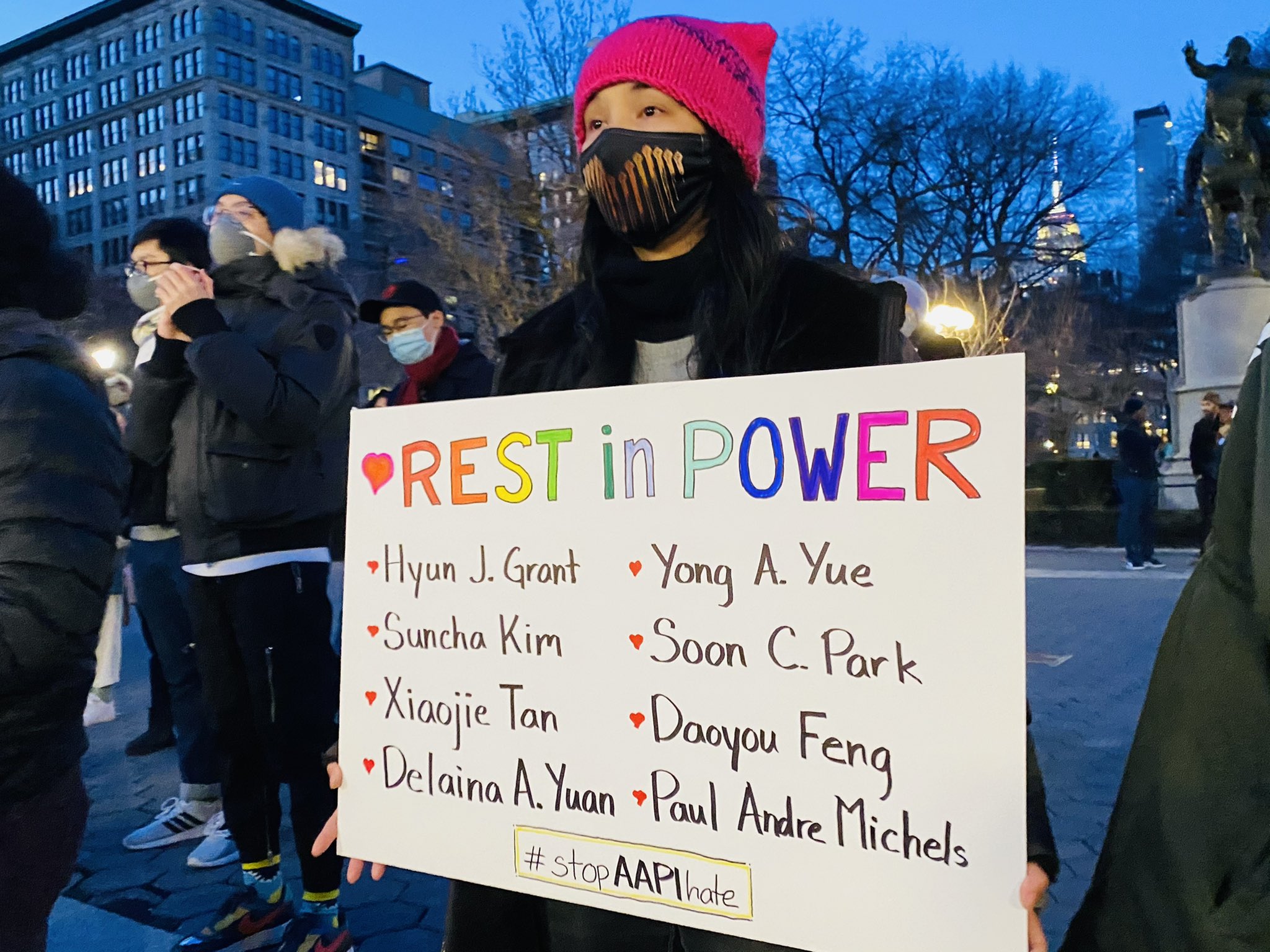 Hundreds of thousands hit the streets over the weekend to show out against AAPI hate. Photo: Twitter

The U.S. rallies coast to coast against AAPI hate

In addition to hundreds of thousands hitting the streets, millions have been raised to support the families of the victims of the Atlanta spa shootings.

On Saturday, March 20, citizens across the U.S. participated in rallies with the intention of condemning the brutal attacks against the Asian American and Pacific Islander (AAPI) community, after a shooting rampage in Atlanta left eight people dead.

San Gabriel Valley is coming out big tonight for the victims of the Atlanta shootings. I’d estimate 1000+ btw 2 vigils.

People feeling the loss hard in this swath of LA Cty, which has 1 of the country’s largest concentrations of Asian residents. 10 cities have Asian majorities. pic.twitter.com/mPyTdg8YsS

The vigils were for mourning the losses, but the rallies were for demanding justice.

While many non-Asian American citizens are just waking up to the rampant anti-AAPI sentiments that thrive in this country, this is nothing new for Asian Americans, especially immigrants.

From the Chinese Exclusion Act of 1882, the Japanese internment camps established by President Roosevelt from 1942 to 1945, and the murder of Vincent Chin in June 1982, the states have always been fertile breeding ground for anti-Asian racism.

For a long time, most Asian Americans have stayed silent about much of the discrimination and hate they face on a daily basis, but current events have led to an outrage that demands to be spoken about.

From San Francisco to Pittsburgh and many points in between, men, women and even children, marched in solidarity with Asians across the country, denouncing the hate crimes, and demanding justice.

Ann Johns, an attendee at a rally in Atlanta, told NBC News that she’s dealt with “words and looks and stuff” her whole life.

“My family doesn't want me to go anywhere by myself,” Johns said.

In San Antonio, Texas, former Mayor Juliàn Castro told demonstrators that the U.S. has an “imperfect” history that needs to be thoroughly examined.

Castro, who was also the former HUD Secretary in the Obama administration, knew that he was preaching to the choir when he spoke of the history of racism.

“For generations, Asian Americans have been discriminated against. I don't have to tell that to anybody in this crowd,” he said.

Sandra Oh, Golden Globe-winning actress, most recognized for her role in the drama Grey’s Anatomy, marched in the Pittsburgh rally, telling protesters that she is “proud to be Asian,” and that “we belong here.”

“i am proud to be asian, we belong here.” - sandra oh pic.twitter.com/8vIvhBG0pD

“For many of us in our community, this is the first time we are able to voice our fear and anger, and I am so grateful for everyone willing to listen,” Oh said.

A protester in the Logan Square neighborhood of Chicago, Dai Quing told NBC Chicago that they came to not only show support for the victims of last week’s shootings, but to prevent such attacks from happening again.

“I come here, I think of not only for me but also for my next generation. I think they should have the same opportunity and be respected equal,” said Quing.

The solidarity and support continued to pour into the hearts of the families of the victims, as well as their wallets. Multiple GoFundMe pages were set up to raise money for funeral costs, living situations, and more.

In memory of Hyun Jung Grant, Randy Park, her 22-year-old son, set up a page to crowdfund, writing a poignant letter explaining how his mother worked long hours at the spa and was often away from home for days or weeks at a time. He described his mother as “one of my best friends,” saying that she had a major influence on him and his brother.

The son of a victim in the Atlanta rampage tells Daily Beast about his mom:

— She loved dancing & sushi
— She taught elementary school in Korea before coming to the US
— “She was a single mother of two kids who dedicated her whole life to raising them."https://t.co/IYcLwK0HaX

Randy said that he has no family in the states; all their family members are living in South Korea, and unable to come here.

“I have no time to grieve for long. I will need to figure out the living situation for my brother and I for the next few months, possibly a year,” Park wrote.

In an update, Park expressed gratitude to the more than 60,000 people who posted donations on the page.

"I don't know how any word I write here will ever convey how grateful and blessed I am to receive this much support," he wrote.

Park told USA TODAY that when he found out that his mother died, he drove 30 minutes to Gold Spa, to see and hear everything firsthand. Before that day, he’d never actually seen his mother’s workplace.

Park said his mom was a teenager at heart. She loved hanging out with friends, dancing, listening to Dutch DJ Tiësto and singing Karaoke.

"This doesn't represent even a fragment of how I feel. My mother can rest easy knowing I have the support of the world with me,” Park wrote.