Leger Fernandez was born in Las Vegas, New Mexico. Her mother was a bilingual educator and her father, Ray Leger, served as a member of the New Mexico Senate.  Courtesy Teresa Legend Fernandez/Depositphoto

“Show Up And Get Involved,” that’s responsibility for Rep. Teresa Leger Fernandez

From increasing voter access among Indigenous communities and fighting climate inequities, New Mexico’s new Rep. has always been on the move.

One hundred years ago, Adelina Otero-Warren, a suffragist from New Mexico, was the first Latina to run for Congress. After successfully lobbying to get New Mexico to vote in favor of the 19th Amendment, allowing women to exercise their right to vote, she ran for Congress in her district.

Otero didn’t win, but 100 years later Rep. Teresa Leger Fernandez did. She is the first Latina to represent her northern New Mexico District in Congress.

As she looked outside her window at snow-capped mountains, she spoke about her district’s beauty but also about what it needed. “My district is beautiful but also has a lot of poverty,” she said.

The poverty she’s spent her life trying to combat — whether through decades of work at her social impact law firm, as she calls it, or fighting voter suppression among Native Americans and Latinos in New Mexico. In the November general election, Leger Fernandez defeated Republican nominee Alexis Johnson. She assumed office on January 3, 2021. In the photo: Teresa Leger Fernandez in front of her office in Congress, surrounded by her children.
Decades of Dedication

“It’s only if we have that infrastructure in those businesses that our communities can thrive,” Leger Fernandez said, “From building schools to businesses and rural health clinics, to broadband.”

It’s efforts like these that have helped New Mexico rank 17th in the nation’s infrastructure, yet the state ranks 48th in opportunity.

Leger Fernandez said she’s also worked on cultural preservation so that the stories of historical figures such as Adeline Otero aren’t forgotten. For her, we must remember our history and tell our stories.

This she learned from her parents.

They were bilingual education pioneers and wrote the law that required Indigenous languages like Navajo and Apache, as well as Spanish, to be taught in schools so future generations wouldn’t forget them. 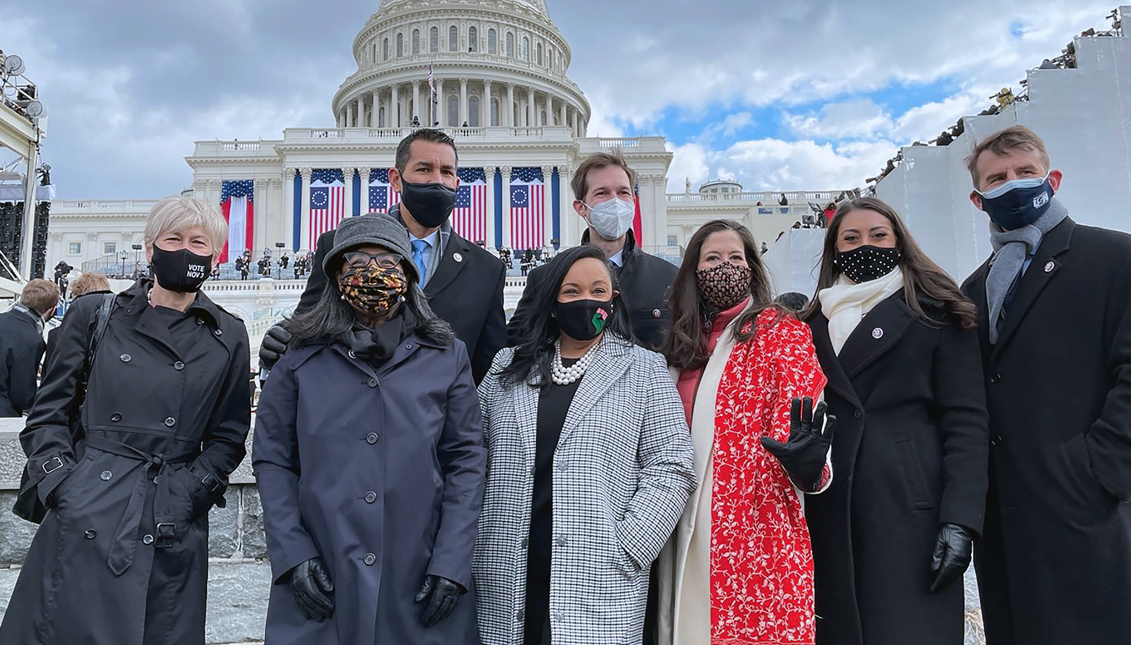 “I represent a majority district of Latinos and Native Americans, but then we have every other diversity of ethnicity — Black Americans, Asian— just a wonderful mix [...] We celebrate Native American Feast Days and Latino Fiestas, and Rodeos, you know. We do it all here,” said Leger Fernandez.

While diverse, each community expects her to represent them on the critical issues at the Capitol.

Largely, they’re the same issues that are important to Latino communities across the country, like healthcare, immigration, and economic opportunity.

“In many ways, many of our issues overlap. And that’s what they expect me to do, is represent them with deep knowledge of these communities, because I have worked for 30 years making things happen in these communities, so I need to take that knowledge and take it to D.C,” she said. Former Rep. Ben Ray Luján also made headlines when he ran for the Senate — and won — and Leger Fernandez herself became the first Latina to represent her district.

Then, in mid-December, Rep. Deb Haaland put New Mexico in the spotlight again after Biden selected her to run the Interior Department.

“It is wonderful to be joined by such a diverse leadership. What it does is it goes back to the fact that New Mexico has been building its Latino, Indigenous, Latina leadership. And now it’s culminated,” Leger Fernandez said.

It is wonderful to be joined by such a diverse leadership. What it does is it goes back to the fact that New Mexico has been building its Latino, Indigenous, Latina leadership. And now it’s culminated,” Leger Fernandez said.

If running for office isn’t the goal, Leger Fernandez said merely getting involved in the political process is a win for underrepresented communities.

“Show up and march in those protests, or show up and get involved in whatever it is that pulls you… It is a joyful thing. You talk to them, and they’ll have a passion inside that is beautiful to watch because it’s a fire that gives them strength, and it also gives them purpose and determination,” she said.

A month full of history

It’s no doubt Rep. Leger Fernandez’s first month was historic — for many reasons. With a range of emotions, she described these to AL DÍA.

“So getting sworn-in was quite joyous and a moment where you realize that you had truly this awesome responsibility to represent your communities, and that was real,” she said. “When this sinks in, it is truly your turning point, right? Where you walked over that threshold, you are now in that place of responsibility.”

But once past that threshold, she witnessed the unthinkable at the Capitol.

“A few days later, we had the insurrection, and that emotion — the strongest emotion there was of anger. But anger in the way a momma bear would be angry if her baby cubs were attacked,” she said.

She said it was a love for democracy that made her feel this way — as imperfect as it is — because those who stormed the Capitol were white supremacists who had been egged on by former President Donald Trump, who had been attacking Latinx immigrants since he assumed office.

“Then we got to the impeachment, and that was solemn because that was recognizing that we could not allow a president to incite insurrection and let it stand. That we can not begin to heal and to do the important work that this nation needs if we say it doesn’t matter,” she said.

“It was pure joy and relief,” Leger Fernandez said.“I was whistling, I was doing the kind of screams and yells that they do in some of the communities here which are very high pitched, because I felt like my clapping, and my cries of happiness and joy, that I needed to represent millions, and thousands because they couldn’t be in that Mall. So I was trying to channel everybody’s joy and excitement.” The joy of her people and the love of their land in New Mexico is what Leger Fernandez has been advocating for not only in terms of infrastructure and opportunity but also for its future well-being.

However, she noted that if the nation doesn’t adequately address climate change, New Mexico will not be a place where her people can live.

“And that takes collective action. It takes us all working together,” she said.

That collective effort she believes must go towards fighting climate change. If left unchecked, it will not only economically hurt people of color the most but also health-wise.

“Those hurt most right now are our Latino and BIPOC communities who are working under the shadow of the fossil fuel industry who have labored under the clouds of pesticide,” said Leger Fernandez.

She referenced bills she will be taking up as her term proceeds, ranging from tackling the methane being spewed into the air and building the renewable energy grid.

Equity on day One

Of course, as most politicians amid the health crisis, addressing the pandemic and its numerous economic fallouts is the first order of duty.

Besides that, the congresswoman listed more immediate actions she’s working on, including something she’s worked on her whole life.

“I am a co-sponsor of H.R. 1. It’s called the For the People Act. It’s electoral campaign finance reform. It’s been something I’ve worked on for my entire life. I’m on the committee that will be working on that bill; I am going to be talking about that everywhere because Democracy is the key to getting all of the rest of this stuff done,” she said.

The bill would be a win for campaign finance reform and increasing access and participation in the electoral system.

As she explained the ins and outs of that bill, Rep. Leger Fernandez smiled.

“For me, my work has always given me joy,” she said.