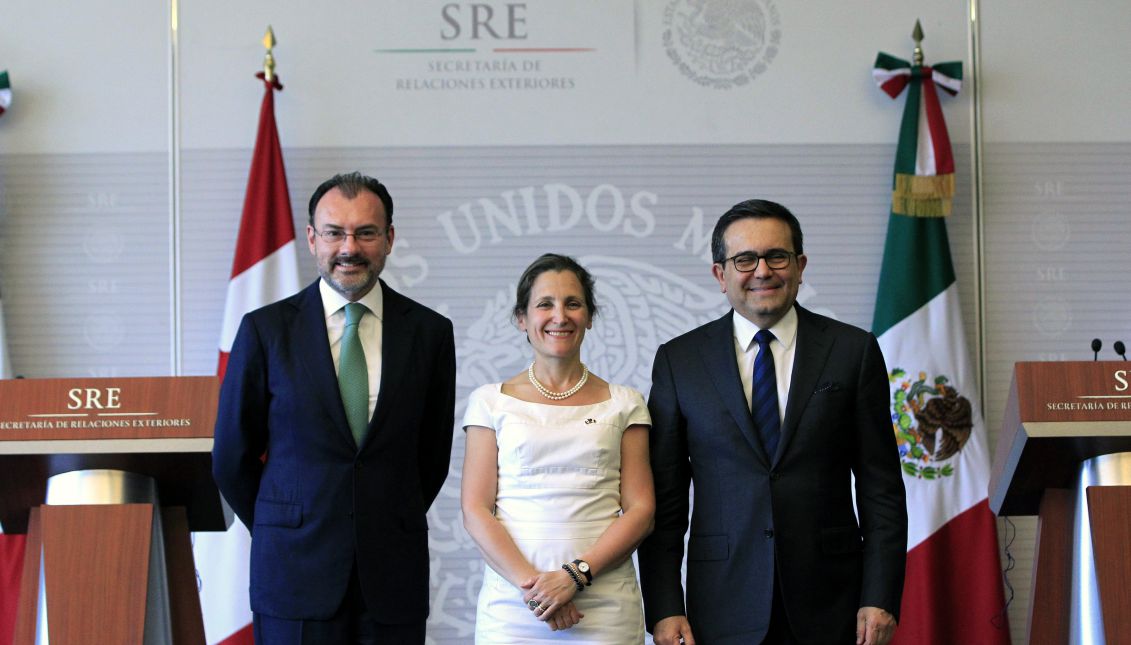 Mexico: Cancelling NAFTA would be lost opportunity for 3 countries

Mexican Foreign Minister Luis Videgaray said Tuesday that cancelling the North Atlantic Free Trade Agreement would be a "lost opportunity" for the US, Canada…

Mexican Foreign Minister Luis Videgaray said Tuesday that cancelling the North Atlantic Free Trade Agreement would be a "lost opportunity" for the US, Canada and Mexico, but he reiterated that his country is "ready" for negotiations to update it.

A potential cancellation of the treaty would be "above all, a lost opportunity ... (because) NAFTA is good for the three economies, although there is no doubt it can be improved," said the minister in response to reporters' questions.

"Mexico is ready and we have one of the best negotiating teams in the world," he said during a message to the media along with Canadian Foreign Minister Chrystia Freeland and Mexican Economy Secretary Ildefonso Guajardo.

Videgaray acknowledged that cancelling NAFTA, which was inaugurated in 1994, would produce a negative scenario for Mexico.

"We would have a problem in the near term," but as a region "we would lose the opportunity to create what might be the most competitive and best growth in recent decades," he said.

Last Thursday, the US government sent a letter to Congress informing lawmakers that it intended to renegotiate NAFTA, thus opening a 90-day consultation period with legislators and industry groups before those talks.

She said that the Canadian government also sees NAFTA as "very successful," since it had improved competitiveness and prosperity in the region.

US President Donald Trump has taken the stance that NAFTA hurts the economy of his country and, therefore, he has called for renegotiating a "better deal" for Washington.

Freeland said that Canada was quite ready to sit down and talk about "modernizing" NAFTA, noting that in the 24 years the treaty has been in effect there have been other modifications and that is "normal and healthy."

She said that she had traveled to Mexico to deepen the bilateral relationship and Tuesday afternoon she was scheduled to meet privately with Mexican President Enrique Peña Nieto.