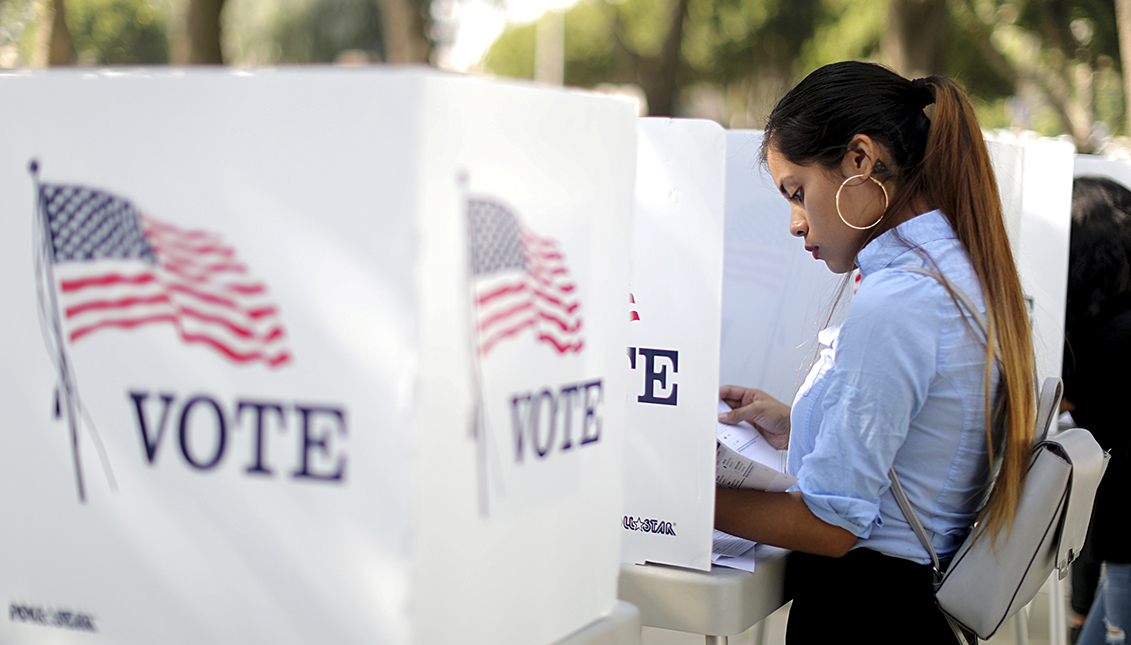 Destiny Martinez, 18, votes for the first time at the Power California early voting event and festival for students from the Los Angeles Unified School District on Oct. 24, 2018 in Norwalk, California. Photo: Getty Images.

Perspective: Europe still doesn't understand the enigma of the Latino vote in the U.S.

What if all Latinx voters were Democrats, what if Biden wins, and what if he doesn't? Is there a wild card in this political analysis?

When you Google the biggest newspapers in Spain about American elections, you are invaded by a state of confusion only Groucho Marx would understand. It gets even worse when considering the Latinx vote.

Analyzing a phenomenon like the Latinx vote in the U.S. is complicated even for a seasoned political analyst — in 2016, most polls gave Hillary Clinton the victory and it didn't happen, even with a majority of Latino votes. Now, Spanish polls are more split. Some days, the victory is Trump's and others it is Biden's, but above all, they link the Democrat's victory to the Latinx vote, which, in the face of constant generalizations, seems to detest Trump en masse and love, or at least accept, Joe Biden.

Few media outlets have approached the phenomenon of the Latinx vote from a broad perspective, understanding Hispanics as a plural and very diverse set of nationalities and life experiences, and even treating potential voters and supporters of Trump, including Latinos for Trump, as a strange group of freaks.

In a curious twist of the omelette (the Spanish one), a few days ago, the special envoy of the ABC newspaper published the sad harassment experienced by those Latinx who "bravely" support Trump, beginning with the story of an Arizona couple who were threatened because of their Republican adherence and how the president came to their defense. The headline read: "The Price of Being Hispanic and Supporting Donald Trump."

Others, like El Periódico, address the broad Latinx electorate as the sleeping giant that is finally waking up, while newspapers like El País and El Diario.es try to unravel the mystery of the Latino vote and the usual topics that are on the minds of Spaniards, such as whether migration is the main concern of most Hispanics — or whether all or many of them are undocumented — when 75%t of the Latinx electorate, the newspaper cites, was born in the country.

"The immigration issue worries us and bothers us because we see our pasts and we see the separation of families, the treatment they receive. But the most important issues are the economy, education, health, the environment, and, yes, immigration reform later. Because almost 80% of us have an acquaintance or family member who arrived undocumented," declared the founder of Mi Familia Vota, Ben Monterroso, to the Spanish media.

Sometimes we wake up to Biden's successful campaign among Latinx voters, the next day Biden himself worries that he is losing their trust. Two days later, the drama spreads, and it turns out that it is mostly Latinx women who are Democrats and the men, especially those fleeing socialist countries, who are supporting Trump en masse.

By election time, the only thing known, as Socrates said, is that no one knows anything. Except that the 62 million Latinx individuals in the country, half of whom will vote — and that is assuming the world is perfect and the campaign to get out and vote has had its effect — are so different from one other and moved by so many things, especially in a context of a pandemic, and growing economic crisis, that reducing everything to red and blue is a farce.