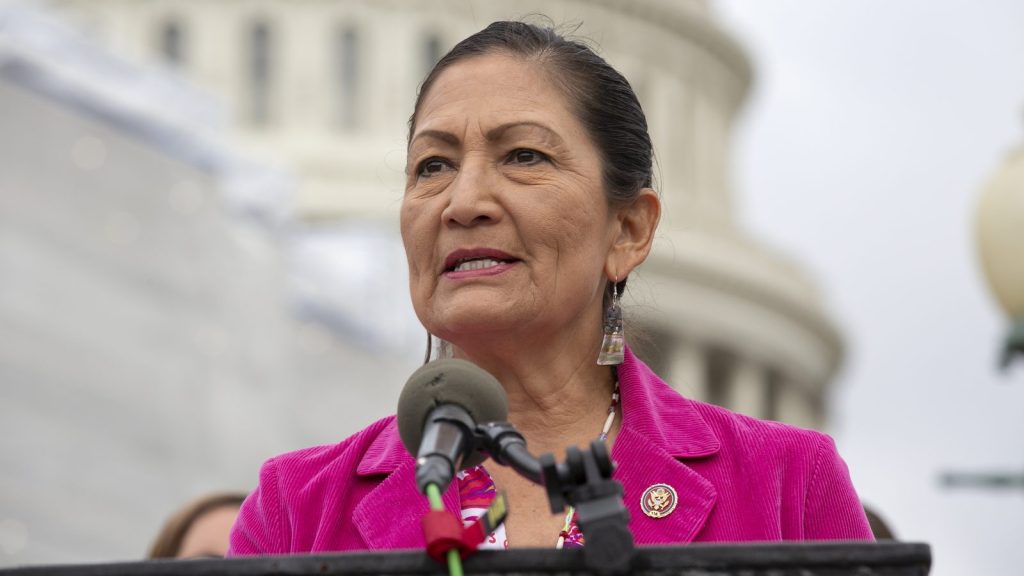 After a tremendous push for Biden to select the first Native American for his cabinet, Rep. Haaland is a historic first.

President-elect Joe Biden has nominated progressive Democratic Rep. Deb Haaland (D-NM) to serve as Interior Secretary, a historic pick, as she would be the first Native American to hold the position in the department’s history.

Born in the Navajo Nation in Arizona, and an enrolled member of the Pueblo Laguna tribe, Haaland would lead the department that oversees the nation’s vast natural resources, including tribal lands. Having just won reelection for a second term, if confirmed her cabinet nomination will lessen the razor-thin majority Democrats currently hold in the House until her seat is filled.

Over the course of his presidential campaign, Biden vowed he would ensure that Indigenous tribes have a “seat at the table at the highest levels of the federal government.” At last, he has delivered on the promise, and though the cabinet still stands at only one potential Indigenous member, it’s a unifying decision for the Democratic party.

Progressives, environmentalists, Indigenous groups, and more moderate Democrats continuously lobbied for Biden to deliver his promise by nominating Haaland, and the movement garnered support from the highest positions of House leadership.

Support was further solidified when House speaker Nancy Pelosi officially announced her support for Biden to choose another House Democrat out of Congress and into his cabinet, despite the diminished majority she will end up with in the new year.

Pelosi released a statement in support, writing: “Congresswoman Haaland knows the territory, and if she is the President-elect’s choice for Interior Secretary, then he will have made an excellent choice.”

Biden made his announcement shortly after.

The selection could mark a turning point in the U.S.’s hundreds of years-long history with Indigenous peoples, riddled with actions at their expense.

It also marks a shift in the 171-year-old history of the Interior, and it's distressing relationship with hundreds of federally-recognized tribes.

The representation in the president’s cabinet is long overdue, especially when considering what the department deals with often intersects with Indigenous People and their lands.

The Interior manages about one-fifth of the nation’s lands, including over 109 million acres of wilderness and 422 national parks. It also manages wildlife refuges, mitigates the  decline of  endangered species, and manages water projects integral to cities like Los Angeles and Las Vegas.

The department will play a large role in Biden’s plan to battle the climate crisis, as he has pledged to halt all new oil and gas drilling on public lands and waters.

It is also responsible for managing most of the land controlled by the federal government and for administering programs concerning Indigenous communities. Up to this point the agency’s reputation has been one of abandoning its responsibilities to tribes, ranging from evictions from ancestral lands, to abusing and breaking treaties.

“In 4 years, Trump failed Indian Country & only broke more promises. It was exacerbated by the Administration’s failure to take this #pandemic seriously. Looking forward to turning the page on this dark chapter,” Haaland wrote on Twitter, minutes before Biden’s announcement.

It’s a huge department to oversee, but supporters have long been sure that Haaland is the strongest candidate for the position. Many voiced their support of Biden’s selection on Twitter.

“This is a big deal,” wrote Rep. Alexandria Ocasio-Cortez (D-NY) on the historic appointment.

This is a big deal.

Historic appointment. A visionary Native woman in charge of federal lands. Unequivocally progressive. Green New Deal champion. Exquisitely experienced.@RepDebHaaland sister, you are going to do such a great job. I am so proud of you and the movement.

Rep. Ben Ray Luján (D-NM), the senator-elect from Haaland’s state also released a statement on her nomination, emphasizing her experience for the cabinet position.

“The Congresswoman has a proven record of standing up for our environment, creating opportunities for Americans to enjoy the great outdoors, and fighting to ensure that America keeps its commitments. As Chair of the Subcommittee on National Parks, Forests and Public Lands, she held the Trump administration accountable for its efforts to undermine public lands and environmental protections,” Luján wrote.

Today’s announcement is more than making history. If confirmed, Congresswoman Haaland will bring progressive action and overdue representation to the highest levels of the White House.