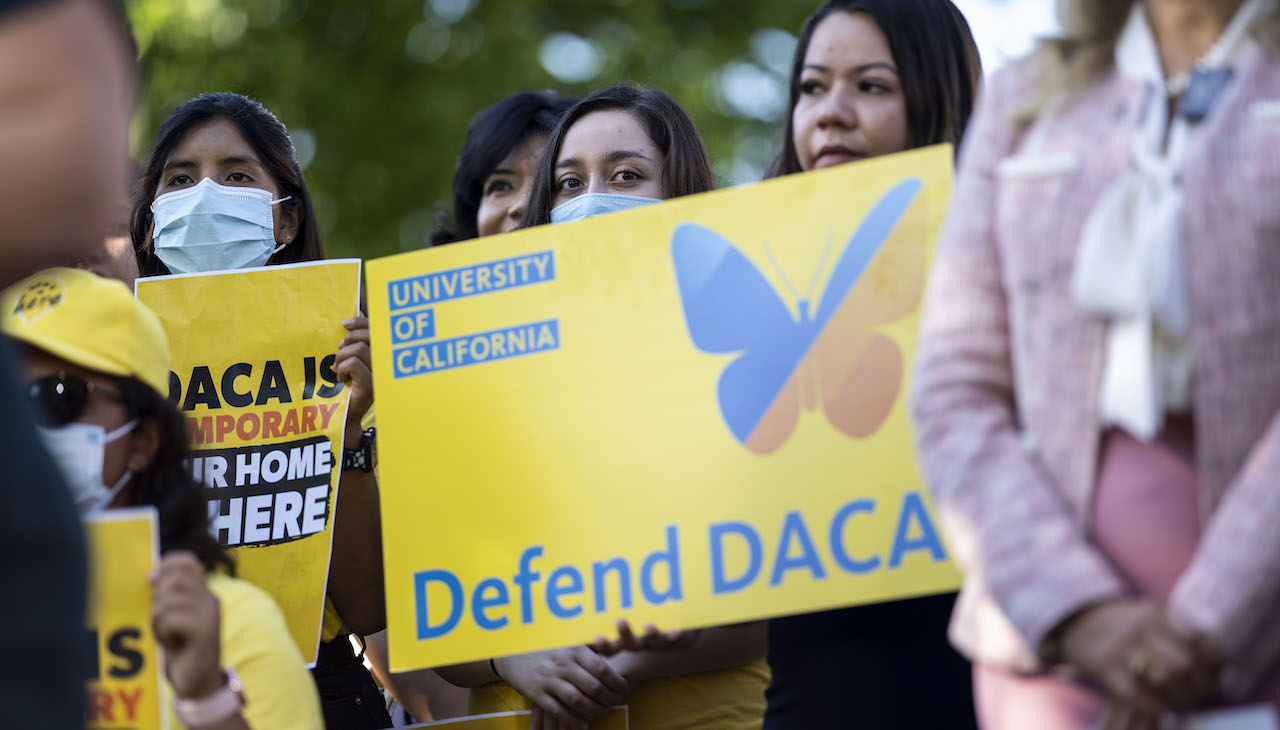 At 10-year mark of DACA, advocates and officials celebrate, but also demand action

The immigration policy enacted by the Obama administration has given hundreds of thousands a future in the U.S., but its biggest fights are ahead.

On the morning of June 15, 2022, a large group of immigration advocates and members of Congress from both parties gathered in front of the U.S. Capitol Building for a press conference to commemorate 10 years of the Deferred Action for Childhood Arrivals policy, otherwise known as DACA.

The policy, implemented under the Obama administration, gave undocumented children brought to the U.S. by their parents a renewable two-year deferral from deportation, and granted them access to a work permit in the U.S.

Since its implementation, estimates put the number of DACA recipients — also known as DREAMers, named for a separate bill that would give them a pathway to citizenship, but hasn’t passed — at between 690,000 and 800,000 people.

The speakers at the press conference on June 15, used the occasion to celebrate the achievements of the policy and the impact it’s had for hundreds of thousands across the country, but looked to the future with continued uncertainty.

“We have proven that DACA is important, that DACA benefits all of us, and that when we can organize, we can win big,” said Greisa Rosas Martínez, executive director of United We Dream.

Speaking of organizing, it’s been a constant since 2012 before DACA was implemented, but really ramped up in 2017, as the Trump administration announced it was ending DACA. Several lawsuits followed against the administration and one made its way all the way to the Supreme Court in 2020.

The Court ruled against the administration 5-4 and upheld DACA, but the legal attacks remain constant to this day. Currently, lawsuits filed have virtually frozen applications to the program, and only a quarter of 2022 high school graduates can even apply in the first place.

“They want to kill the DACA program,” said Rosas Martínez.

With the policy on such shaky legal ground these days, it will be up to both the current administration and Congress to provide stability.

For the Biden administration, Senator Bob Menendez called on it to use many of the same executive powers the Obama administration did when implementing the program. Those powers in 2022 would be to expand DACA eligibility, defending the move in court, and shielding DACA recipients from deportation in the event the courts strike down the policy.

“We’re only going forward, not going back,” Menendez told the crowd.

As for what Congress can do, Senator Dick Durbin said it “must pass immigration reform.” It’s a discussion he’s been involved in since he and Republican Senator Orrin Hatch introduced the first DREAM Act back in 2001. Then and to this day, it remains unable to pass both chambers of Congress.

On Wednesday, Durbin discussed the importance of the DREAM Act once again, but there are other potential reform ideas, especially from the other side of the aisle.

One of them comes from Florida Rep. María Elvira Salazar’s Dignity Act. The plan, which she introduced in February 2022, would allow immigrants that enter the U.S. illegally to stay and work for up to 10 years at a cost of $1,000 a year. They could then sign up for another five-year program that would provide a pathway to citizenship.

DREAMers would be immediately eligible for the five-year program.

“I believe DREAMers are Americans and there’s no other way to put it,” said Salazar. “They make my city, and this country better.”

She also harkened back to the presidency of Ronald Reagan for what she said was the last time any major immigration reform was passed. Since then, she said, it’s been broken.

“You guys are victims of that broken system,” she told the crowd. “And it’s time for us, the United States Congress, to fix that.”

Also to speak at the press conference on Wednesday morning were Senators Alex Padilla and Catherine Cortez Masto, Reps. Dan Newhouse and Raul Ruiz, and a number of other immigration reform advocates from various organizations from across the U.S.