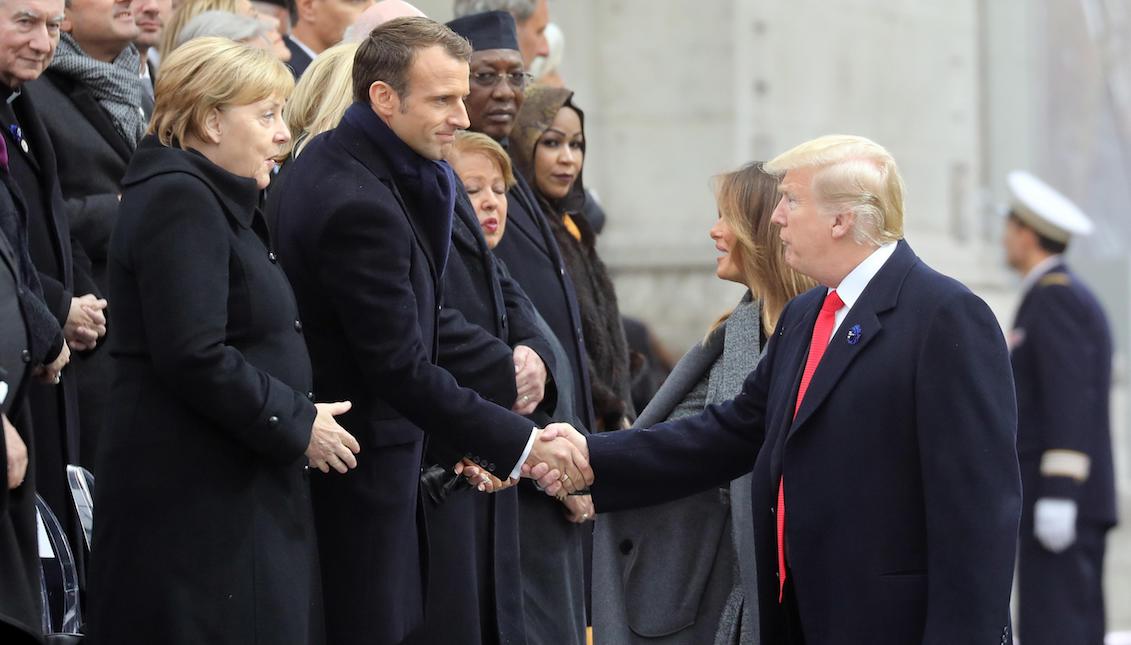 U.S. President Donald J. Trump (R) shakes hands with French President Emmanuel Macron as he arrives with his wife, U.S. First Lady Melania Trump, to attend an international ceremony for the 100th anniversary of the armistice of the First World War of…

The U.S. president and his French counterpart have reached a point of no return that could further distance the United States from international politics.

"I don’t do politics through Twitter," has been the habitual response of French President Emmanuel Macron to the attacks of his American counterpart through Twitter.

President Donald Trump staged a digital tantrum again, after his participation last week in the commemorative events of the First World War in Paris made him look as a second-class president.

Trump was not only attacked by the loud European rejection of his international policies, but he was mocked by the media coverage of his participation, where he was painted as disrespectful for having suspended one of the events because of the rain.

The American president decided to attack the French leader on social media, writing:

Emmanuel Macron suggests building its own army to protect Europe against the U.S., China and Russia. But it was Germany in World Wars One & Two - How did that work out for France? They were starting to learn German in Paris before the U.S. came along. Pay for NATO or not!

While the French president has insisted on forming a European army separate from the North Atlantic Treaty Organization - a post-World War II alliance that kept Russia's aggressiveness at bay - it was Trump's decision to withdraw from the INF Treaty (Intermediate-Range Nuclear Forces) which prompted France to insist on "ceasing to depend on the United States," the Business Insider explained.

During the commemorative events of November 6, Macron said: "we must protect ourselves from China, Russia, and even the United States," referring, as he later clarified, to "cybercrime" and the creation of domestic defense industries that "don’t need to buy or invest in American arms."

As expected, the U.S. president took the comment as a personal insult.

Trump then resorted to mocking the approval rating of the French president and unemployment in France, even cataloging the country as a “true nationalist” one.

The problem is that Emmanuel suffers from a very low Approval Rating in France, 26%, and an unemployment rate of almost 10%. He was just trying to get onto another subject. By the way, there is no country more Nationalist than France, very proud people-and rightfully so!........

Without taking into account the importance of the date on which he wrote his comments, (November 13 is a critical date for the spirit of the French nation after the attacks of 2015 in Paris), Trump provoked a sharp response from the French president.

In an interview from the emblematic aircraft carrier Charles de Gaulle, Macron re-evaluated the relationship between France and the United States and said that "at every moment of our history, we are allies, so between allies, respect is due,” Macron told the French news network TF1.

"The United States is our historic ally and will continue to be," he added. "It’s the ally with which we take all the risks, with which we carry out the most complicated operations. But being an ally doesn’t mean being a vassal state.”

This last comments crossover between the two presidents radically changes the tone in which both leaders had been leading their relationship.

After Trump openly supported Macron's opponent in the 2017 presidential campaign - far-right candidate Marine Le Pen - the new French president took the lead to try to form a solid nexus with the United States during his administration.

Between official visits from both sides, everything seemed to go smoothly until Trump decided to destroy the little trust they had.

His antagonism to multilateralism and to fundamental international agreements, such as the Paris Climate Agreement, led Macron to take a more radical stance.

However, the last puerile responses of the U.S. president (who continued to attack even French wine), warn that his position regarding a global economic war hasn’t changed, nor has his basic knowledge of diplomacy.

For a country that has the historical tradition of respect deeply rooted, Trump's lack of delicacy towards France has been the straw that broke the camel's back.

"Yesterday was November 13. We commemorated the murder of 130 compatriots three years ago in Paris and Saint-Denis, and I will respond in English: 'common decency' would have been desirable," said French government spokesman Benjamin Griveaux in the press conference after the Council of Ministers on Wednesday.