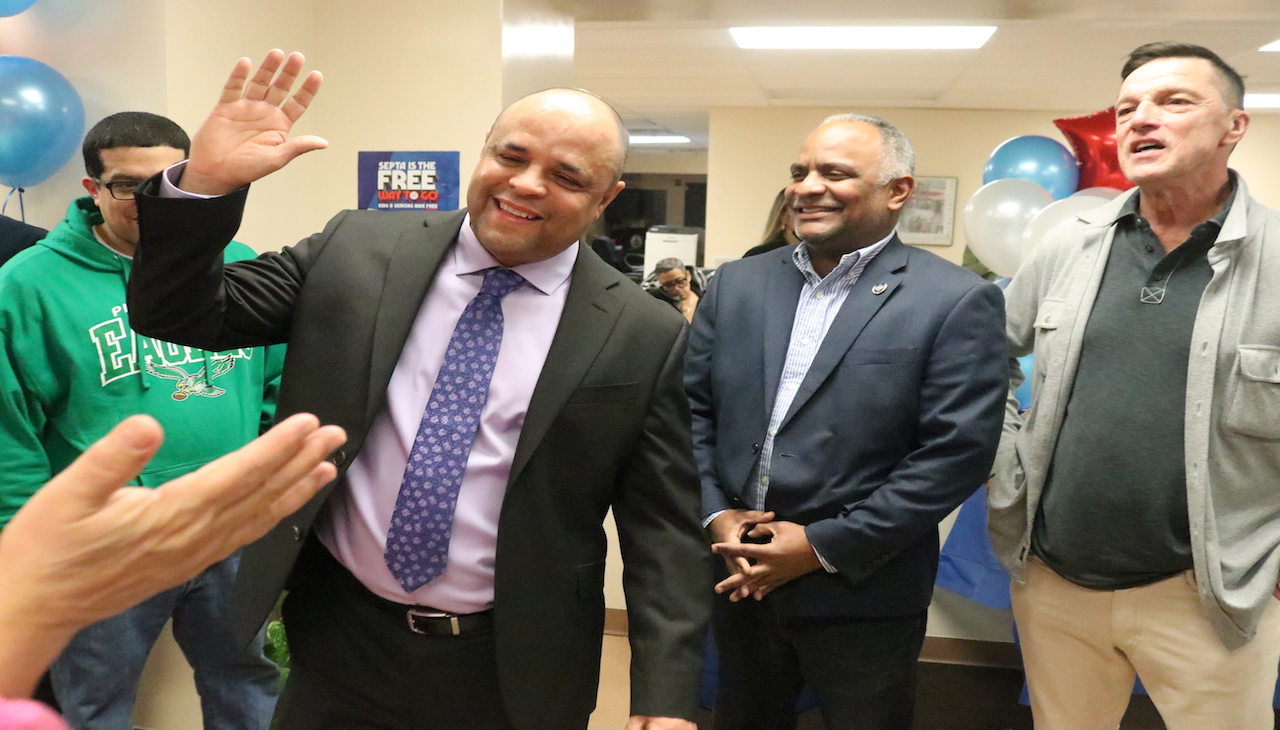 Giral office is open for business, and he’s eager to get to work

It was a momentous evening for newly-minted State Representative José Giral as he officially opened his District Office doors to constituents on Thursday, Jan. 5, located at his Kensington headquarters, in North Philly.

Giral, elected to represent Pennsylvania’s 180th District, held his first event as a state official, following a tumultuous swearing-in ceremony in Harrisburg, where the House scrambled to nominate and install a new Speaker.

But these events are an up-close opportunity for Giral’s constituents to meet their new representative, as well as give him an opportunity to restate his priorities ahead of his freshman term.

Attending the event were some of Harrisburg’s Latino entourage —- including Ángel Cruz, the former State Rep., and Rep. Danilo Burgos —- both Democrats who have long represented North Philadelphia’s primarily Latino districts.

He was introduced by longtime incumbent and predecessor Cruz, who said he “hadn’t written a speech for [José Giral],” but that Giral, also an aide to Cruz for many years, “knows how to do this business, and you guys all know him.”

Responding to questions posed by AL DÍA, Cruz — having served the same district for 22 years without opposition — said that while he was looking forward to his successor’s term, he also wanted to issue a word of caution.

“The only one thing that’s [José Giral’s] problem that I’m trying to change, he doesn’t see the wrong in [people],” Cruz said. “He wants to keep everybody happy, and I told him ‘I’ll tell you this in the smallest sense that I can: not even God, Christ could keep anybody happy because he had one that sold him at the end.”

Cruz, who is currently evaluating the next steps of his career, said he would be stepping back momentarily due to health issues that arose late last year.

He’d initially eyed the vacancy left by María Quiñones Sánchez for the District 7 seat in City Council, and told AL DÍA in September he was confident in his position, but Ward leaders in the district ultimately endorsed Quetcy Lozada, who’ll need to prepare for another race in May.

Cruz confirmed he would await medical results in the coming weeks before he mulls another bid.

Giral in turn, “can’t wait to get to work. There’s a lot of work to be done in the city, in the state.”

Teary-eyed as he took in the moment, Giral addressed the crowd of constituents that surrounded him, in a moment that felt as if it was decades in the making, but happening at just the right moment.

“I want to thank everybody, even the ones who are talking in the back,” the rep told the crowd.

The bulk of his speech was appreciation for members of his staff, Cruz, ward leaders, his supporters — who he named — and the media, referring to reporters present at the event.

Giral also thanked his son, Thomas Giral, who will serve as a Communications liaison for the his Philly office.

“It’s exciting, very emotional,” Giral said in an interview, and added that he “can’t wait to get to work. There’s a lot of work to be done in the city and the state.”

He listed minimum wage as a top priority for state-level work, and as for his District, “Kensington Avenue is going to be my pet project. I’m going to try to do everything I can to revitalize Kensington Avenue,” he said.

“I’m going to try to bring businesses back there, create jobs (...) We have two issues there: affordable housing for everyone, because we live in a poor district, disenfranchised, I should say,” the lawmaker added when talking about Kensington, which is routinely at the forefront of violent news coverage.

Giral also laid out a preliminary proposal to find “emergency housing” for the homeless population in the area, as part of his initial thoughts, though he declined to share in full before he sat with the incoming Governor.

“I got a lot under my plate,” he told AL DÍA, while underscoring his term would mean new beginnings for District 180, as he looks to establish his own legacy.

Earlier this week, Giral was sworn-in amid an unexpectedly chaotic first day in the House, when Berks County Rep. Mark Rizzo was nominated and voted in as Speaker, securing full Democratic support, with 12 Republicans breaking ranks.

But there’s a bit of history beneath the earth for Pennsylvania’s Latino population, who adds new faces to the House, which Berks County Rep. Manuel Guzman called a starting point for Latinos in local politics in a speech in November.

The newcomers are Rep. Johanny Cepeda-Freytiz of Berks County, and they will be joining a veteran group of lawmakers, including Dominican Rep. Danilo Burgos, Puerto Rican Rep. Manny Guzman and Montgomery County’s Ben Sanchez.