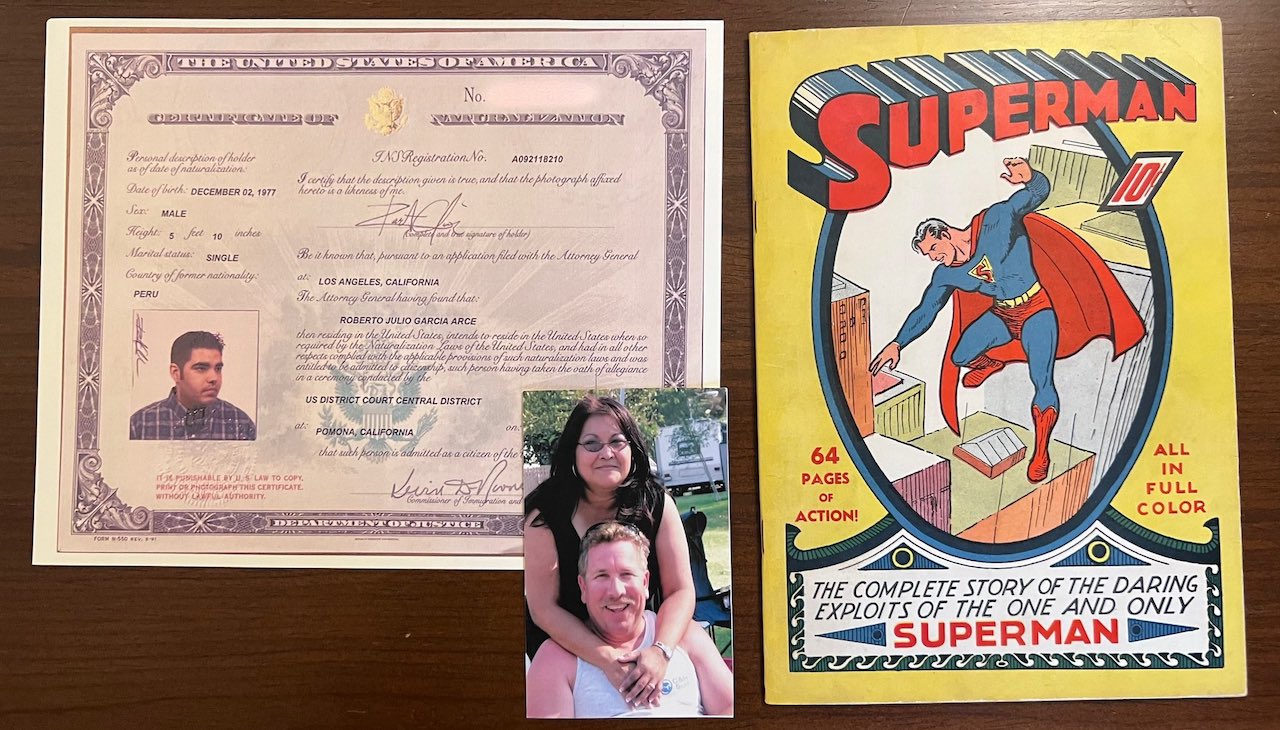 In lieu of the oft-resorted-to-Christian Bible, Congressman-elect García opts for a distinct tradition in his swearing-in ceremony.

On Tuesday, Jan. 3, a new generation of Latino lawmakers was supposed to be sworn into office. It hasn't happened on account of House Republicans being unable to elect a House Speaker, but it also hasn't stopped the new class of elected officials from creating their own traditions when the time comes.

One of them, California Rep. Robert García, is bringing new traditions into hallowed rituals of Congress by replacing the Christian Bible with mementos.

García, in place of the Bible — the ubiquitous item for oaths of office — will instead use his American Citizenship Certificate, a picture of his late parents, and an incredibly rare Superman #1 collectible comic, all of which will go beneath a U.S. Constitution.

Article VI, clause 3 of the Constitution plainly states that “no religious Test shall ever be required as a Qualification to any Office or public Trust under the United States,” and the Bible, though frequent, is not a requirement.

“Will be proudly sworn-in to Congress on the U.S. Constitution. Underneath the Constitution will be three items that mean a lot to me personally,” García, a Peruvian immigrant, wrote on Twitter.

In the Summer of 2020, then-Mayor of Long Beach, California, found out his parents, Gabriella O’Donnell and Gregory O’Donnell, had contracted coronavirus just a few months after his office announced the first pandemic-related death in March.

O’Donnell, a medical assistant of 25 years, succumbed to complications by late July, while his stepfather passed in August, a day after the family held a memorial service for García’s mother.

His mother immigrated to the U.S. from Lima, Perú when García was five years old.

Also resting beneath the Constitution will be García’s Certificate of Nationalization issued by the U.S. District Court at Pomona.

But the item that is perhaps causing the most buzz is a Superman #1 Comic — which he obtained from the Library of Congress — first published in 1939 and considered a collector’s item due to its historical significance in the comic book world.

But García, despite having made headlines for establishing his own traditions this week, has a history of challenging political expectations.

After serving three years on the California State Assembly, he went on to become the first Latino Vice Mayor in 2012, the youngest in the city’s recorded history.

Then, in 2014, he was elected Mayor of Long Beach with a 52% majority during the general election, in a crowded field of 10, and an 80% majority in his 2018 reelection, where he served as the youngest and first out LGBTQ+ mayor.

He was the first elected Latino representative to endorse California Governor Gavin Newsom, in 2017.

García faced headwinds in 2020 in the wake of the George Floyd protests when activists urged a mayoral recall, approved by the City Clerk, following reports that he had financial backing from a local police union.

The recall never happened as the presidential election cycle kicked off.

This week, García enters his first term as a U.S Representative for CA’s 42nd Congressional District, memorabilia in hand.

Editor's note: A previous version of this article stated that the comic and mementos would be above the Constitution during the swearing-in ceremony. They will be beneath the Contstitution. Garcia has also not been sworn in yet officially on account of Republicans not electing a House Speaker. Both changes are now reflected in the article.