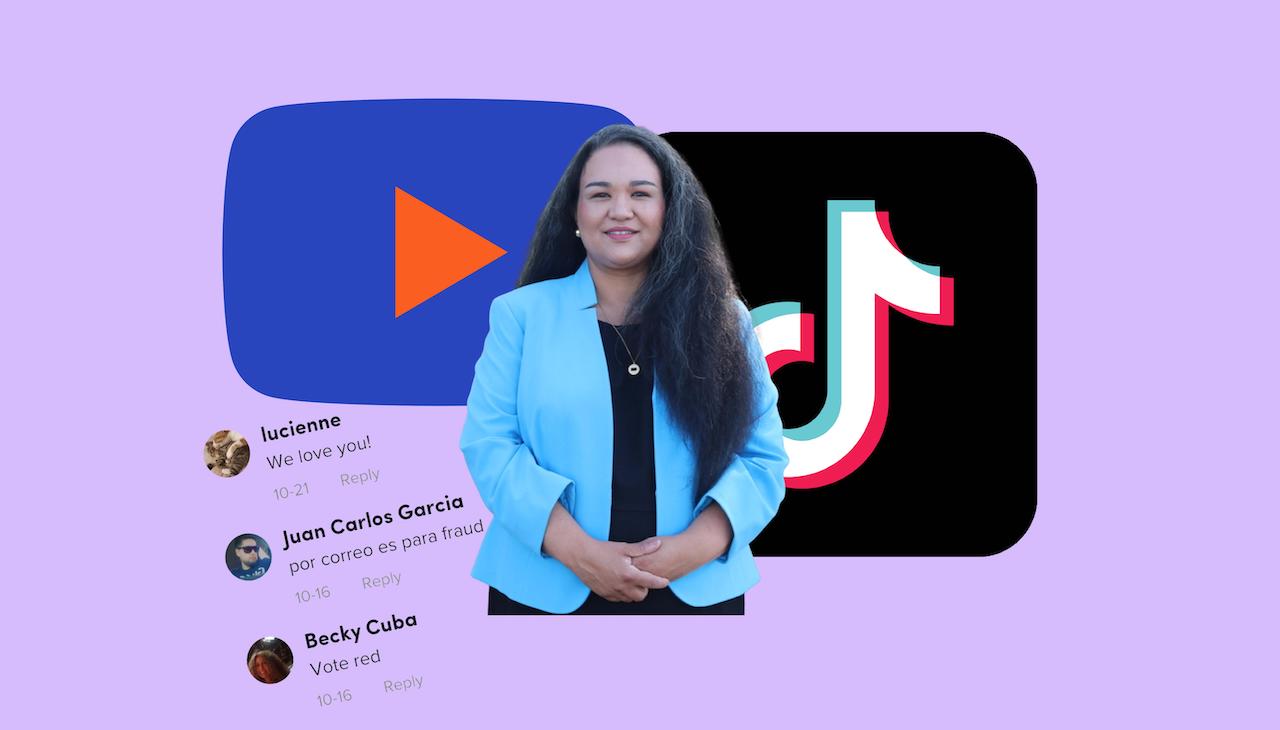 Pennsylvania is the latest battleground state to become fertile ground for misinformation campaigns. One candidate said it creeps up into social platforms.

Shamaine Daniels, who is taking on Republican incumbent Rep. Scott Perry in a week, spends her time canvassing, holding rallies, and, on occasion, fending off misinformation efforts in a 3,000-person group chat on Whatsapp, an encrypted chatting tool that belongs to Facebook.

“There was this story about how Democrats supported abortion up to 23 or 28 days after a baby has been born,” Daniels said.

She recalled being randomly added to the chat because it contained resources for non-English speakers, exchange groups, affordable housing recommendations, and a touch of campaigning.

“I’ve heard from other immigrant communities that their elders are also getting weird messages and they just seem to really target based on the ethnicities. Republicans are really smart in that way,” Daniels, a Democrat, noted.

“They know what things immigrants are fearful of.”

In 2022, midterm attention has honed in on PA. Its U.S. Senate race is one of the country’s most-watched contests, and its outcome could determine a shift of balance in the whole of the Senate. Fetterman is taking on Dr. Mehmet Oz, previously a TV personality who hosted a segment on health and wellness, and also sold dietary supplements.

Oz’s bid is puritanic of current GOP sentiment, though he has maintained he strives to negotiate in the Senate should he be elected. On the debate stage, he called it “civility.”

But the soundbite that grabbed viewers’ attention was about abortion, and how any decision should be left up to “a woman, her doctor, and your local political leaders.”

A stark contrast, Fetterman, formerly the Mayor of Braddock, PA and Lt. Gov. under Governor Tom Wolf, believes “[Roe v. Wade] is the law of the land.”

The Governor’s mansion is also up for grabs. Attorney General Josh Shapiro, a Democrat, is running against State Sen. Mastriano, who believes abortion is murder and would support a ban with no exceptions.

This year, Wolf has repeatedly vetoed proposed bills by the House GOP, but his pen could soon be rendered useless should Democrats lose the seat, making PA a state familiar with grappling with opposing political ideologies.

Those same ideologies have run rampant this year in campaign electioneering, especially for Hispanics.

The National Association of Latino Electeds and Appointed Officials (NALEO) tracked an increase in misinformation events enveloped in outreach efforts. According to the latest data, as many as 72% of Latinos heard that abortion in Pennsylvania was illegal.

“On the Latino side, I think their banking on a lot of Catholics voting for them,” Daniels noted.

“Obviously, 28 days after birth, that’s a murder, that’s not an abortion.”

Arturo Vargas, Executive Director of NALEO Educational Fund, the arm that ran data on Latino voting behavior and misinformation throughout September and October, said the amount of misinformation is unprecedented.

“This is a new phenomenon,” Vargas said. “We’re trying to see to what extent is the issue of disinformation affecting Latino voters. It is an area of concern for us.”

Vargas attributed his concerns to credibility, citing that “while 26% think it is false, 55% believe it is true.”

On election fraud, according to Vargas and the NALEO poll, 70% of the surveyed heard there was widespread election tampering, and that Donald Trump, former Republican president, was the true winner — 40% answered they know the claim to be false, but 38% believe it to be true.

“There certainly is an effect of the amount of misinformation that exists out there,” Vargas continued and added that beyond the scope of information, the channel via which misinformation travels, for Latino voters primarily, is YouTube.

Vargas emphasized the study is ongoing, and they are tracking the ways in which Republicans leverage Spanish-language messaging that perturbs policy or a Democratic candidate’s platform.

For Daniels, whose team runs a TikTok account, false claims sneak their way into comment sections in Spanish.

“When I clicked on his profile, he almost looked like a bot, but I’m never 100% sure,” she said of a recent discovery.

In responding to false claims, Daniels said her tactic is to wait it out. If the comment gets no traction, she leaves it alone. Although usually, other commenters will often step in to correct the record.

“I think it’s more compelling if it’s someone other than a candidate doing it,” Daniels noted of the interventions. “When people have distrust of people in government, the last messenger they’re going to believe is someone in government,” Daniels added and said she might’ve intervened if no one else interacted.

When asked about any strategy adopted to fend off misinformation, Daniels said they ignore much of it.

“When we get disinformation, we try not to acknowledge it as real,” she said.

Most of the efforts are on the ground while canvassing, and door-knocking.

“It’s really hard to tell someone who’s knocking at your door that there's election fraud because they wouldn’t be knocking on your door if they thought your vote didn’t matter,” she continued.

“That door-to-door is more reassuring to folks,” Daniels adds and said there is little conversation on the integrity of the voting process happening in person.