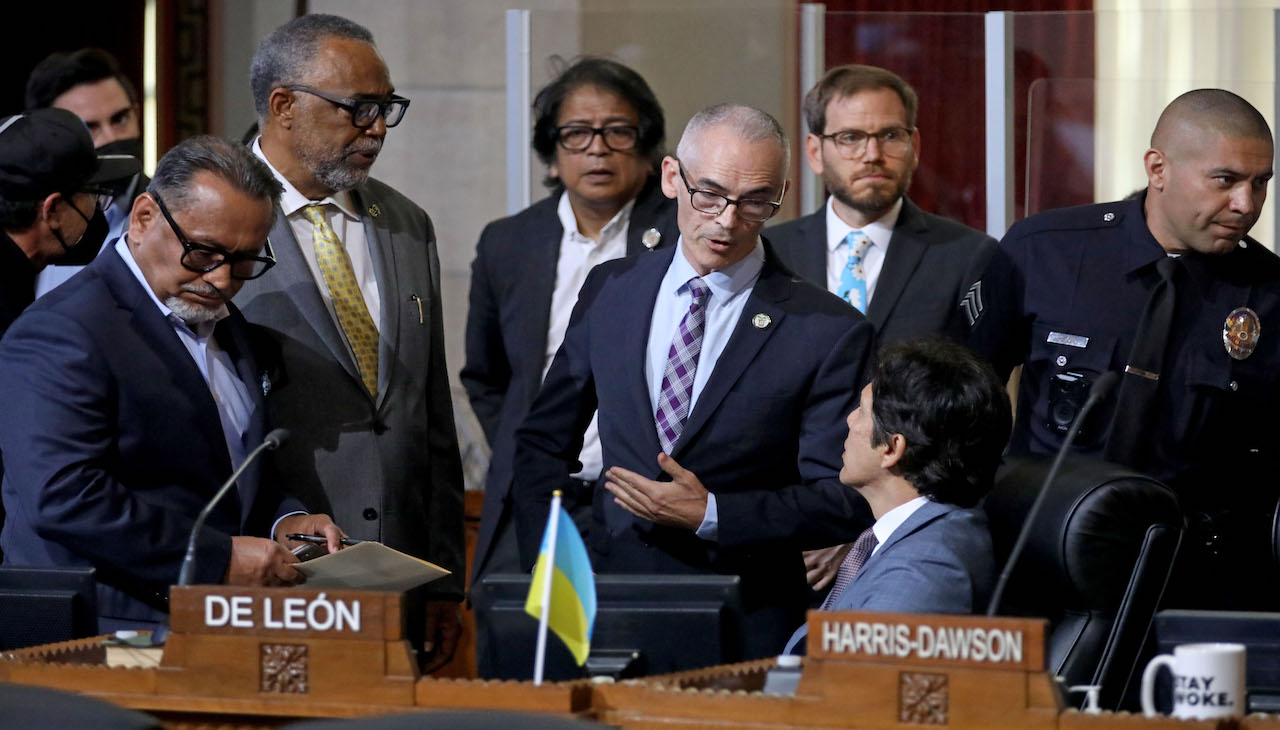 A scandal that enraged Los Angeles residents provoked by a racist conversation continues to envelop the L.A. City Council earlier this week as the local body ascribes punitive measures against the remaining members of a meeting that contained racist commentary.

Councilmembers Gil Cedillo and Kevin de León are the two surviving, active members in city chambers. Nury Martínez — the former city council president — announced she would be taking a leave of absence before she tendered her resignation.

The measure included former member Martínez since the measure was introduced before her resignation.

In a unanimous, 12-0 vote led by Paul Krekorkian, the sitting council president and L.A. City Council moved forward with censuring both Cedillo and de León for their direct role in a leaked, closed-door meeting where racist remarks were hurled.

Censuring does not mean Cedillo and de León are suspended, but rather, that both have failed to subscribe to the expected conduct of the city council. The censure also activates an ad-hoc committee to determine whether a criminal investigation is warranted.

The council in its standing cannot suspend or remove members, but censuring sends a harsh message, compounded with persisting demands for immediate resignations.

"It's going to take us years to rebuild this trust," Councilmember Paul Koretz said before the vote.

Krekorkian, who’s also asked Cedillo and de Leon to step down, told ABC7 he would explore “every legal option available” to remove them.

"It's a challenging question,'' Krekorian said. "I certainly don't want a situation where the majority of a council who disagrees with a councilmember says, ‘Oh, well, he or she is not performing their duty.' So there has to be a clear definition of what that means.''

"Censure is our collective voice, and this vote puts the council formally on record,'' Blumenfield told ABC7.

Cedillo and de León, who have been notably absent from council meetings, have not indicated that resignation is on their radar.

Cedillo has distanced himself from the spotlight, seemingly attempting to fly under the radar as pressure for his removal from city council mounts. His term ends in December of 2022.

De León, in turn, embarked on a media tour. On his stops, he repeatedly expressed his apologies, but maintains he would not relieve himself of his duties, and that he is “not the person the folks have been painting me to be."

The District 14 council member has two years left on his term.

"There is no realistic possibility that you can effectively continue to serve," Krekorian told de León in a letter. "Every day you remain interferes with the council's ability to function, delays the city's healing process, hurts your constituents and reduces your chance of redeeming yourself."

Krekorkian is not off base. Since the release of the tape made its rounds through national headlines, city council chambers have been met with daily protestors who refuse to abate efforts to pressure Cedillo and de León into resignations.

In addition to daily disruptions, the remarks leveled during the meeting have set off legal probes.

L.A.’s Police Department is investigating if the meeting was recorded lawfully under state law — pursuant to California law, all participants must consent to be recorded. Attorney General Rob Bonta says matters related to the recording are under the police’s purview, and not his office.

Additionally, the investigation stemmed from commentary raised regarding redistricting, and whether it was executed lawfully, according to Bonta, a Democrat.

Bonta says the findings could lead to civil liability or criminal charges, in accordance with what is found in the investigation.