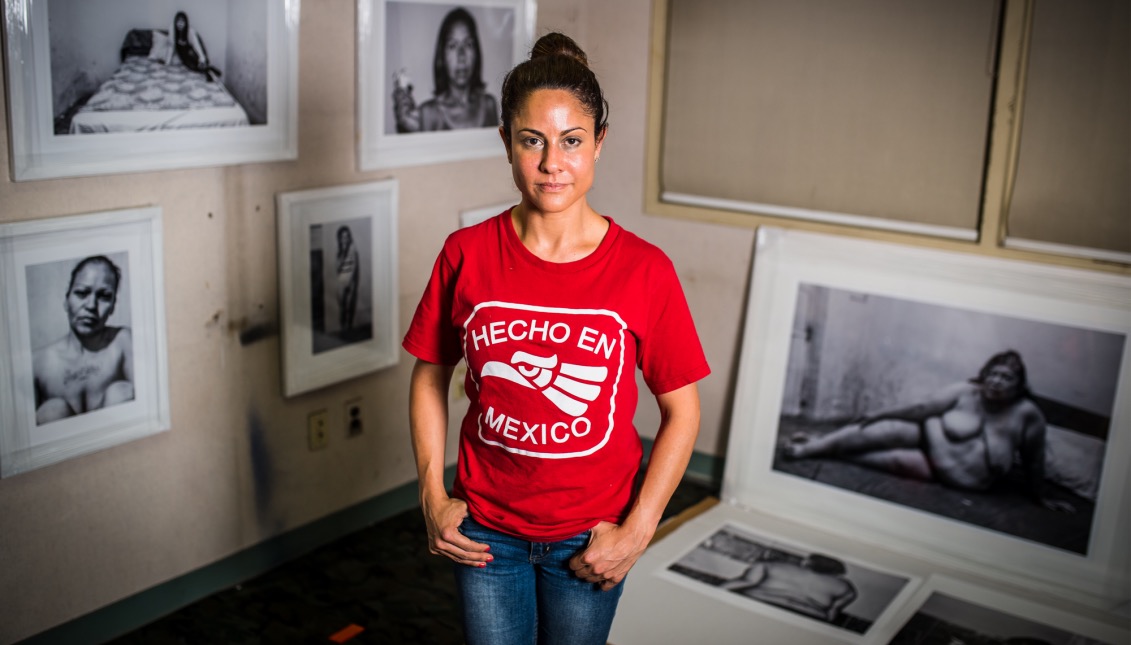 Artist Ada Luisa Trillo’s latest exhibit of photographs, How Did I Get Here?, in the brothels of Juarez, Mexico, examines how women become entangled in sex work and what can be done to get them where they want to be. Photo: Andrés Albaladejo / Broad…

Prostitution: a photo gallery in black and white

Artist Ada Luisa Trillo’s latest exhibit, photographs in the brothels of Juarez, Mexico, examines how women become entangled in sex work and what can be done… 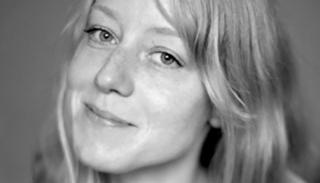 Ada Luisa Trillo was born in El Paso Texas and spent much of her youth in Juarez, Mexico. After studying in San Francisco and across Europe, she settled in Philadelphia, but her culture and the areas where she spent her youth were always close to her art. Her primary artistic medium is painting rich with gold leafing and symbolism of Latin America.

After studying photography at the University of the Arts in Philadelphia Trillo wanted to photograph immigration along the borderlands from Mexico in North America, but found it too risky for those involved in crossing. While at a church in Juarez she met a maid they called Luli. Luli shared with Trillo that she was a former prostitute and offered to take her to visit the brothels in an effort to bring more awareness to the plight of the young women there.

In The Brothels of Juarez 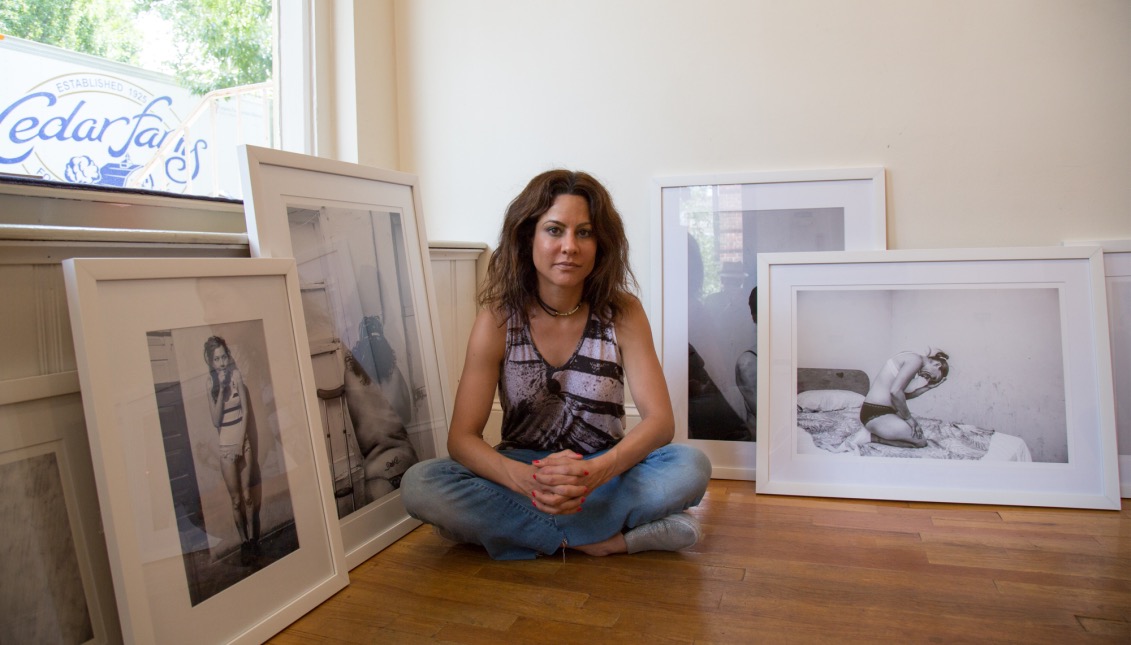 “It is a very dangerous zone, so you need to go with somebody and I wasn’t too aware of that.” Trillo said while at her studio surrounded by many of the photos she took. “I thought it was going to be just a bunch of young cute girls with glitter miniskirts but it wasn’t like that, it was the contrary. It’s women that are completely exploited, their addiction to heroin is such that it becomes their lives. Their only reason for survival is drugs. They’re trapped; they don’t have their own money and mostly they are suffering.”

After meeting the women for the first time, it became important to Trillo that they tell their stories. She wanted to portray their dignity while also showing the truth of their harsh conditions. Trillo wanted to do something to help them, and thought that what she could offer was helping these women find their voice through her art. In this way, she realized would not be recasting their stories through her own perspective, but that through the images, could tell their own stories through her lens.

“I am not an activist,” Trillo said, “I am an artist, and art for me, it is very important that it gives you a feeling. When you see art, you have to feel something, if you see it and you feel nothing then it does not touch you.”

Trillo spent three to four months at a time over 3 three years with the women of Juarez brothels. Starting in early 2015, she went to visit the girls. While laws vary from State to State, of the 31 States in Mexico 13 have laws regulating prostitution and, according to the United States State Department, only 22 of those States have laws against sex trafficking, but they are rarely enforced. Trillo saw this for herself in Juarez.

“The cops are everywhere in the zone,” she said of what she witnessed while taking photographs “they are outside of brothels just kicking it.”

The areas where prostitution is decriminalized are commonly referred to as "zonas de tolerancia". Sex work by those over the age of 18 is generally accepted, sex with a minor under the age of 18 is expressly illegal throughout all States in Mexico. All the women in the photographs would tell Trillo they were 27 because of these age restrictions. They do this to protect themselves, as they could be legally held accountable should the owner of a brothel say the workers lied about their age. From the photos, it is clear many of them were very young and some admitted during interviews to coming to Juarez as unaccompanied minors. The majority of the women at the brothels were not from Juarez originally, many coming from States further south or from other areas of Latin America all together.

Trillo said that while none of the women would readily admit their true age or felt free to explain that they did not mean to settle in Juarez, it was clear to her that none of them intended to end up at the brothels. “It is pretty obvious when a woman says ‘I started when I was 13, and I am from Guadalajara and my parents are in the United States.’”

Withdrawal into the unknown 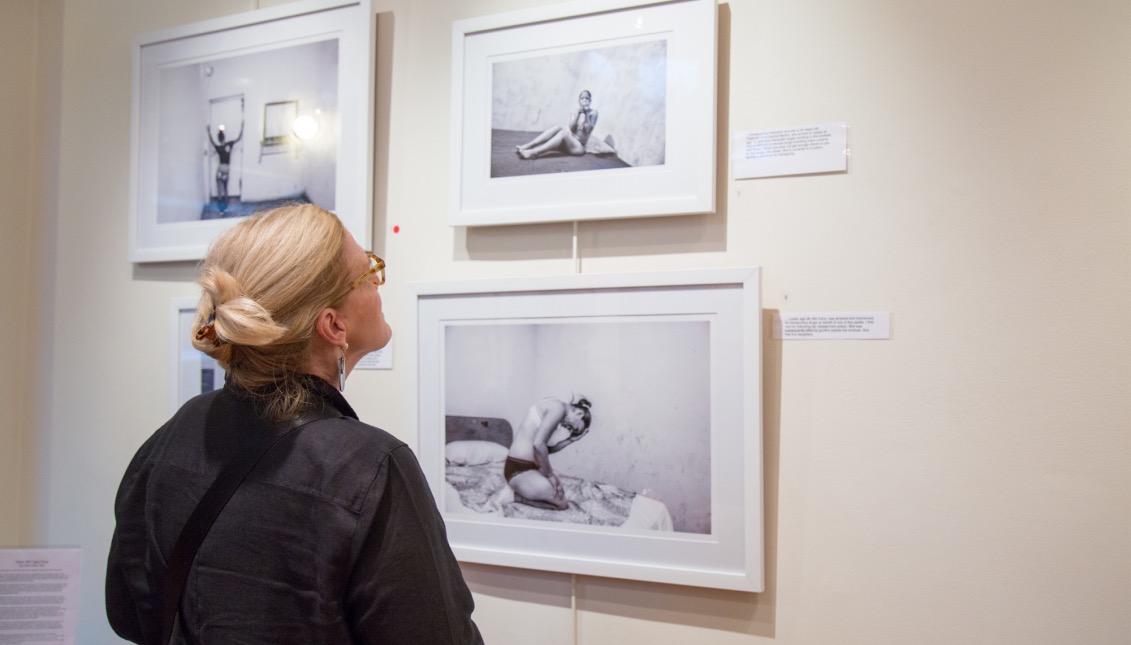 Yet, even if many of these women did intend to cross the border into the United States and succeed, there would be no guarantee they would be free from the drug cartels, human trafficking, or sex work. The numbers of women and children transported throughout Mexico and into the United States for sex work have been obscured for years. A study of human trafficking from 2010-2013, conducted by Observatorio Nacional Ciudadano, was only able to obtain information from 16 of the 31 States in Mexico; the remaining 15 States would not provide any trafficking statistics.

A US State Department Office to Monitor and Combat Trafficking in Persons, 2014 Trafficking in Persons Report identified that “Child sex tourism persists in Mexico, especially in tourist areas… and in northern border cities such as Tijuana and Ciudad Juarez. Many child sex tourists are from the United States, Canada, and Western Europe, though some are Mexican citizens.”

The same report also said that it was “difficult to assess government efforts to identify and assist victims” as there were “no comprehensive statistics available” on exactly how many women and children were victims of human trafficking or sex trafficking in Mexico or from Mexico and into the United States.

Sex trafficking is not only legal in some States in Mexico, but also has levels of legality in Texas. According to the anti-human trafficking group New Friends New Life, Texas law does not prosecute individuals that assist or operate in transporting sex workers. Due to these vague and relaxed laws in Mexico and Texas certain borderlands experience sex tourism. Trillo explained that, while those women closer to the border are also in difficult situations, the situations are very different further into Juarez.

“The sex tourism you see is in another area of town that is closer to the border. A lot of the soldiers from Fort Bliss are in the desert between Texas and New Mexico and many of them are the ones who come have sex with the girls and go back.” Trillo explained of the difference between "zonas de tolerancia" throughout Ciudad Juarez.

“Those girls are not in the same position; the girl that engages in relations with Americans is charging maybe $25 or $30. The girls I take pictures of charge $3 or $5. It is a different world.”

According to Dr. Laura Bamford, board-certified in Internal Medicine and Infectious Diseases and currently working at Philadelphia Fight, "Sex workers throughout the world share the commonality of often being forced into the work by human trafficking, economic survival, and substance use disorder.” Beyond substance abuse affecting the physical health of these women and the communities they live in, the sex work itself negatively affects these women, as their options for health care in many areas are often very limited. “The enormous and multilayered stigma of sex work routinely prevents these individuals from safely accessing essential medical services like substance abuse disorder treatment, treatment and prevention of HIV infection and treatment for sexually transmitted infections and Hepatitis C infection."

Beyond the borderlands in Juarez, Articulo Journal of Urban Research estimates that since 2009 as many as 10,000 businesses closed, resulting in as many 230,000 residents leaving the city. Much of the movement from the city, according to Articulo, has been attributed to the drug related violence and gang activity that rose in the area in that time. They also estimate that in 2010 alone over 3,000 people were killed in Juarez. La Jornada En Linea and Proceso have reported that about 800 women sex workers are known to have been disappeared or murdered in the city between 2010 and 2014. Trillo witnessed this as well.

Voices of the Silenced

While the idea for the photography project started as an immigration issue on the Southwest border, for Trillo, the brothels she photographed are not a border issue. At issue is drug abuse and abuse against young women. Of the 23 photos of 20 women that will be in the exhibit 2 were disappeared since she began the project. One woman photographed, Claudia, disappeared and was never seen again, another, called Bonita, was murdered.

“Luli told me that this girl was abducted,” Trillo said in her studio pointing to a large framed photograph of Bonita wrapped in clear plastic to keep it safe as it traveled to Twenty-Two Gallery, 236 South 22nd St., where the work has been on display since last Thursday until August 6, “she looked different from the other girls. She was a little bit blonder, with hazel eyes. When we interviewed her she was very shy, but she still wanted to do it because she wanted to buy crack. The last time I went back, I asked, can I take a picture with Bonita? The owners said no, they killed her. It was very sad for me.”

The silencing of the voices of those young women touched Trillo, who is the mother of two teenaged daughters. “What happens with the women that are disappeared,” she said “they all follow the same profile, young, lower class, because they have no voice.”

These experiences encouraged Trillo to donate all of the proceeds from the sale of any photographs from the exhibit, and Twenty-Two Gallery owner Shawn Murray was in full agreement. All proceeds from any sales will be donated to The Coalition Against Trafficking Women, a global nonprofit network focused on ending sex trafficking centered on survivors’ and victims’ rights, and the Mother Antonia Center of the Oblate Sisters of the Most Holy Redeemer, Mexico City, a religious organization that started in Madrid in 1864 that focuses on assisting prostituted and drug dependent adult women and their families.