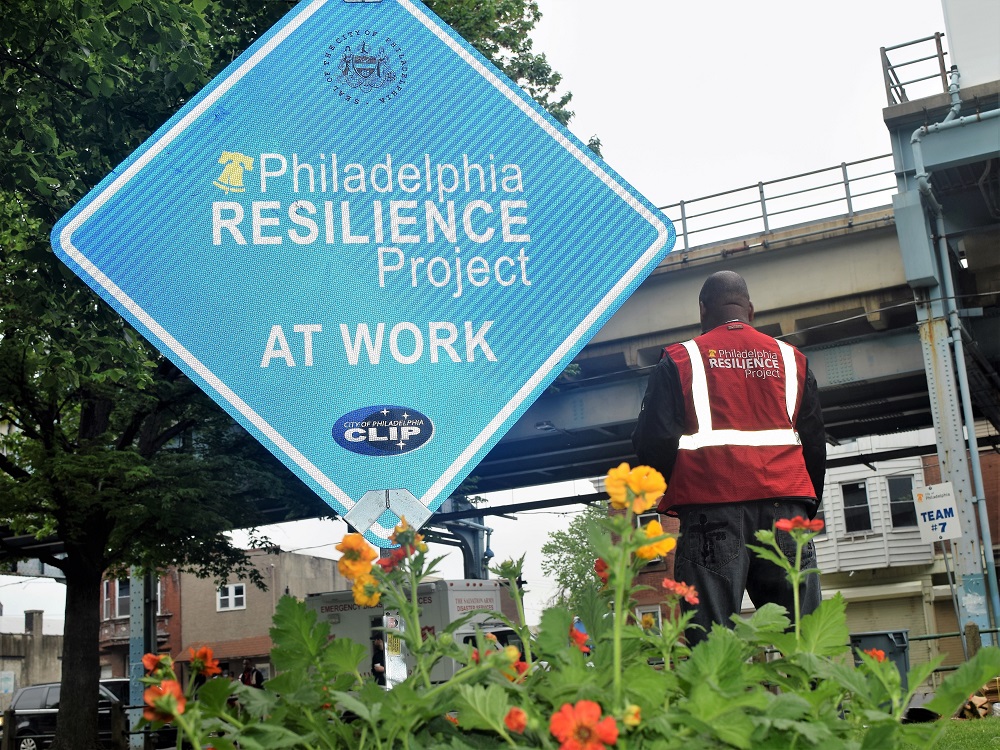 A sign announcing the work of the Philadelphia Resilience Project in Harrowgate. They can be seen across Kensington and Fairhill. Photo: Philadelphia Mayor's Office

The Philadelphia Resilience Project: The power of listening to a community

Kensington and Fairhill have been two neighborhoods forgotten by the city for too long. A new initiative is changing that narrative.

For years, residents would come to Harry Tapia to complain about the encampments dotting the route of the Conrail line snaking east to west across the northeastern border of Kensington before cutting into the heart of Fairhill.

The encampments had become the epicenter of human suffering in the city and kept inhabitants in an endless cycle of homelessness and drug addiction that affected the surrounding neighborhoods.

As a resident, Tapia had seen first-hand the effect of the encampments — his street maintained one of the biggest. As Director of Operations at HACE, a community development organization spawned during the 1980s, Tapia also had the city connections to bring attention to the issue.

But for years he would bring it up to the city managing director and heard nothing. The lack of city response was a trend across Kensington and Fairhill.

“We never saw anyone from the city out in the neighborhood,” said Tapia, “not the managing director, not the Streets Department, no one.”

It wasn’t until June 2017 that the city finally began addressing the encampments through the Gurney Street Project. HACE was one of the many community organizations contacted to help with the initiative.

Two leaders on the city side of the early effort were JoAnna Otero-Cruz and Damaris Feliciano.

Both joined the city in late 2016. Tasked with organizing community stakeholders behind the Gurney Street Project, Otero-Cruz and Feliciano helped the city host a first community summit in Fairhill on January 21, 2017, drawing over 300 people.

“Capacity was an issue, but it was a good issue,” said Otero-Cruz.

Also born in the first summit was ‘El Barrio Es Nuestro’ — the name given to the monthly meetings between community members and the city.

Some of their early projects in the area included cleaning properties, beautifying lots and community gardening.

All this planning set the stage for a much bigger program in the future addressing all of Kensington and Fairhill.

The Philadelphia Resilience Project is Born

That future came on October 3, 2018 — a little more than a year after the Gurney Street Project — when Mayor Jim Kenney signed an executive order establishing the Philadelphia Resilience Project.

The initiative involved 34 different city departments working together to accomplish seven missions over the following years in Kensington and Fairhill:

On June 25, the Mayor’s Office released a progress report of the project’s accomplishments so far. Some of them include clearing the two largest encampments (at Emerald and Lehigh streets and Frankford Avenue and Lehigh Street) and the establishment of a Safe Corridors program at six schools for safe travel to and from school.

In the realm of community engagement, Otero-Cruz and Feliciano helped create a community advisory committee and a dedicated 311 hotline for the neighborhood. The latter relies heavily on data — something both say is used more to inform their engagement than ever before. Data is kept on everything from vacant lots and buildings to abandoned cars and trash.

“If you ask my unit, specifically with community service, we look at it daily,” said Otero-Cruz.

The new approach allows the city to continue absorbing and adapting to residents’ needs.

The hotline also maintains a level of contact that never existed before. Rather than silence, residents get answers and updates on their reported problems.

“We’re able to give them that ‘I see something’s changing’ effect,” said Feliciano.

“I think it’s a healthy exchange. We have been very open and very humbled to say: ‘Listen, we cannot do it alone’,” said Otero-Cruz.

El Barrio Es Nuestro is held monthly, and Otero-Cruz and Feliciano stay mindful to move the meeting locations around so they can hear from as many residents as possible. Their growing network of nonprofits and faith-based organizations in the neighborhoods help facilitate the meeting spaces.

“Depending on where you have it, some people won’t cross certain streets,” said Otero-Cruz.

The strategy means turnout has been anywhere from 30 to 60 residents at any given meeting. It also depends on the meeting’s topic, which is also set by community members.

“We listen to them,” said Otero-Cruz. “They set the agenda."

Otero-Cruz and Feliciano also make themselves available for community meetings outside of El Barrio Es Nuestro, where they give updates on the project.

For Harry Tapia, the meetings and new services have given residents more confidence when relaying problems to the city.

“The community definitely has a bigger voice,” he said.

It’s a voice Feliciano says has always been there, ever since she first visited the neighborhood as a little girl from Hunting Park.

“They are individuals that want to make a change. They don’t want to just stand there with their hands crossed,” said Feliciano.

It's personal for Otero-Cruz. She was born and raised in Kensington and still has family living there. She explained how the trauma the community has experienced has shaped its persevering character.

“Their level of humbleness and resilience to charge forward and really fight for what they deserve on behalf of their children,” said Otero-Cruz, “is just such a humbling experience.”

Moving Forward with the Community

But both Feliciano and Otero-Cruz know their work is far from over. Both look forward to continuing to communicate with the community, so residents have a seat at the table when discussing the future plans of the project’s six other missions.

To them, community engagement sits at the center of the continued progress of the Philadelphia Resilience Project.

“I don’t think anything can move forward without that,” said Otero-Cruz.

A new thing they’ve had to communicate is how the new $36 million funding from the city will be used. A majority of it will go towards shelters for the homeless population and providing various behavioral health services for addicts.

Where the funding does give them flexibility is in supporting the other missions of the project. Blight is still a major issue and the extra money means more vacant blocks and empty lots can be beautified with the help of community members. The safe corridors program for schools will also be expanded.

Harry Tapia is proud of the city’s collaboration so far but is of the same mindset that work still needs to be done.

However, slowly but surely, positive developments are beginning to outnumber the negative.

In May, HACE unveiled Casa Indiana, a new affordable housing development at 2nd and Indiana Streets for senior citizens in the neighborhood. It sits a short walk from where one of the biggest encampments used to be along Gurney Street — where the project began.