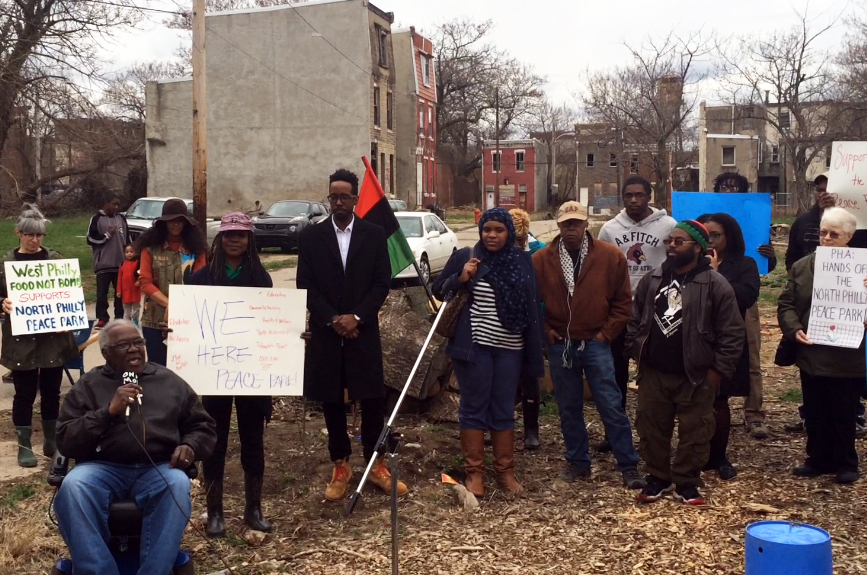 PHA will not remove the fence around North Philly Peace Park

Nearly 50 people gathered Tuesday at the 2400 block of Bolton Street in Sharswood to protest a newly erected fence around the North Philly Peace Park, but PHA…

Nearly 50 people gathered Tuesday at the 2400 block of Bolton Street in the Sharswood section of North Philadelphia to protest a newly erected fence around the North Philly Peace Park.

PHA owns the five parcels of land where the garden has grown and served the community since 2011. There are plans to start construction on 57 low-income and market-rate rental homes as early as this summer.

Legally, PHA did not have to provide any notice to fence off the land. But Mr. Leroy Smith, an elder of the Peace Park who lives in the Blumberg public-housing project across the street, called the PHA’s actions “sneaky” and “unjust.”

Despite promises of compromise, PHA announced today that not meet the Peace Park’s request for immediate removal of the fence.

Sharswood residents cleaned up several tons of trash in order to make a garden on the PHA-owned lot. Photo: Philly Peace Park

By all accounts of the USDA’s definition, Sharswood is a food desert. Its closest available supermarket — the Fresh Grocer at Temple University — is a mile away on foot. Residents are steeped in 53 percent deep poverty rate, as well as one of the highest violent crime rates in the city. The community also endured the recent closing of two schools, Roberts Vaux High and Gen. John F. Reynolds Elementary.

In 2011, the North Philly Peace Park cleaned up over a dozen vacant lots and began building their community from the ground up. In the last four years, they have puts thousands of hours of labor and thousands of dollars of resources into the space.

Why PHA gave such short notice remains unclear. Less clear is why they waited until after the planting season was already underway. Nichole Tillman, spokeswoman for PHA, told AL DÍA Monday that nothing had been planted yet.

But that wasn’t the case.

Two weeks prior, the Peace Park laid down three lot-length rows of seeds — almost half of the garden. White namecards stick up from the soil right now: American purple top rutabagas, Thai long beans, Florence fennel, savory leaf spinach, and “mystery beat.” The kale and collard greens are self-seeding annuals, meaning they are already starting to see new growth. In short, the garden was well underway for its seasonal harvest at the time the fence went up.

Paul Glover, founder of the Philadelphia Orchard Project, called the event “an official act of vandalism to put a garden in jail.”

Amia Jackson, the garden’s director, estimates that the garden feeds 200-250 people in the neighborhood each year. It’s also a community space for the children, who are offered reading and music lessons in the “earth ship” — a structure built of dirt, old tires, and other recycled materials collected from Sharswood’s 100-plus vacant lots.

PHA and 5th District Councilman Darrell Clarke have said they are eager to work with the Sharswood community and come to an agreement regarding equitable land use.

Kirtrina M. Baxter, a food justice activist and community organizer for the Public Interest Law Center, said that the PHA told residents owning a new parcel of land would “legitimize” the park, which angered many residents.

The land had been neglected for so long; the park was already “legitimate” as far as they were concerned.

New conversations began in January when PHA proposed a $500 million investment that would demolish the existing projects and built new affordable housing. The plan has been met with enormous skepticism, especially regarding the large and undefined amount of land that PHA would need to develop.

Second- and third-generation Sharswood residents have been vocal about their distrust of the organization for decades. In 1969, PHA built the 501-unit Norman Blumberg Apartments. The public-housing project has been largely credited for the crime surge that caused the middle-class residents to flee, pitting the neighborhood in a cycle of violence and abandonment over the last 45 years.

The sudden placement of fence around the Peace Park — the first visible move of the new PHA plan — has affirmed residents’ skepticism.

Since the $500 million plan was introduced, PHA and the Peace Park leaders have been in negotiations to secure land equivalent to or greater than the size of the park’s current site. Over 30 community meetings have taken place, and PHA has promised to keep communications open to ensure that displacement doesn’t take place.

Following the installation of the fence, the Peace Park issued four demands to PHA:

Paul Glover also suggested that the Peace Park should demand compensation to the tune of $15 an hour for years’ worth of labor, in addition to replenished resources.

“Although, PHA will not reimburse Peace Park representatives, PHA has identified a new location for the park.  This location is part of an area that is designated for green space in PHA's master plan for the Blumburg/Sharswood neighborhood.  The Peace Park along with PHA residents and other community members will have the opportunity to provide input on the design for the green space. Construction is scheduled to start early in the summer, however ground prep work will begin beforehand. Therefore, the fence cannot be removed.”

They did not answer AL DÍA’s questions regarding why such short notice was given about the fence.

“We would like to see the words of the PHA become flesh...We will not be forced from this land. If we leave, it will be voluntary.”