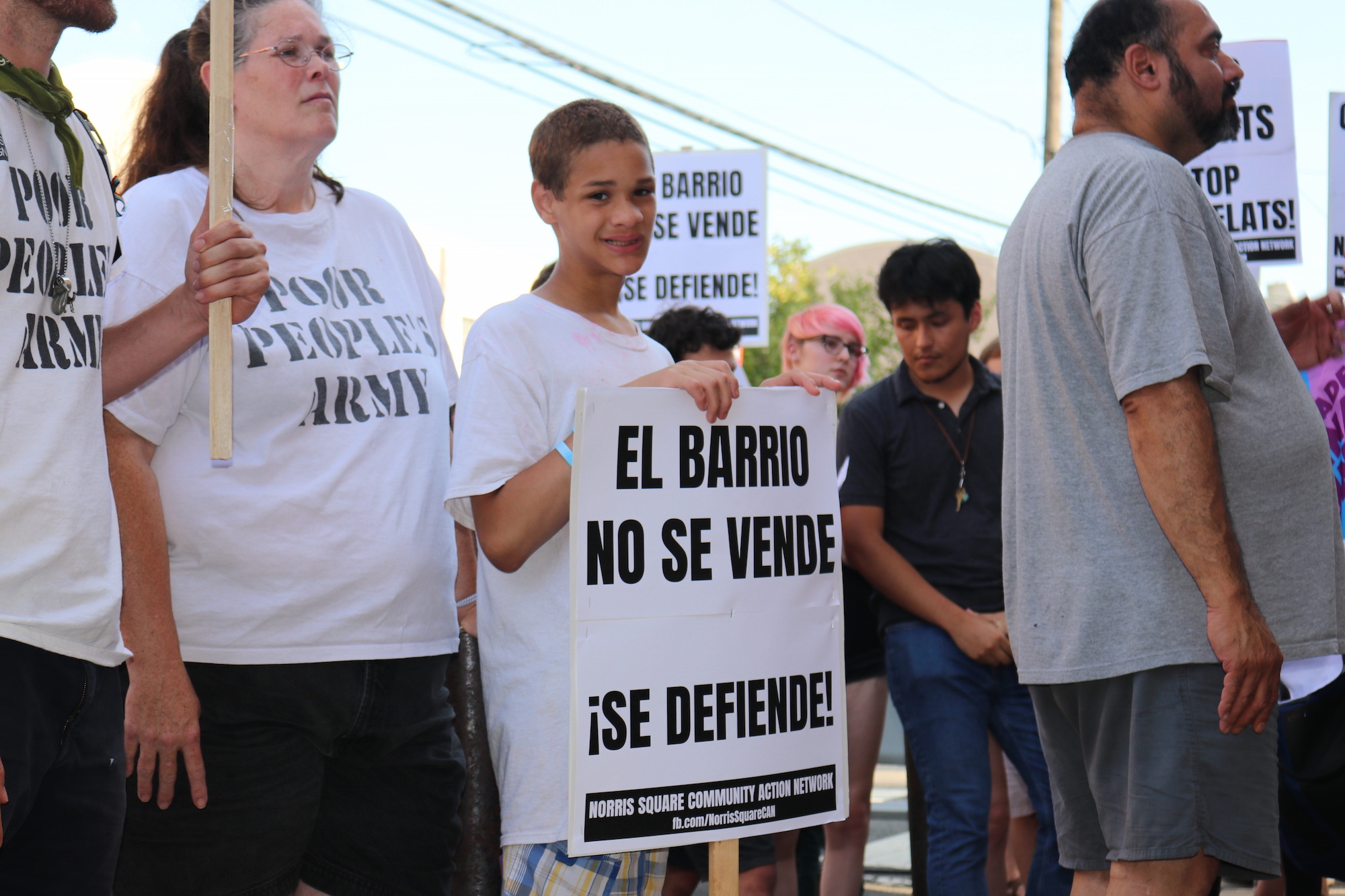 Residents were out in force at the corner of Howard and Norris streets on Aug. 8 against exclusive development in their community. Photo: Michelle Myers/AL DÍA News.

On Aug. 8, the protest of one developer marked the beginning of the community’s fight against exclusive development in the neighborhood.

Imagine for a second that you’re in your home, watching TV and enjoying dinner when you get an unexpected knock at your door. You answer to find an unknown individual telling you to move out to make way for new development in your community.

It’s a reality many in the Norris Square neighborhood have had to grapple with for the past couple of years.

“How would you feel?” asked Jackie, a block captain in the neighborhood who spoke at a recent community protest of gentrification held on Aug. 8.

The many construction sites, full of constant hammering and buzzing saws, that once dotted Northern Liberties and Fishtown have crept north on the Market-Frankford line to the predominantly Latino community.

For many looking from the outside in, this movement is seen as a sign of progress being made at revitalizing parts of the city in need.

But for those residents who’ve lived in Norris Square for most of their lives, it is a telltale sign of the gentrification that has defined the past decade in the lower northeast of Philadelphia.

On Thursday, Aug. 8, those residents — led by the Norris Square Community Action Network —  held a demonstration at the corner of Norris and Howard streets to make their voices heard in the piecemeal development of their neighborhood.

The target of the protest was Onion Flats, a nearby developer with plans to turn a deserted factory on the block into an 88-unit apartment building.

Nilda Pimentel, one of the protest organizers stressed that residents are not stubborn to the idea of change and development, but the amount of units planned by Onion Flats is unsustainable

“This community and many other communities can not continue to absorb density,” said Pimentel.

As a compromise to the 88-unit plan, the community requested Onion Flats downsize the project to only 56 units.

But density isn’t the only problem.

In a community where the average income is approximately $23,400 a year, the asking price per month for a one-bedroom unit in the new apartments is $1,400. For context, the U.S. Department of Housing and Urban Development designates any single person making less than $50,500 per year in Philadelphia as low income.

Cheri Honkala, a former Green Party candidate for Vice President and longtime activist for the homeless in Philly, laid bare what this disparity looks like from a majority of the  neighborhood’s perspective.

The protest also highlighted the health effects of the construction, specifically citing poor air quality as a result of demolishing old buildings in the neighborhood.

Beyond the Onion Flats, the demonstration on Aug. 8 was also a call to the city to reform its zoning laws and tax abatement legislation, which according to literature distributed by protest organizers, “tilt the scales to developers with deep pockets.”

City Council put off reforming Philly’s 10-year tax abatement until it returns from its summer recess in September.

Until their voices are heard, Norris Square will keep fighting.

“This is not the first and it’s not going to be the last development,” said Pimentel.