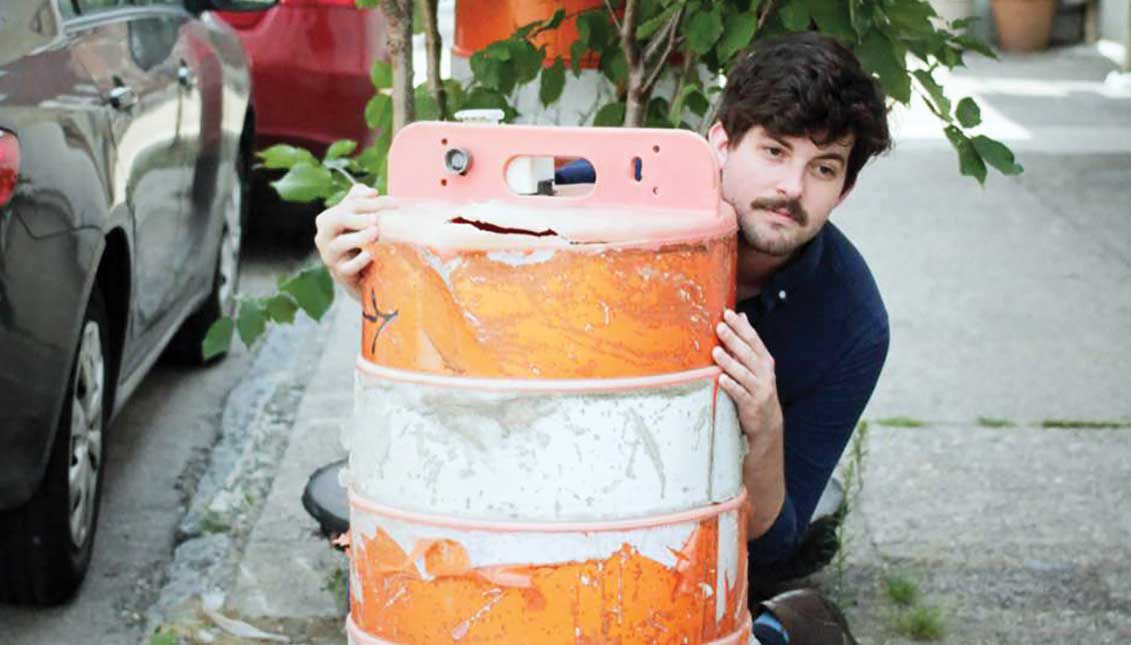 In 2013, Venezuelan American writer Sebastian Castillo moved to Philadelphia, where he teaches Creative Writing. Photo provided by the author

Sebastian Castillo was born in Venezuela 30 years ago of a marriage of dancers - his father is Venezuelan and his mother is American - but his childhood memories in Caracas are rather vague. When he was 8 years old, her mother decided that she and his little boy would move to New York to continue her career as a professional dancer and get away from the increasingly complicated political situation in the country. Therefore, Sebastian had to say good bye to the good weather and the warmth of his father's numerous family in Caracas, as well as to Spanish (a language that today speaks with difficulty) to adapt to his new life on the American East Coast.

His integration in the US was not complicated: Castillo was used to speak English with his mother, so he did not suffer the language barrier like other Latino immigrant children -although he had to take some ESL courses before starting school- and soon he made American friends, with whom he still hangs out today. But yes, he admits that at the beginning he missed the good weather, the vacations on the beach and the great family he had in Caracas. "My mother's family in New York is very small," he said.

Castillo lives in Philadelphia since 2013, where he teaches Creative Writing in various universities (La Salle, Temple, UPenn), and tries to find time for his other passion: writing. In 2017 he published “49 Venezuelan Novels” (Bottlecap press), a compilation of micro-fiction stories inspired in both Philadelphia and an imaginary Venezuela.

“Full of depth and imagination, Castillo uses imagery in a simple yet intense way. From stories of fish markets to spiteful violins, it almost seems that these novels are snippets of family stories long passed down, just now put to paper”, according to a statement made by his publisher.

“I started writing in college, around the age of 20. After graduating, I decided to pursue an MFA in Fiction, because I wanted to dedicate myself to writing in a more focused setting”, said Castillo, who holds an B.A in English and Philosophy at Manhattan College, and in 2016 he moved to Philly to start an MFA at Temple University.

In fact, it was in College where he discovered some Latin American authors that would push him to focus more seriously on writing. For example, the Chilean Roberto Bolaño:

For Castillo, “writing is medium that allows, more or less, for an infinite quality of possibility with regards to verbal expression. I guess that sounds kind of lofty, but it's true. There are really no rules. In life there are rules. That kind of freedom can be very exciting”.

His latest book, “49 Venezuelan Novels”, has been described as a compilation of micro-stories, almost “surrealistic”, a reminder of Latin American magical realism, but Castillo doesn’t feel influenced by this literary style, oftenly associated with the works of Gabriel Garcia Marquez.

In terms of "micro fiction," I would say that some of my biggest influences are probably Lydia Davis, Russell Edson (Americans), and Daniil Kharms (Russian),”, Castillo said.

Originally, the book had to include  99 micro-stories, but Castillo explained that there were many he felt didn't fit:

“I kept cutting until I got to 49. I wanted it to be a number that suggested something incomplete, and maybe random—that there was more to the text than what was printed. And I think that's true: ideally, the reader becomes a co-author when they read these novels—there's so little there, and perhaps they can write the rest of the novel in their head, as they see fit. I very much value that kind of relationship between reader and writer—both working together, making stories”, he added.

Since he left Venezuela, at age 8, Castillo used to visit his father at least once a year for many years - at least 6 or 7 times. But he stopped traveling to Caracas when the political situation got worse, under Maduro’s government. "My father and my family are not doing well, as is the case with many people in Venezuela currently," he explained.

Nearly 1 million Venezuelans have left their country over the past two years, according to the International Organization for Migration, with some experts comparing the massive scale of the exodus to the flow of Syrians into Western Europe in 2015.

However, Castillo is worried about the perception of Venezuela from the U.S, which he thinks it’s absolutely inaccurate.

“The overwhelming perception of Venezuela in the US (at least in the media) is from a smug, imperialist, conservative perspective: a failed socialist country”, he said. “At the same time, there are many apologists on the Left who refuse to acknowledge the responsibility of Chávez and Maduro with regard to the country's current situation. As a socialist, I support socialist politics, of course. But it doesn't mean that those politicians are absolved from critique.”

While Castillo has no doubt of his “socialist” identity, he is not that sure about when he started to be conscious about his Latino identity.

“I'm a white person from Venezuela, with a Venezuelan dad and an American mom. I think an issue that many Americans have is that they their concept of race doesn't allow for "whiteness" to come from places they typically think of as non-white. But the reality is that there are white people in Latin America who benefit from the privileges of whiteness very much in the same manner as white people in the US”, he said.

“So while I do think of Venezuela, and being Latino, as a part of my identity, it would be absolutely irresponsible for me to wholly identify as such, given how obviously I would be read as a white person in a social capacity”, he concluded.