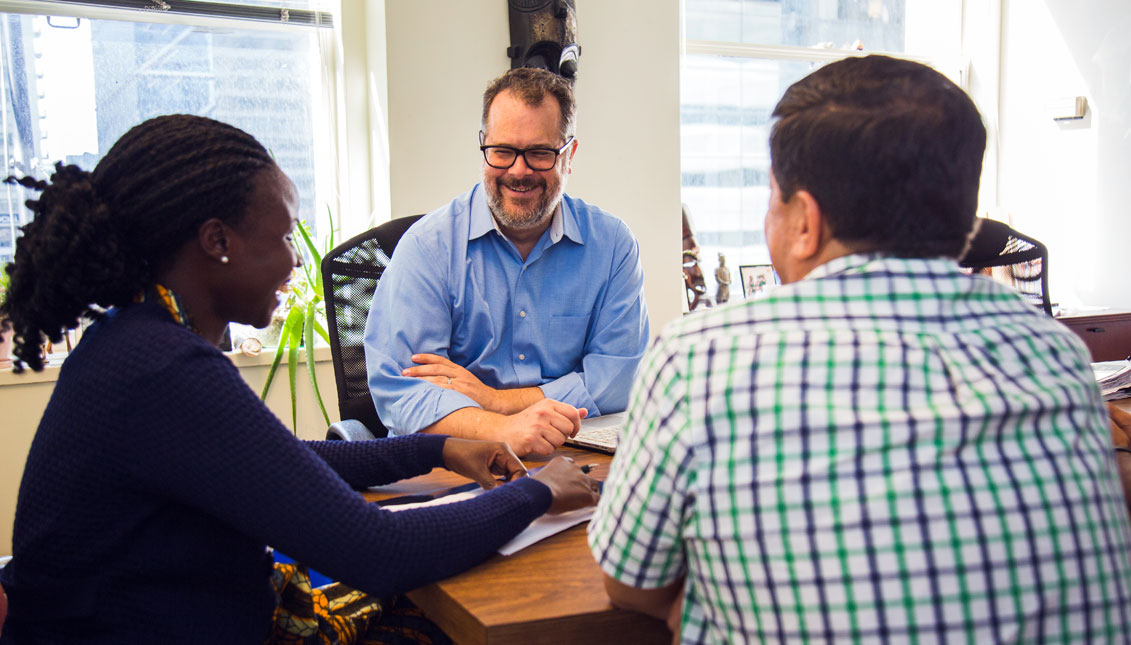 Peter Gonzales: Living a mission to serve immigrants in Philadelphia

In a conversation with AL DÍA, Peter Gonzales, President and CEO of the Welcoming Center for New Pennsylvanians, discussed what his Hispanic heritage means to…

Peter Gonzales remembers the impact that a trip he took to his grandfather’s homeland as a child had on his life.

“As an 11-year-old going to Europe for the first time, to a very rural part of Spain, it opened my eyes to how different parts of the world were from the place where I was growing up,” Gonzales recalled.

It was a small town in Galicia in the northwest section of the Iberian country, where his grandfather, Celestino Estevez-Gonzales, had been born and raised before immigrating to the United States at 17 years old. Here, Gonzales saw people living with little access to electricity, with families occupying homes where their farm animals were kept below the living quarters. He described a close-knit community surrounded by fields against the backdrop of a mountainside, a beauty contrasted by the “deep poverty” experienced by many of the area’s residents.

As a fascinated Gonzales learned about his grandfather’s roots during his visit, he also became fast friends with a boy named Diego, who lived “on the other side of the hill.” The two would play soccer and run around the woods together while the friendship provided Gonzales with an opportunity to practice his Spanish.

After returning home to Pennsylvania, Gonzales stayed in touch with Diego as a pen pal, a connection that furthered his budding understanding that the world was much bigger than he had thought, that it was home to vastly different people, lifestyles and perspectives than what he could experience in his own community.

The young Gonzales realized “that I could have friends and relationships with people who spoke different languages and grew up in different environments, different parts of the world, that had a common connection.”

“It was a new world for me,” he said, adding that the whole experience in Spain instilled in him a curiosity about other cultures and a desire to broaden his knowledge other nations through travel and study.

This outlook helped to inform the mission that would define Gonzales’ life’s work, from spending seven years at economic empowerment organization Project HOME, to working in the Philadelphia City Solicitor’s Office, to running his own immigration law practice for about a decade, to his current role as President and CEO of the Welcoming Center for New Pennsylvanians.

Founded in 2003, the Welcoming Center is a Philadelphia nonprofit whose work is based on the idea that immigrants play a crucial part in re-energizing and revitalizing communities, both as contributors and consumers. With this in mind, the organization provides services to immigrants in fields such as education, career development, entrepreneurship and civic engagement.

The ceremony is designed to honor leaders of Hispanic origin for their exceptional contributions in different professions in the Philadelphia region. Gonzales was honored in the field of Non-Profits. The remaining honorees were:

While Peter Gonzales was growing up, you might say that his paternal grandparents ran a Welcoming Center of their own.

Both of Gonzales’ grandparents were immigrants — Celestino hailed from Spain and his wife, Ada Schiavoni, from Italy. Together, the couple ran a restaurant called the Buck Hotel in Feasterville, Bucks County, just outside of Philadelphia, for 50 years.

“Over the course of that time, they helped so many people from their communities back in Spain and Italy to come over, to get on their feet, to get jobs, to support their families,” Gonzales explained, noting that his grandparents knew firsthand how difficult a decision it is to make to uproot one’s life and take a chance in the U.S.

His grandparents provided many immigrants with practical knowledge of the hospitality business, some of whom went on to start restaurants of their own. The couple also became engaged in their community, helping to fund Feasterville’s first police car and the first installation of a traffic light in the town, Gonzales said.

Through it all, the couple put long hours into their business, seven days a week, to maintain their American dream.

“They instilled that importance of working hard, serving others, creating opportunities for other people to flourish,” Gonzales reflected. “Those were all values that were imparted.”

These values have stuck with Gonzales throughout his life, and he lives them each day through the Welcoming Center.

“I have the opportunity to continue working with people from all over the world who have faced some of the same challenges and made some of the same kinds of sacrifices that my grandparents made,” Gonzales said.

In his role at the helm of the organization, Gonzales is able to provide immigrants with guidance to succeed. Not only does the organization help these people find employment opportunities, it helps them to make meaningful social connections. Not only does it assist entrepreneurs in starting businesses, it assists them in growing those businesses.

While discussing the organization’s efforts, Gonzales is quick to point out that he is only a small part of a team that strives to make the mission of the Welcoming Center a reality.

“I’m not alone doing this,” Gonzales affirmed. “I’m part of an incredible community of people who have found common ground, a common passion for serving others, helping others to realize their potential.”

Since joining the organization in 2012, Gonzales said he feels most proud of the work the Welcoming Center is doing when he hears about the impact that it has had on the lives of immigrants who have participated in its programs, and what it’s meant in their life.

“How it’s been transformative for them and helped them break the social isolation they were experiencing,” Gonzales said. “And helped them to reestablish their identity and their voice… It’s pretty powerful.”

It’s work that Gonzales is looking forward to continuing to be a part of, keenly aware that he would not be in the position he’s in today without the sacrifices of those who came before him, the immigrants who were able to navigate the challenges of U.S. society so younger generations wouldn’t have to.

“I was able to focus on my education and my having what essentially was a fairly normal childhood that wasn’t disrupted by migration or insecurity about whether or not I could stay,” Gonzales said. “I think, on some level, there’s an obligation that I feel to help others because I’ve had such incredible opportunities that were afforded to me that I didn’t earn.”

A Question of Identity

Gonzales admits that his Hispanic heritage is something that he has struggled with his entire life.

Gonzales has Hispanic ancestry on both his father’s side (Celestino) and his mother’s (her grandfather, Charles S. Martinez, came to Philadelphia from Cuba). However, his family’s heritage also includes Italian, Irish and African-American ancestry.

With this in mind, Gonzales asks himself: “What really defines who I am, my identity?”

“Is it in the sacrifices my grandfather made? Or is it in the work that I’m doing now? Is it in how I see myself in the context of my family? In my community? In my professional relationships?” he wonders, adding that considering such questions presents an opportunity to “dig deeper into understanding who I am and what my purpose and reason for being is.”

For Gonzales, he believes it’s important to recognize and celebrate identity as it relates to ancestry, as we do during Hispanic Heritage Month, but it’s also significant to acknowledge the beauty in our diversity, the coming together of cultures that the American experiment has allowed for.

“It’s important to celebrate who you are, where you came from,” he explained. “Generations of living in a country where there’s this diversity… You may get further and further removed from the stories of where your heritage is rooted, where your last name comes from, where the traditions that you may still be unconsciously practicing were formed.

“But you’re part of something that is an evolution of humanity in a way that I think is worth taking note of,” he continued. “And figuring out how we can support more of that diversity, more of that appreciation for individual identity, but also appreciation for our shared humanity, regardless of where we trace our heritages back to.”