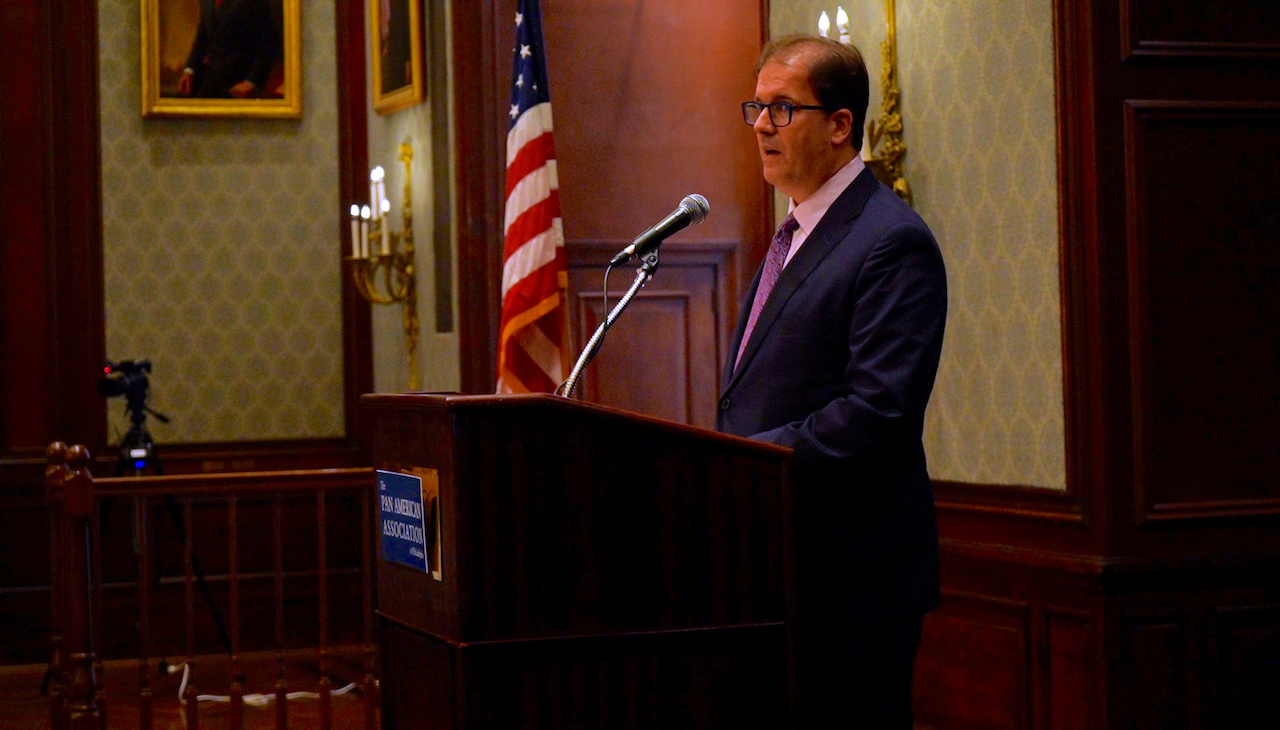 The Kimmel and Philadelphia Orchestra’s Matias Tarnopolsky received the William J. Clothier II award for his efforts to bring Philly arts to the hemisphere.

On Wednesday, Oct. 26, the Pan American Association of Philadelphia hosted its 82nd Annual Meeting with a luncheon at the Union League of Philadelphia.

In addition to a keynote address from the Brazilian Ambassador to the U.S. Nestor Forster, the organization also honored Matías Tarnopolsky, president and CEO of The Philadelphia Orchestra and Kimmel Center, Inc. with its 2022 William J. Clothier II Award.

Clothier was one of the business leaders to help found the Pan American Association back in 1940. In addition to bringing tennis to the Philadelphia region and helping it grow in popularity, Clothier also developed an affinity for Latin America during his time in the FBI and CIA, where he was posted in countries like Cuba, Chile and Peru.

The award in Clothier’s name goes to a Philadelphian who “exemplifies a dedication to public service and a commitment to the idea of pan-americanismo,” said PECO’s Jose Aguirre, who introduced Tarnopolsky.

“Maestro Tarnopolsky is an incredible representation of the Pan American Association’s mission,” Aguirre continued. “In honoring Matías, the Association reminds us to be grateful for talented Hispanic leadership at other important arts and cultural institutions in the region.”

When he took the podium, Tarnopolsky called the honor “profound.”

A native of Argentina, Tarnopolsky was two when his parents left their homeland to move to London. He grew up bilingual and is fluent in English and Spanish.

“I learned English at the same time as my parents,” he told the crowd at the luncheon. “To this day, and probably much to their annoyance, I still correct their English.”

The family would later move to Canada from London, but Tarnopolsky stayed to pursue his studies in music at King’s College. After graduation, he would work for the BBC for five years before moving to the U.S. in 1999, first settling in Chicago with a role at the Chicago Symphony Orchestra.

The Chicago gig would be the jumpstart to Tarnopolsky’s rise in leadership, as he would go on to take positions in New York City and the Bay Area before landing his Philadelphia Orchestra leadership post in 2018.

He’s led a very worldly life, but throughout it all, Tarnopolsky said he’s always maintained a connection to his Argentine homeland. It was instilled by his parents no matter where they went.

“My tether to home has not been based on place, but rather culture — the language, the sound of home, the music,” said Tarnopolsky. “It has been the profoundest link.”

In Philadelphia, Tarnopolsky admitted to not using as much Spanish as his previous posts, but said he hoped that would change in the near future. It’s vital given the idea of Pan-Americanism that was the theme of the day. At its center was a unifying goal of achieving greater global and cultural understanding, which Tarnopolsky pegged as “being more important now than ever before.”

“It’s now our mountain to take forward,” he said.

For his part, he said arts and music provide an “important answer” to that question of needing to build more understanding in the hemisphere and world.

“Whether you’re singing in a choir, playing a musical instrument, artists know that music voices thoughts [in a way] that words alone cannot,” said Tarnopolsky.

With that power, music becomes a “democratizing and unifying force.”

“Music is a celebration of our cultural connections that transcend language, time, space, boundaries and borders,” Tarnopolsky continued.

He ended by saying he hopes to bring some of Philadelphia’s musical prowess — via the Philadelphia Orchestra — back to Latin America in the near future.

The U.S., Brazil and Pan Americanism

After Tarnopolsky’s acceptance, Ambassador Forster took the stage and offered history lesson the long friendship between the U.S. and Brazil and how it ties into the birth of Pan Americanism.

For one, beyond the U.S. being one of the first nations to recognize Brazil as a sovereign nation — which Forster spoke about in a recent interview with AL DÍA — he told the crowd at the luncheon how legendary Brazilian leader Dom Pedro II was the first head of state from a modern nation to visit the U.S., when he did so in 1876.

“This historic visit laid the foundation and groundwork for a relationship, [in] which the bonds of friendship and cooperation between our countries would be forged and grow ever stronger,” said Forster.

He also said that those bonds would remain the same regardless of the outcome of Brazil’s elections this coming weekend.