Fields has been serving up American classics with an unconventional flair for over seven years. Photo: Montgomerynews.com

The cafe along the Schuylkill River recently celebrated its 10-year anniversary.

For over 10 years, the Trolley Car Cafe in East Falls has delivered classic American staples with an unconventional kick.

When Chef and General Manager, Jasmine Fields started at the spot over seven years ago after moving from upstate New York, she envisioned a multitude of activities she could also house in the historic brick building.

“I’ve always known that I wanted to work in hospitality,” she said. “Seeing a lot of regulars on a daily basis is one of my joys.”

Ken Weinstein and Fields then teamed up to take a new approach to what American Cuisine could look and taste like.

The story of how the Trolley Car Cafe came to be is just as unique as its name.

“The building was abandoned for over 50 years, it took a lot of time and money to get it up and running,” said Fields.

One thing that makes them unique from other cafes is their backyard kitchen garden, which they use for their endless homemade recipes.

“We grow tomatoes, cucumbers, arugula, and other vegetables, we use them in our cooking,” said Fields.

Before the COVID-19 pandemic occurred in March 2020, the restaurant had expanded its establishment to add more room for parties. “We used to host baby showers, holiday parties,” she said. “We also did salsa night and we provided food and beverages, we also had a comedy night where we did the same thing.”

After, the cafe had to think about eccentric ways to deliver quality cuisine to loyal customers.

“We have delivery services, and the delivery drivers are us. It is consistent and clean,” said Fields.

The eatery has also kept its staff in mind when Philadelphia allowed restaurants to reopen.

“Because I only have five or six staff members, my first priority is that they stay safe and so we have not done any indoor dining since before they mandated that we could not do it,” she said.

Although Fields is not allowing indoor dining, the delivery and take-out options have continued.

They also maintain outdoor dining despite the weather.

As of now, Fields and Weinstein have only been discussing reopening.

“We might open in mid-summer, we are being very cautious,” she said.

Fields is proud of her culinary creations and thrives on unique yet healthy twists on American favorites. “I made a meatloaf with chicken and turkey, I also add quinoa, which makes it healthier than traditional meatloaf,” she said. 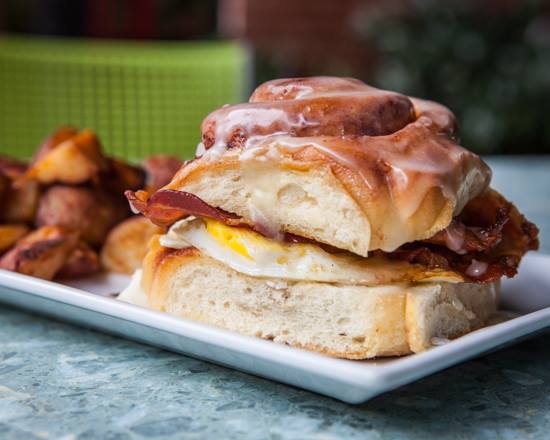 “It’s a full cinnamon bun and it has cheddar cheese, bacon, and fried eggs in it, people can also get roasted potatoes or grits on the side,” she said.

If you are a Philly local and have never been to East Falls, you’re missing out.

So go for a walk along the Schuylkill River and support Fields’ memorable cafe.