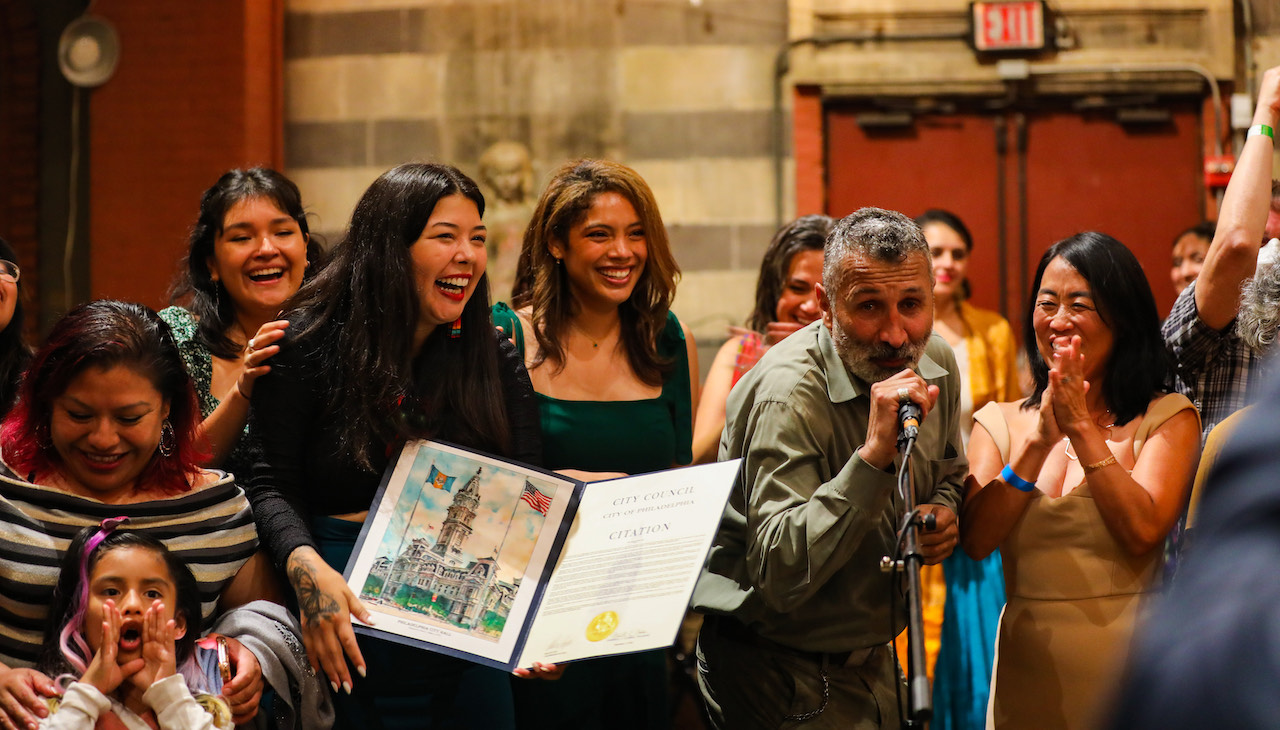 Juntos executive director Erika Guadalupe Nuñez and members of the Juntos staff and community are presented with a citation from Philadelphia City Councilmember Helen Gym for its 20 years of work in the community. Photo courtesy of Juntos.

Juntos at 20: Born in the community, and forever staying there

The longtime South Philly Latinx immigration and community org hit a major milestone over the weekend.

When Erika Guadalupe Núñez took the helm as the new executive director at Juntos in March 2020, she described the organization as going through a period of “deep, deep transition.”

It was founded and built upon 18 years of community work regarding immigration, youth development and teaching English to name a few, but when Nuñez came aboard there was only one other staff member in addition to herself and they only worked part time.

Add to that the city’s shutdown declaration on her first day on the job, and she had more than her work cut out for her.

“It was kind of like starting over in a lot of ways,” Núñez told AL DÍA two and a half years after that rocky beginning, as she and her staff of now 10 were planning Juntos’ 20th anniversary. “The pandemic actually forced us to really reckon with that.”

“What is it that’s working? What is it that’s not working?” were the main questions asked at the time. “There’s no room to entertain anything that is not for the best of the community right now.”

In answering those questions and developing a game plan — which started with a survey of some 2,000 community members about what they needed as the world traversed a once-in-a-lifetime pandemic — Núñez was putting her definitive stamp early on Juntos and its future, but also reasserting what the organization has always been about and its work in South Philly’s Latinx community.

Back in 2002, Juntos was the product of the change that was beginning to take root in South Philly. That was the immigrant Latinx community, which was arriving in big numbers from predominantly Mexico.

It was a tumultuous time to be an immigrant in Philadelphia, let alone the rest of the country, still raw in the aftermath of 9/11 that bred an animosity towards newcomers that still persists to this day.

“People were getting disappeared, picked up by police and then three days later went up into the detention center. [We realized] that there were databases, that there were people who were getting fingerprinted and that maybe police were calling ICE themselves and there was this collaboration,” former Juntos Executive Director Erika Almirón told AL DÍA in an interview from 2018, then celebrating 15 years of advocacy work in the community.

At the time, two University of Pennsylvania students made the journey south to the burgeoning community in hopes of starting an urban agriculture project. One of those students was Juntos co-founder Peter Bloom.

Their initial project idea was quickly discarded, and Bloom along with some other friends began using the basement of St. Aquinas Church to teach English classes to members of the surrounding community.

According to Núñez, those classes grew to address not only the language barrier confronting the community, but also issues of immigration, mutual aid, policing and safety.

A meeting in Montgomery County

Núñez first encountered Juntos at a protest she organized as part of the Migrant Power Movement at Montgomery County Correctional Facility in 2012. At the time, the facility had a contract with ICE, and local authorities were upping enforcement in local immigrant communities to fill beds.

She was one of three individuals arrested for blocking traffic to and from the facility, but before her arrest, Núñez remembers seeing members of Juntos in attendance wearing their green ‘Si Se Puede’ shirts.

“I remember hearing: ‘Oh, they’re from Philly, they’re here to support,’ and I remember being really touched,” she said.

That initial interaction left Nuñez wanting to know more about the organization, and she started attending more Juntos events, joined its group focused on issues confronting LGBTQ+ individuals, and began art-making for the organization’s various campaigns and protests.

The art-making hit a new level in 2013, as Juntos organized its first act of civil disobedience outside the old ICE headquarters in Philadelphia on La Dia de la Virgen de Guadalupe. Much like the protest she organized a year earlier outside Montgomery County Correctional Facility, the group blocked the garage doors that provided access to the facility, not allowing the transport of migrants out to detention centers across the state.

Núñez painted two banners in preparation for the action and screen printed a number of other posters.

“It began a shift,” she said of the action, specifically the use of visuals like the ones she created. “Art and culture became concrete tools that the organization was using in their protest.”

It also represented a shift for Nuñez in her relationship with Juntos, as she became its resident artist, continuing to create visual components for the organization’s many actions and programs.

Over the next eight years, Nuñez would hold a number of unpaid roles at Juntos beyond being its resident artist. Eventually, she would also sit on its board, but stepped down before the call went out for a new executive director.

“At the time, for me, that’s when it became really apparent that that’s what I wanted to do,” Núñez said of the opportunity to make her organizing career more formal.

She applied, got the job, and came into the role with energy and a number of goals for the organization that included establishing a formal membership model and investing more meaningfully into Juntos’ youth programs, but a world health crisis took precedence.

“We could have these goals for membership base building and in-person youth programming and a pipeline and all of that, but it actually meant very little without responding to the task at hand, which was the pandemic,” said Núñez.

Being there for South Philly’s Latinx community from the early days of COVID-19 also became personal for Juntos’ new executive director given her roots.

“I grew up in a community just like this,” said Núñez. “For me, it was very, very important to show up for my people however I could.”

Born in Sinaloa, Mexico, Nuñez migrated to the U.S. with her parents at a young age. She told AL DÍA that she grew up undocumented “all over,” but calls home Phoenix, Arizona.

There, Núñez experienced firsthand the harsh realities of being undocumented, as the state put in place laws like SB 1070, allowing law enforcement to request documentation whenever it felt like it from individuals it suspected were undocumented. She can remember her mom not letting her outside for months at a time in fear of such regulations ripping her family’s life apart.

Those barriers only became more numerous as Núñez’s family needed healthcare and she applied for college just months after another version of the DREAM Act was shot down in Congress.

They’re experiences known all-too-well in South Philly’s Latinx community and they continue to this day.

Just a month before the pandemic arrived in the city, a pregnant mother was detained by ICE outside of Eliza B. Kirkbride Elementary in South Philadelphia after she dropped off a child at school. She was released shortly after for humanitarian reasons, but it sent a shockwave of fear through the community.

Despite the constant fear and potential harm always present, Núñez still said it was a community that welcomed her with open arms in 2009, further emphasizing the personal importance of her work when the pandemic hit.

“Part of it is caring for them as if they’re my family too,” she said.

Her message to the community and all who would eventually come to work with or for Juntos under her leadership was as follows: “Solo el pueblos salva el pueblo.”

Born of a pandemic that exposed long-existing abandonment by government, big business, and the education system, it fell to the people of the community to come up with their own solutions and fight.

Juntos’ first answer to that challenge after surveying 2,000 residents in the early days of the pandemic was to launch a food bank, finding that food insecurity was the most prevalent issue in the community.

The same, community-centered motivations were also behind the organization’s Sanctuary Schools Movement, which spawned after the aforementioned ICE arrest of the mother outside a South Philly elementary school. Three months after it was launched, Philly City Council passed a resolution adopting many of its suggested measures for the school district.

These days, Núñez said discussions are more nuanced around the campaign, as it pushes for more beyond a cutoff of ICE cooperation.

There is also a bigger push to help more newcomer families, specifically those arriving in bigger numbers from Central America as opposed to just from Mexico.

Another campaign Núñez highlighted was Juntos’ shutdown efforts at York County Detention Center that freed 113 migrants before their transfer to other facilities.

Juntos through the generations

All of that work was put into perspective for Núñez in planning for its 20th anniversary gala, held on Saturday, Sept. 17 at the Fleisher Art Memorial.

“The fact that an organization like Juntos has made it 20 years is an amazing accomplishment,” she said. “Juntos has only ever grown what it was set out to do, which was to support our immigrant community members with whatever they needed, following their leadership.”

In the process, she said it’s been “humbling” to meet some of the different generations of the organizations and to see its mission “strengthen and grow.”

A long way from being the only employee at the start of the pandemic, Núñez now also has a team of 10 continue carrying out impactful work and try new things.

A permanent home and new frontiers

On the new end, she said the organization will use whatever it raised from its gala to go towards the construction of a permanent home in South Philly for Juntos. Campaign-wise, it will also be registering voters for the first time in its history.

The new effort is an evolution of Juntos, right alongside the community it has called home for 20 years.

“When Juntos was founded, it was giving English classes to a group of people. All of those people had kids and now they’re of age to vote,” said Núñez of the new campaign’s origins.

With that new generation and campaign of voter registration, there is an immense excitement within the organization about potential impact and hope for the future.

“You can be civically engaged in a way your family wasn’t,” was Núñez’s message. “You guys could be the change that we want to see.”