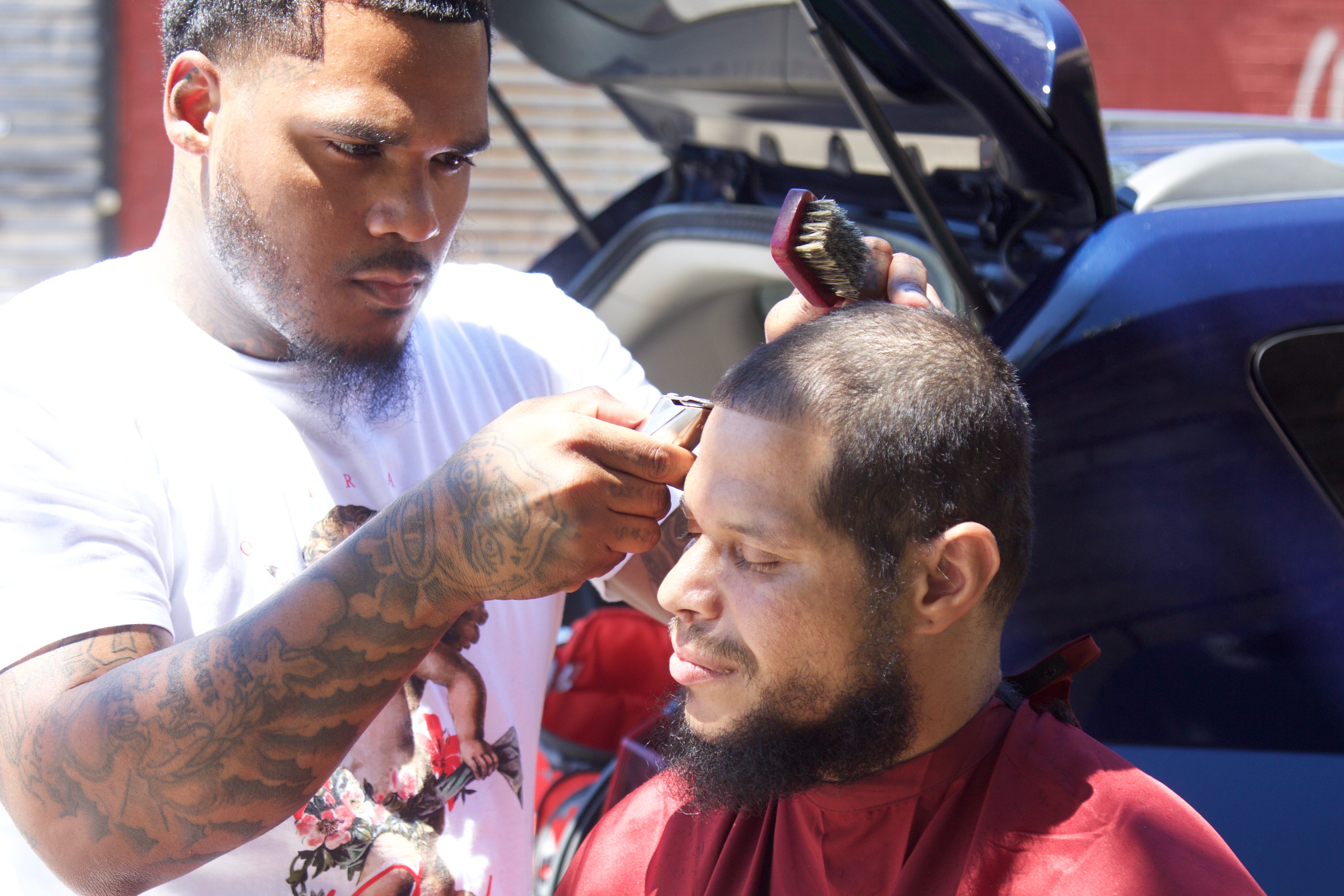 The line forms slowly at first, with one or two people gathering, as others pass by and inquire about what’s happening: A man with a razor, trimmer, and other barbering tools plugged into the back of his car cuts the hair of someone seated on a chair before him. The scene unfolds among the tents which serve as many people’s homes under the bridge at Lehigh Avenue and Emerald Street in East Kensington, one of the neighborhoods most plagued by the opioid crisis in a city with nearly 26 percent of the population living in poverty.

A few people stop by in a van filled with watermelons, water, and food, greeting some familiar faces in the row of tents. Soon after, shouts are heard — a man living under the bridge has had his stuff stolen. A few people in line for their haircuts, who have had experience with life on the streets, watch his despair and rage with some sense of recognition, recounting in a low voice the times that they themselves have been robbed of what little they owned and carried with them while they slept on park benches or trains.

Through it all the buzz of Josh Santiago’s trimmer continues as he works silently, carefully, artfully — exchanging words but almost always with his head down, focused on his work. The man in the chair remains still, eyes closed, with the muscles in his face gone slack and smooth. A moment of repose, of surrender — a brief rest in which that individual can entrust some aspect of their well-being into someone else’s hands.

Santiago always approaches people on the streets by introducing himself, what he does, and asking, “Is there any way possible I could bless you with a haircut today?”

Many, like Robert Pullins, take him up on the offer. Pullins waited in line for a half hour under the scorching sun that day. He had been homeless for a while and planned to start a truck-driving job in the following week which would help stabilize his economic and living situation.

“I feel rejuvenated. I feel fresh...I feel handsome,” Pullins said with a laugh when he emerged from the barber’s chair. “I feel good-looking now. And I feel a boost of my spirit.”

As both a barber and a storyteller, Santiago is intent on giving haircuts and serving as witness to the struggles of those who are experiencing homelessness throughout Philadelphia and beyond. He knows many of their stories backwards and forwards, not just because he remains dedicated to “blessing” people with haircuts, a service he has been providing to the homeless for almost a year now, documenting their stories on Instagram through his Empowering Cuts initiative. But his drive also comes from the fact that he is all too familiar with the cycle of addiction, poverty, and incarceration which is threaded throughout the lives of those who sit before him in the barber’s chair.

Like some of those gathered under the bridge in Kensington that day, Santiago was born to parents in Philadelphia who struggled with drug addiction. As a child growing up in Hunting Park, he looked up to his older brother as a rock, a foundation, but as he got older Santiago began to follow his hero down the path of selling drugs and being charged with other petty crimes. He was poised to continue a vicious cycle.

“Especially growing up in a neighborhood like that, it’s kind of hard to do something different when everybody is doing the same thing,” said Santiago. “It’s kind of hard,” he repeated.

Santiago, though, has now taken a path different from the one that had been paved by his circumstances, and carved by the struggles of those before him. A few years ago, after coming home from serving a 14-month jail sentence for a drug-related crime, Santiago made the decision to step towards a different life and make real his dream from childhood: to become a barber.

He commuted on average five hours a day roundtrip from his home in North Philadelphia to the American Beauty Academy in Wilmington, DE, taking classes and doing volunteer work. While there, Santiago had his first experience giving a haircut to someone living at a homeless shelter when his professor took his students there to put their knowledge into practice by offering free haircuts. It was a new experience, said Santiago.

“Being able to bless somebody with a haircut was a different type of feeling than to actually receive money for it,” he said.

After graduating, Santiago held on to that feeling, and started Empowering Cuts in 2017. He still pours his own money into the initiative for barbering tools, gas, camera equipment, and more, providing for himself and his three children he is currently raising on his own by working as an Uber driver and cutting hair for personal clientele. He is also raising money through a GoFundMe drive to raise $50,000 to eventually purchase an RV for a mobile barbershop that would enable him to cut hair for people experiencing homelessness in Philadelphia and throughout the Tri-State area.

Santiago has also worked together with another barber and two other community members to organize an initiative called Philly Neighborly Love to provide free haircuts and food to those experiencing homelessness in Philadelphia and other cities in the Mid-Atlantic region.

For Santiago, the interviews and story he posts via Empowering Cuts serve as yet another way to raise awareness for what he does and homelessness as a whole. He receives a lot of support from social media, and often invites his Uber riders to check out the Instagram feed, even if they are from places other than Philadelphia.

However, despite considerable support and positive feedback, Santiago is still frustrated and discouraged by the lack of response, and the overwhelming weight of the issue of homelessness and addiction.

Santiago recalled how someone he had recently interviewed spoke about “how their mom played a big part in their addiction” by exposing them to drugs.

“This is real life stuff,” he said.

Gloves off, reaching out

Santiago never uses gloves when cutting people’s hair — though he knows that other people would recommend it as a necessary sanitation measure. But that, for Santiago, goes against what he sees as his mission, which is not simply trimming, shaving, and clipping hair to make someone look and feel good, but also honoring each person who sits before him with respect and dignity — something poverty and homelessness too often strips away from the individuals confronting those struggles.

“At the end of the day, if I’m already down and out and I feel this way about myself, the only thing that I need is somebody touching my head and they got gloves on,” Santiago said.

And it’s true, he added, that one of the needs of those who are homeless, one of the unbearable aspects of the situation, is the physical and emotional isolation which it causes, making it more and more difficult for many individuals to recover from issues that led to homelessness in the first place.

But his work also fights that isolation, he said, explaining that it’s not uncommon for someone to cry from emotion after a haircut, and he often has deep conversations with those who sit with him.

“All the time I come and cut hair in the Kensington section and it’s nothing but brother this, and cousin this, and mind you I’m not related to none of them, but they’re like my family,” Santiago said.