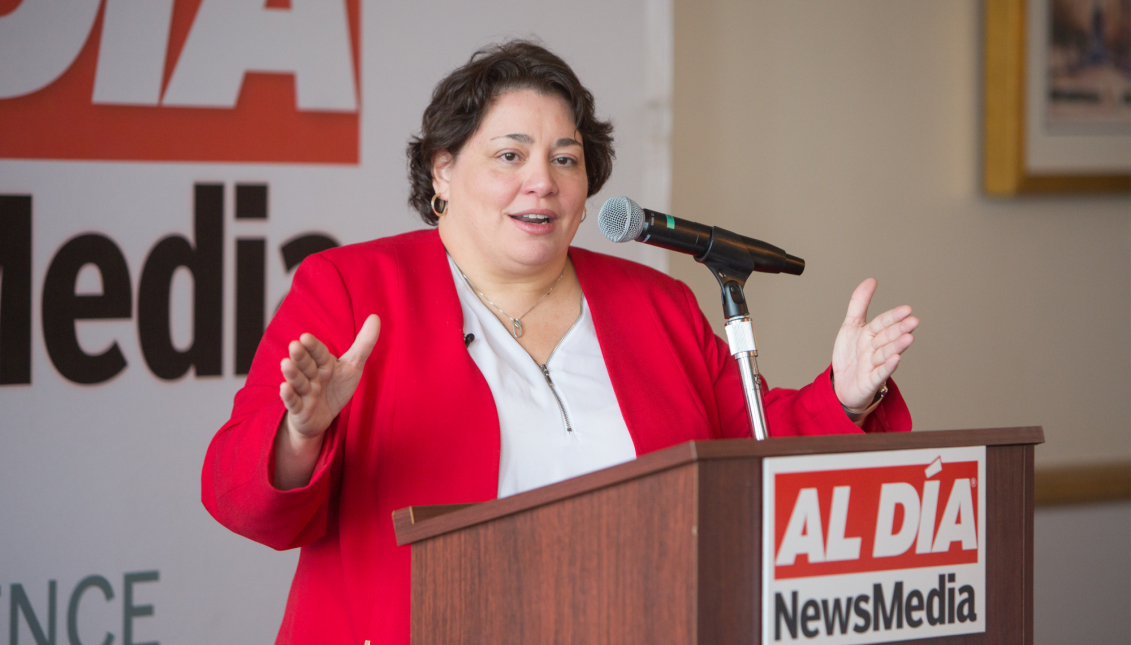 At the first AL DÍA Forum, Deborah Santiago, co-founder of Excelencia in Education, showed representatives of higher education institutions how they can help…

This story appeared in the December 6, 2017 issue of AL DÍA

For Danny Cortés, it was a moment that indicated a great deal about the state of Latino education in Philadelphia.

It happened 30 years ago, when the current Executive Vice President and Chief of Staff of Esperanza College was a pastor at the First Spanish Baptist Church of Philadelphia in the city’s Norris Square neighborhood. Cortés remembers a particular Sunday school class he taught when a young Latina introduced herself as an honor roll student attending one of the area’s high schools.

Impressed by that distinction, Cortés asked the girl if she would begin the class by reading aloud a verse from scripture. This verse, he noted, was not a difficult one, but the student struggled to read the text and found herself “stumbling through the passage.”

Cortés’ own daughter, an eighth grader at the time, had to help the older student decipher the words.

“Now this was an honor roll student from the school district here in the city of Philadelphia,” Cortés reinforced. “Defined as honor roll when, for all intents and purposes, she was on the scale of functional illiteracy.”

Cortés recounted this story to the 50 or so higher education professionals gathered on Thursday, Nov. 30, for the first-ever AL DÍA News forum, which focused on Latino achievement in post-secondary education, titled “Advancing Latino Success in Higher Education: What We Know and What We Can Do.” The event was held at the Pyramid Club.

Esperanza College is the only Hispanic Serving Institution (HSI) in the state of Pennsylvania, meaning Hispanic students comprise at least 25 percent of all students enrolled full-time at the institution. As a representative of the college, Cortés addressed the audience before a presentation from nationally renowned expert on Latino education, Deborah Santiago.

Today, three decades after that Sunday school class, Cortés said “little has changed” regarding Latino education in Philadelphia, as largely Hispanic public schools in the city “continue to be at the bottom rung of academic performance.”

The pipeline from urban school districts to institutions of higher learning is broken, Cortés said, and “Latinos are primarily an urban-based people.”

Overcoming such difficulties facing Latino achievement in higher education is a massive and intimidating undertaking, but Cortés affirmed that “we are not called to cower at the challenges or make excuses; we are called to figure it out.”

“Advancing Latino success in higher education is not for the faint of heart,” Cortés said.

A champion for Latino academic achievement

For Deborah Santiago, challenges such as the one highlighted by Cortés create an abundance of opportunities for institutions of higher learning to better serve Latino students.

Santiago has made Latino attainment in education her life’s work. She is the former Deputy Director for the White House Initiative on Educational Excellence for Hispanic Americans. She is also the co-founder, Chief Operating Officer and Vice President of Excelencia in Education, an organization that advances the success of Latinos in higher education through data-driven analysis and by advocating for institutional practices that support the academic achievement of Latino students. Her research has influenced policy on state and national levels.

Speaking with an undeniable passion for her subject, Santiago noted that progress has been made in recent years in Latino educational achievement, but she shared with her audience a daunting statistic. While Latinos across the country are pursuing higher education at a greater rate than ever before, degree completion rates remain low — she noted that only 15 percent of Latinos hold a bachelor’s degree or higher compared to the national average of 39 percent.

“That’s an attainment gap that creates an opportunity for action,” Santiago said.

Prior to the forum, Santiago told AL DÍA News that she hoped to “inform, inspire and compel action” with her presentation.

“I want to bring an institutional perspective that can arm those who are working in institutions with what they can do to improve Latino student success where they are,” Santiago said. “With whatever perch they have.”

Santiago said that Latino students are likely to be first-time college-goers, and she outlined some of the major hurdles that many of these students face in achieving academic success.

Santiago knows that not every leader, faculty member and administrator in higher education is (or will be) empathetic to the challenges hindering Latino achievement. With her efforts, Santiago strives to provide the educators that understand the importance of advancing the success of Latino students with the necessary resources to start a meaningful, lasting dialogue on the subject with their colleagues and superiors.

Santiago broke down what it means for an institution to serve Latino students, as well as a number of ways that institutions can accomplish that goal, into three categories: data, practice, and leadership.

Collecting and understanding the data on Latino educational achievement is crucial, Santiago said, especially when communicating the needs of Latino students to policy makers or institution leaders who are not motivated by important issues regarding “equality, equity and social justice.”

In conversations with such people, Santiago said it’s helpful to highlight the fact that Latinos are a young, fast-growing segment of the U.S. workforce, and ensuring this workforce is well-educated will benefit the whole of society — according to Santiago, one of every two people paying for social security in the next 30 years will be "black or brown."

Santiago asked the members of the audience if their institutions are giving adequate financial support to Latino students, and whether the institution’s faculty reflects the diversity of the student population.

She also stressed that it is not enough to keep track of how many Latinos their institutions are enrolling; it is vital to know how many are graduating as well.

“Access is important, but that can’t be where we let it go,” Santiago said.

Santiago outlined a number of practices that have proven to be useful for many educational institutions in ensuring Latino students complete their degrees:

Santiago noted an important distinction: when it comes to programs that aim to improve Latino achievement, it’s quality over quantity.

“It’s not about the number of programs,” Santiago said. “It’s about the level of impact.”

Santiago asked her audience to consider whether their schools are intentionally including Latinos in their practices, and if so, is there evidence that this participation is affecting student success? And if Latino students are not participating in these programs, why not?

For example, if a college offers a tutoring program, have the Latino students who must commute to school while maintaining jobs been taken into consideration?

“You can have the best support service programs on your campus and none of our students are participating in them,” Santiago said. “They’ve got lives. They’ve got things to do. How do we rethink our support services to make sure we’re including students who have those kinds of realities?”

Considering many Latino students are first generation college students, their parents and families are often unfamiliar with the level commitment that higher education demands. This misunderstanding can lead to family responsibilities overwhelming the student and obstructing their chances of degree completion.

However, Santiago has seen institutions experience success in communicating student needs to Latino parents through orientation programs that are specifically tailored for that purpose. Addressing parental misperception can make all the difference.

“If parents know, they will be your best ally and advocate in making sure that student gets the support they need outside of the classroom for their success,” Santiago told the audience.

Perhaps most importantly, Santiago said that if an institution is genuine in increasing Latino enrollment and achievement at their school, then that school needs to be intentional in its efforts to develop a trusting relationship with the Latino community. Institutions cannot expect Latino students to happen upon them as academic options. The schools should be the ones to reach out.

An educational institution’s leadership must be committed to better serving Latino students to do so in a meaningful way, but Santiago noted that this commitment cannot end with a school’s president or board. It is critical for an institution’s staff and administration to agree upon and implement a vision, working together toward a goal of ensuring the success of Latino students “as part of serving all.”

Donald B. Taylor, President of Cabrini University, has worked to build such an environment at his institution during his four years at the helm. Closing the forum, Taylor spoke of how Cabrini, which is considered an emerging HSI, has doubled its diversity in the past five years.

The university went from having a two percent Hispanic population to 17 percent within a three-year period, and in 2017, the majority of students admitted were students of color. One way Cabrini has made these strides is through forming partnerships in K-12 school districts with high minority populations throughout the Philadelphia area.

Taylor said he has also worked to ensure Cabrini’s staff is in harmony with the institution’s inclusive vision. The school has invested heavily in daylong and multi-day workshops where teachers learn tools to be successful in intercultural education. Taylor said he requires all of his faculty members to attend.

The Cabrini President noted that this type of training cannot be a one-time-only deal.

“It has to be ongoing professional development,” Taylor said. “Every single year, every single semester  because you’re bringing new people into your organization all the time.”

Santiago hopes that one day her efforts will no longer be required and that all educational institutions will ultimately see the value in promoting Latino academic achievement. While progress has been made, Santiago knows there’s still a lot of work to do — and an increasing number of educators are ready to step up and help.

“If I have to convince people that this matters, I can spend all of my time doing that, but there are people ready, institutions ready to do more,” Santiago said. “That’s what we need to capitalize on and show people what’s possible.”

For information and resources on Latino academic achievement, visit edexcelencia.org