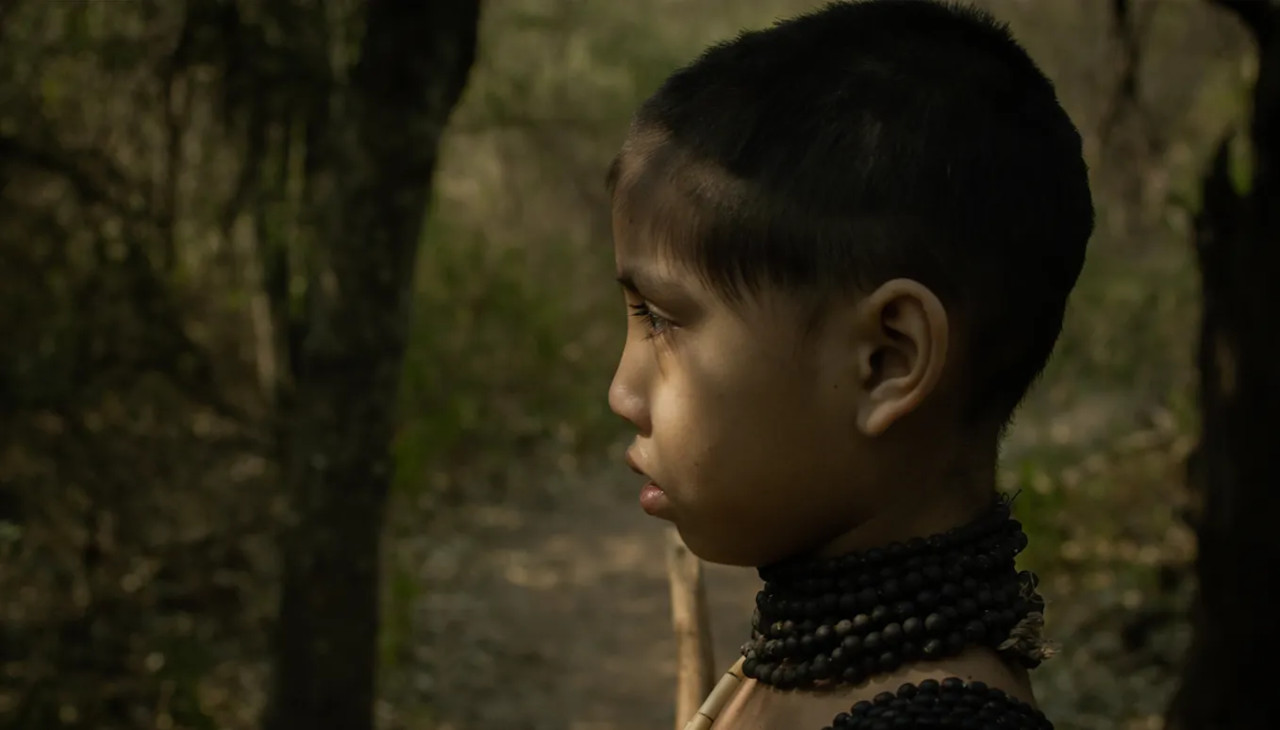 The film EAMI tells the story of a Paraguayan girl of the Ayoreo ethnic group who, faced with the advance of deforestation caused by the white man, must look for a new home far from the jungle. Photo: Courtesy.

What would you do if one day you were forced to leave your home, and once you left, you would never be able to return?

That is the story of expulsion and uprooting portrayed in the film EAMI, winner of the Tiger Award at the Rotterdam Film Festival in 2022.

“EAMI means ‘forest’ in Ayoreo. It also means ‘world.’ The Ayoreo-Totobiegosode Indigenous people make no distinction: the trees, animals and plants that have surrounded them for centuries are all they know. They now live in an area that is experiencing the fastest deforestation on the planet.” This is the synopsis of the film directed by Paraguayan filmmaker Paz Encina.

The film, recorded entirely in the Indigenous language, follows Eami (played by Anel Picanerai), from the Ayoreo-Totobigosode people settled in Chaidí, in the heart of Paraguay’s Chaco. This arid territory is located 600 kilometers from Asunción, the capital, very close to the border with Bolivia.

EAMI, awarded with the Tiger Award at the Rotterdam International Film Festival, is a complete visual poetic narrative centered on a girl facing the destruction of her community. She is forced to leave her home, the jungle, and the only place she knows, to start a journey that will lead her to salvation and survival. This journey, that wraps her in fear and uncertainty, leads her towards the white world, the same one led by people her ancestors have baptized with the name of coñone, translated to English as foolish.

The film, which has also had a special mention at the 34th edition of the Toulouse Film Festival, is currently being presented in Argentina and will have its official premiere in Paraguay in May.

FROM LOVE… TO EXILE

After having produced short films and feature films, Encina was looking for a love story worthy of being brought to the big screen.

“I wanted to do something very simple until a friend told me: 'I know where that story is, it's in the Ayoreo community.' It was a story about two brothers who fall in love, but we went to Chaco and the Totobigosode told me: ‘Yes, that story exists but we are not interested in you saying that, we are interested in you talking about it,” the director said in an interview with AL DÍA, from her residence in Paraguay.

The community's response to her initial idea confused her, but after serious consideration, she decided to move forward.

“I thought: ‘Maybe this movie is calling me’, because it's something I’ve always talked about: exile, diaspora, loss… I think that movies look for you because there are things that must be told,” she said.

Without hesitation, Encina — guided by her friend José Elizeche, who has been working with the Indigenous group for 20 years — traveled to Chaco.

“Most leaders are people who were in isolation, came out of the woods, and went through a traumatic process, so it is not so simple to come and say: ‘Hello, how are you?’. The relationship was built cleanly because José was with us,” she said.

Supported by one of the leaders of the community, the filmmaker immersed in a world where many Paraguayans feel foreign, despite belonging to a bilingual country (Guarani and Spanish) with an indigenous legacy. “We have many prejudices about them… we believe they are slackers, that they do not want to do anything, but for them it is much more important to get up and be together before entering into a concept of productivity and production”, Encina said.

It is precisely thanks to this film, shot over six years, that Encina was able to understand how the Ayoreo view the world and their way of being, the same idiosyncrasy that marked the development of EAMI from beginning to end. “The first to do the casting were José and the Ayoreo leader; after that, I shared my technical point of view. We also had to ask who wanted to be in the film, because there were people who did not want any part of it. [...] And I understand because many of them were deceived regarding money; also, they wanted to safeguard their children from whites. Besides, there is prostitution and abuse, and the cinema is very invasive because one lands and lowers the equipment like it is a normal thing for the, but it is not”, she recalled.

However, the greatest lesson for Encina has been “the importance of being where one belongs”. “We offered them what we ate and the way we lived, a room with a bed because we thought it was the best. But our food was not good for them, and they also asked for a bigger room to stay all together. The only thing they wanted was the tour to end to go back home. That way, what I learnt is the importance of respecting peoples’ right to belong to where they want”, said Encina.

A REALITY BEYOND A TREND

Many new productions about stories of the uprooting of Indigenous communities in Latin America have been released in theaters in recent years.

Beyond considering them part of a trend, Encina believes that it is the expression of cinema’s commitment to make a reality visible to society.

“We know that we are descendants of indigenous people, and that it is part of our history, of our being, of everyday life. The Spanish linguist and anthropologist Bartomeu Meliá, a staunch defender of indigenous rights in Paraguay, once said a phrase that seemed brilliant to me: ‘Paraguay’s great misfortune is that it descends from indigenous people, speaks an indigenous language, and does not want to be indigenous.’”

The director hopes EAMI will be a message to the political class to guarantee the protection of the rights of Indigenous people living in voluntary isolation, and promote precautionary measures to stop the indiscriminate deforestation in their ancestral lands.