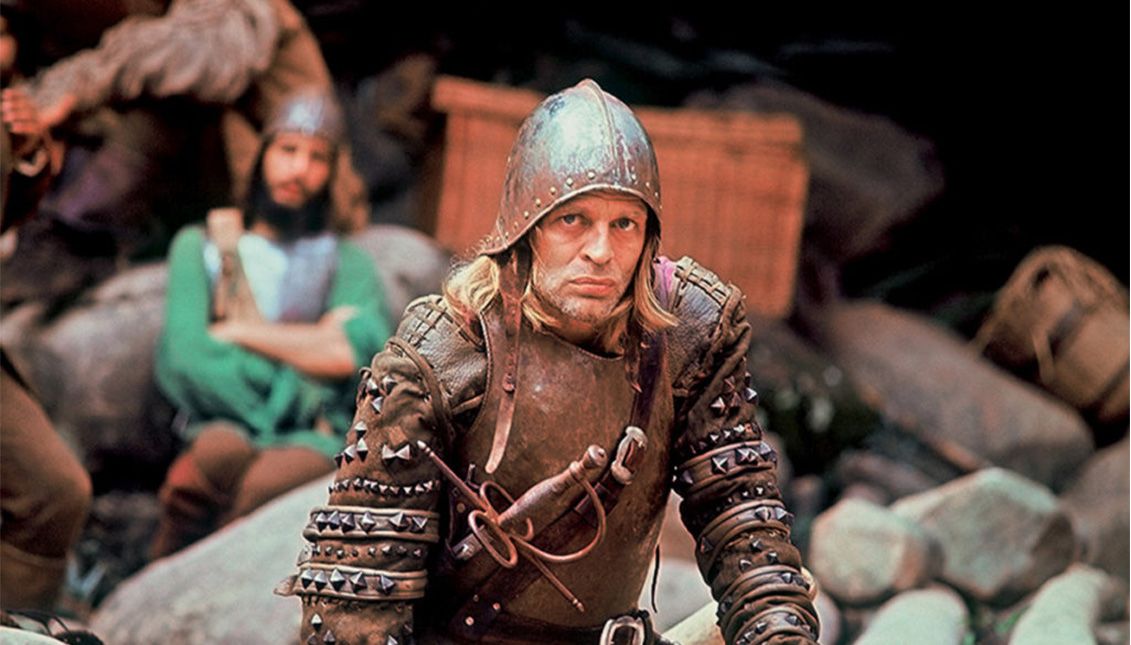 Klaus Kinski, the reincarnation of the "Crazy Aguirre" in Aguirre, The Wrath of God.

From Ridley Scott's 1492 to Herzog's poetic description of "Crazy" Aguirre, this is how the Conquest of America has been narrated by filmmakers from all over…

Based on a 15th century epic poem by Alonso de Ercilla that narrates the confrontation between the bloodthirsty Pedro Valdivia and the Araucanians in Chile, the film, a mixture of a western of conquest and adventure cinema, is one of the few works about the conquest of South American cinema.

The Araucanian (La Araucana) was a Chilean, Spanish and Italian co-production directed in 1971 by filmmaker Julio Coll, which at the time outraged both Chileans and Europeans because of the director's deficient characterization of the Araucanian (i.e., Mapuche) people, who were portrayed as a sort of hippie commune.

Aguirre, The Wrath of God

Directed by the brilliant German filmmaker Werner Herzog and starring a crazy Klaus Kinski who fits the character of no less crazy explorer Lope de Aguirre like a glove, this iconic 1972 film tells the equinoctial adventure of the Basque explorer in his search for the mythical city of El Dorado.

The risky journey from the Peruvian Andes through the jungle becomes a nightmare full of cruelty where Aguirre will try by all means to make his legacy in the land, including trying to marry his daughter, who travels with them.

Besides the great cast and Herzog's reading of Aguirre's eagerness to dominate and his fanaticism, priceless are the anecdotes that occurred during the shooting of the movie, which could well lead to another film: Kinski reached such a degree of mimicry with the character that he almost killed one of the actors by hitting him on the head with his sword.

A curious approach to the character of the explorer Alvar Núñez Cabeza de Vaca — the first European to contemplate the Iguazú Falls — where it is revealed to us not only his adventurous zeal and personal ambition, but also some of the most "eclectic" spiritual desires.

The film tells how Cabeza de Vaca was taken as a servant by some Indians after surviving Panfilo de Narvaez's failed expedition through Florida. In the service of the natives, the explorer adopted their customs and even their practice of shamanism prior to a new expedition through what today is the Sinaloa Desert in Mexico.

Directed by filmmaker Nicolas Echavarria in 1991, Cabeza de Vaca is a highly recommended and historically rigorous film, like most movies about the period of Mexican production. It stars Spanish actor Juan Diego, in a superb and complex characterization as the legendary explorer and based on the book, Naufragios (Shipwrecks), written by Cabeza de Vaca himself.

1492, The Conquest of Paradise

It is curious that this film directed by Ridley Scott became the official film of the 500th anniversary of the arrival of Christopher Columbus to America.

The criticism of the Hispanic empire is more than evident in the story, especially as it highlights the Genovese origin of Christopher Columbus, played by a brilliant Gerard Depardieu, who visits Isabel the Catholic  — played by Sigourney Weaver — to ask her to finance his company to find an alternative route to the Indies.

Although not as historically rigorous as it should be, 1492: The Conquest of Paradise (1992) is a film full of adventures that tries to explore the wheeling and dealing of the countries that wanted to divide the American lands as if it were Monopoly.

Directed in 2010 by Spanish director Iciair Bolliain, the film makes an interesting reading of the second "colonizations" and current oppressions in Latin America through contemporary neoliberalism, making a paragon with the conquests and depicting their prolongation.

In Bis: También la lluvia, Bolliain tells the story of a film director (Gabriel García Bernal) and a producer (Spanish Luis Tosar) who arrive in Bolivia to make a low-budget film about Christopher Columbus and the filming is hindered by the water war.

The protest in Cochabamba in 2001, when the government privatized the water service by giving exclusive rights to rainwater to a single company.