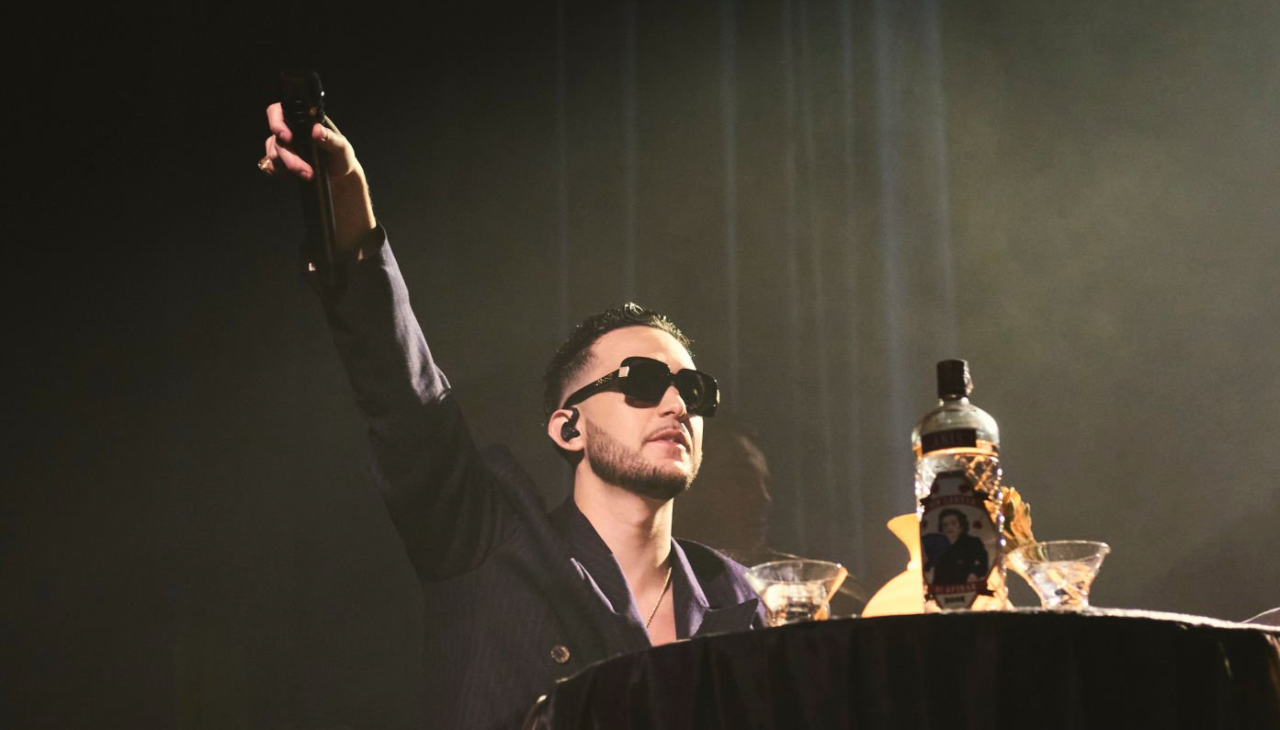 Latin rhythms seem made for Pucho. El Madrileño teased his fans in Latin America, where he will soon perform.

It started 20 minutes late, but El Madrileño knew exactly what he was doing. He played into the expectation, and when he arrived… 16,000 souls fell at his feet.

The attendees already knew the entire concert would be recorded: What is this, a movie? No one could imagine what the three-time Latin Grammy winner was planning on that Saturday night in Madrid.

The curtain opened and “Still Rapping” resounded at the WiZink Center — the arena chosen for the third show of the Sin afinar ni cantar tour. It will take C. Tangana to other Spanish cities, England, and also Argentina, Colombia, Mexico and the Dominican Republic. The last four are countries from a region close to C. Tangana’s heart as he mentioned at the Grammys.

"El Madrileño began in Latin America and spending a lot of time in the United States made me realize how similar Latin America was to Spain. I am a fan of Latin music. There are many things that connect us," he said.

Wearing a black suit and dark glasses, Antón Álvarez Alfaro appeared in his hometown not only to play a show, but also to have fun “with his beloved ones.” He looked thrilled from the outset, and later said: "We are probably at the best concert of my entire f*cking life."

"Everyone has asked me why I haven't set 8,000 dates, which is what I should have done from the beginning, but the finales and important moments like this happen only once in life and are made for those who are there," he continued before thanking fans of all ages in attendance. The show in Madrid sold out three months ago.

The stage set-up included a nearly identical recreation of his NPR Tiny Desk, and two screens on either side of the stage for filming.

For the occasion, C. Tangana was surrounded by emerging and famous Spanish musicians, and acted as a host on a stage that looked like a restaurant with tables, lights, lamps, waiters, all kinds of spirits and tobacco smoke.

Niño de Elche, the Carmona family (Marina and Antonio among them), Kiko Veneno, along with guitars and trumpets helped him run down music set with songs like “Comerte entera,” “Demasiadas mujeres,” “Hong Kong,” “Ingobernable,” “Los Tontos,” “Veneno,” all considered hits from his latest album El Madrileño: the best-selling album in Spain in 2021.

Another hit played during the show was “La culpa,” which was performed by Omar Montes. The crowd sang the song as if it were a classic, but it was just released in February 2022 on El Madrileño. La sobremesa.

One of the biggest moments was performance Nathy Peluso. What could C. Tangana have done without the rhythm and swing of the Argentinian? They sang "Ateo" together, the song with the music video in a cathedral. In Madrid, it shook the ground of the WiZink Center.

La Húngara did the same throughout the show, especially during one of the final songs: "Tú me dejaste de querer," which capped off the madness and delirium of the fans, who had forgotten about the pandemic and its restrictions for the night.

During the show, fans enjoyed a mix of music and rhythms. The set went from the rap of “Tranquilísimo,” and then flamenco, followed by a version of “Suavemente” by Elvis Crespo.

After two hours, the concert finished with “Veneno,” and the those in attendance accepted their idol's farewell without an encore.

Sipping cava, Antón Álvarez closed his performance between kisses, hugs and pats on the back from all his guests.

Call him Pucho or Puchito, El Madrileño or Crema. Call him, Anton, if you want. What C. Tangana has proven, is that at 31 years old, he could be a prophet in his own land without “singing or tuning.”